Rumble at the OAS: Colombia vs. Venezuela 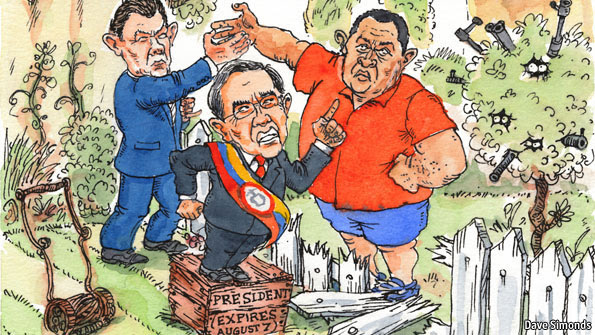 Colombia's Ambassador to the OAS, Luis Alfonso Hoyos, today made his country's case before the regional body that Venezuela is not living up to its obligations to keep FARC guerrillas out of Venezuelan territory.
In a flurry of diplomatic posturing that included maps, photos, PowerPoints and calls to check out YouTube videos, Hoyos said Venezuela was effectively harboring 1,500 FARC members.
Venezuela's president, Hugo Chavez Frias meeting in Caracas with Argentine soccer coach Diego Maradona, reacted swiftly to the Colombian allegations by announcing that he would sever all diplomatic ties with Colombia.
"I announce with a tear in the heart: Venezuela breaks off from this moment all relations with the government of Colombia," Chavez remarked to reporters in Caracas.
Back at the OAS, Venezuelan ambassador Roy Chaderton scoffed that the Colombian evidence was barely convincing.
One thing that is certain from today's events is that Colombian-Venezuelan relations have hit a frightening low. The brush-up and war talk that followed Colombia's assault on a FARC camp in Ecuadorian territory in 2008 led each country to high alert. Now, just two weeks before president-elect Juan Manuel Santos assumes the Colombian presidency, he'll inherit a dangerously tense situation with his Venezuelan counterpart.
Chavez repeatedly attempted to provoke Santos during the Colombian election, but Santos has made some small gestures in the lead-up to taking office that seemed meant to extend a tentative olive branch to Caracas.
The decision by Colombia and Uribe to make the large OAS showing may be Uribe's last parting jab at his arch enemy, as well as a way to ensure that the Santos administration is left with no flexibility to engage Chavez.
Uribe is digging a deep hole for Santos to climb out of, especially since provocations against Colombia only bolster Chavez's standing at home. After today's developments, we hope that cooler heads can prevail and stave off an escalation of tensions.
Image Source: The Economist (by Dave Simonds)
Online Sources: AFP, Reuters, El Pais, The Economist, Miami Herald, Curvas Politicas (Twitter), BBC
Posted by Ben G. at 1:01 PM

de Clermont - I saw the video of Chavez' "hurt feelings" and severing of diplomatic ties. If he were not dicta-dente de VZ he could be a soap opera actor, but of course the villain. I hope the VZ military comes to the rescue of its citizens.