Perhaps the shout out should have been for “Audax Italiano”

We’ll end this week’s posts with the following: sports blog Deadspin linked to an undated video (5-7 years ago, maybe) of a stage riot during a concert by Chilean rock group Machuca. As the concert drew to a close lead singer Giancarlo Canessa gave a shout out to soccer club Universidad de Chile which led to a mad stage rush by irate fans of rivals Thankfully the concert ended peacefully and we know very well that most fans of “el Cacique” are not that crazy.

In other soccer news several international friendlies were played earlier this week with one of the most notable being ’s loss to close rivals by a score of 2-0. Hugo Sanchez’ debut as ’s coach was disappointed via second half goals by Jimmy Conrad and Landon Donovan. (On a personal note, as a fan of the “gringos” I am thrilled that they could beat though fans of “el Tri” should find consolation that their team played relatively well. Now let’s see if Mexican goalie Oswaldo Sanchez will be punished for this bit of unsportsmanlike conduct after the second goal). 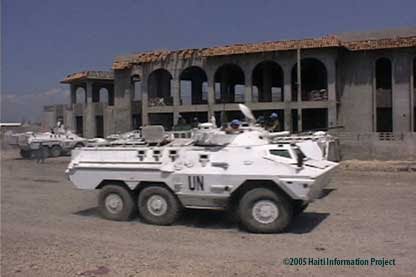 Gun fights broke out when over 500 U.N. peacekeepers rushed a massive slum outside of ’s capital earlier today. The raid in Cite Soleil may have caused at least one fatality though its aim was to curb violence by local gangs. According to a U.N. spokesman the raid in Cite Soleil was the biggest since troops were deployed there after the coup against Jean-Bertrand Aristede in 2004.

Image- haitiaction.net (2005 photo of a U.N. outpost in Cite Soleil)

Study: L. American gangs are stronger but not linked to U.S. gangs 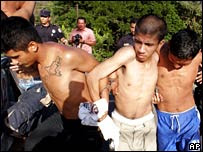 A study conducted by the Washington Office on Latin America and ’s Autonomous Technological Institute has shed some light on the topic of gang violence in the . One of the report’s findings said that the thereat of Hispanic gangs in the area is being overblown by the media and police entities. “There's been some hypersensitivity that's contributed to and exaggerated understanding of gangs,” said one of the researchers of the report which alleges that local Hispanic gangs are not connected to their Latin American counterparts.

In addition, the report concluded that Central American gangs have become stronger and better organized due to heavy-handed police tactics. So-called “zero tolerance” tactics are not producing their desired result, which casts doubts on recent transnational efforts to quell gang violence. 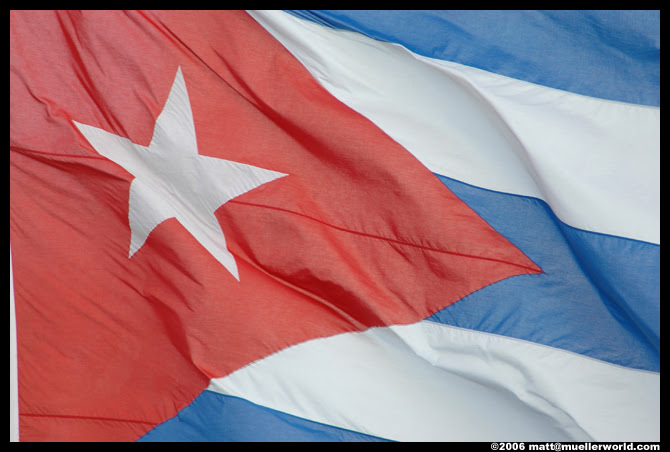 * Yesterday, ’s ambassador to said that the health of aging ex-dictator Fidel Castro is “improving progressively” inasmuch as the Cuban government has kept Castro’s health secret.

* An AP/IPSOS poll released on Wednesday showed that most people in the U.S. would like to re-establish diplomatic ties with Cuba once Fidel Castro dies, though slightly over 1 in 4 respondents admitted to not knowing enough on Castro to form an opinion.

* A former schoolteacher from was named by The Episcopal Church as its first female bishop in a developing country and she has vowed not to emulate her male predecessors.

*The Cuban government has warned against the illegal use of satellite dishes especially to pick up foreign television channels like U.S.-funded TV Marti.

Nicaraguan man to be deported from Canada due to doubts over his homosexuality, while gay couples gain rights in Colombia

A Nicaraguan man claiming asylum in due to his homosexuality had his case denied since he was allegedly deemed as not sufficiently gay. “I'm afraid to go back (to ),” said Alvaro Orozco who may be deported next Tuesday unless a federal court can stop it.

Meanwhile, ’s ruled earlier this week that homosexual couples that have stayed together for at least 2 years have the same property rights as heterosexual couples. Though leading Colombian gay rights activist Marcela Sanchez called the ruling “a great step”, the country’s Catholic Church deemed the measure as “going against the family and matrimony.”

* This makes lots of sense- the Jamaican government is trying to give a boost to its floundering sugar industry by using funds from an oil deal with .

* Over 300 families fled from a shantytown on the outskirts of after their makeshift houses burned to the ground.

* In Davis Cup tennis, is hoping to score an upset in over this weekend.

* A kidnapped Colombian army captain who had been presumed to be dead was found chained to a tree yesterday.

* ’s government wants the to extradite ex-president Alvaro Fujimori’s younger brother back to .

According to ’s People’s Daily Online, Guatemalan indigenous leader and 1992 Nobel Peace Prize recipient Rigoberta Menchu told local media that she will run for president. Menchu will speak with leaders from the Encounter for Guatemala Party tomorrow though she is willing to consider proposals from any political party (as we mentioned last week). 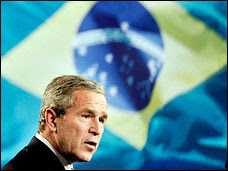 President George W. Bush will visit five Latin American nations next month- , , , , and . Bush’s trip to announced yesterday by their government- will be his first since Felipe Calderon was inaugurated last year. According to White House spokesman Tony Snow, Bush will cover a myriad of topics during his sojourn south of the border such as the “war on drugs” and immigration.

Note: Apologies for the late posting today; we were delayed by a few hours due to Blogger updates.

* The Bush administration will ask Congress to give $3.9 billion in anti-drug aid to .

Miller Brewing Company will present a new type of beer into the southwestern modeled after a popular type of Mexican beer called “chelada”. The new beer is designed to be “a modern American take on a Mexican classic” according to a Miller spokesman whose company recently began importing popular South American beers (e.g. ’s Aguila and ’s Cristal) into several cities. (Thanks Miller, but I would much rather stick with this and this as my choice of Latin American beers).

Argentine President Nestor Kirchner defended a shakeup at the country’s statistics agency which may lead to drastic changes for ’s inflation rates. “Analysts and economists that have criticized the data are being paid by other political interests” said Kirchner as his administration struggles to control a rise in inflation which has grown into the double digits. 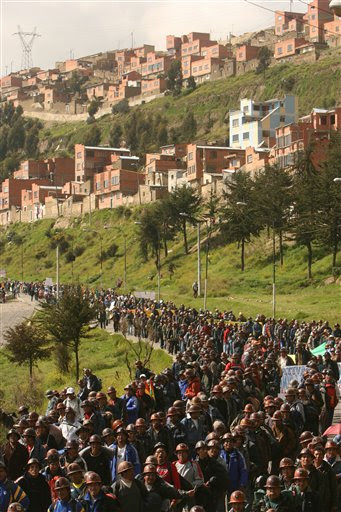 Over 20,000 Bolivian miners marched into the capital of on Tuesday (image) to demonstrate against a proposed increase in mining taxes. Though the government has tried to assure miners that the planned tax hike would only affect large private firms, miners’ cooperatives still worry that they will be adversely affected. 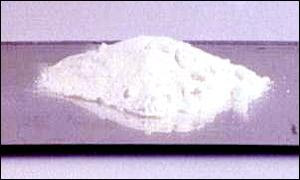 ’s government sternly criticized the Bush administration’s plan to decrease counter narcotics aid to by 40% over the next 2 years. “There are principles of joint responsibility and fairness, and under those principles the must respond to the efforts has made,” said ’s Foreign Minister in reaction to a move that will most likely be seen as retaliation against left-wing populist leaders.

In the meantime, one of the Bush administration’s closest allies in the “war on drugs”- Colombian president Alvaro Uribe- traveled to New York yesterday in order to raise support for his own counter narcotics plan.

Update: Ecuador's government plans to file a lawsuit at the International Court of Justice against Colombia's aerial fumigation of crops along its border with Ecuador. (Links via Reuters AlertNet and The Latin Americanist)

* The former Jamaican estate of James Bond novelist Ian Fleming (image) will be converted into a luxury retreat for tourists.
* The government of the is being sued by two investment firms from the and France over electricity revenues.

* Brazilian authorities suspended a senior police official accused of moonlighting as a member of a paramilitary group.

* Officials from the and four Central American countries agreed to unite in an effort to combat rising gang violence.

* Follow-up: ex-Brazilian beauty queen Taiza Thomsen contacted Brazilian police from London to assure them that she was not kidnapped as feared but instead is living there and did not wish to be bothered.

Hugo Chavez has recently taken up the charge in favor of environmental causes such as conservation of natural resources inasmuch as is one of the top oil exporters to the “We want to give an example and be at the vanguard,” said Chavez last week, though taking such a position is a double-edged sword according to Nikolas Kozloff at venezuelanalysis.com.

Business was very good for the Chilean wine industry in 2006 as exports jumped by almost 10% even though sales were somewhat hurt by a weak U.S. dollar. Yet that has not hampered plans of a possible expansion into the market where Chilean wines- famed for being inexpensive yet delicious- account for only 2%.

The title of this post was inspired by this infamous clip of a botched wine advert from the 1980s.

Cubans and Guantanamo Bay- hear no evil, see no evil, speak no evil

Cubans that live around the U.S. Naval base at are oblivious to what goes on there, according to Reuters. “Things are so quiet in that we didn't even realize the Americans had brought Talibans to the base,” said one Cuban over the controversial base which imprisons hundreds of terrorism suspects.

* Could global warming endanger Brazilian coffee? One study claims that is possible.

* Yet another editorial making the all too common mistake of equating the Latin American left with the Chavez-Morales axis.

* 32 Colombian miners were killed due to an explosion this weekend.

* Here’s an interesting stat- exports from South Florida to have tripled since 2003.

* Police in arrested a suspect in the 1999 assassination of an Ecuadorian presidential candidate.

Guatemalan political asylum seekers in danger of being deported 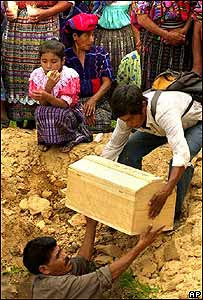 Immigration activists estimate that up to 250,000 Guatemalans who escaped their country’s civil war in the 1990s and sought asylum in the will be deported back to their homelands. The Guatemalans’ asylum cases should have been decided shortly after that country's civil war ended in 1996 but that was prevented by an enormous backlog of asylum cases at the offices of the U.S. Citizenship and Immigration Services. In the meantime, asylum seekers that have established themselves in the for as long as 20 years are scared of possible reprisals if they are deported back to .

Falkland Islands prepare for silver anniversary of its “invasion”

With the 25th anniversary of the Falklands War coming up next month, British security forces on the are getting ready for any actions taken by Argentines. “The Argentine government is very different from the one in 1982 but is pressing its sovereignty claim and has reduced co-operation,” said governor Alan Huckle on recent rhetoric from the Kirchner administration.

The Colombian public’s ire has grown with the government-led demobilization strategy of the country’s largest right-wing paramilitary group (image). The latest incident that has shaken the country was the assassination of an activist representing victims of paramilitary violence; a killing that has brought condemnation from human rights organizations. Though President Alvaro Uribe has vowed to crack down on newly-formed paramilitary groups, ’s political and military elite are worried that they will be implicated by confessions former senior paramilitary members. 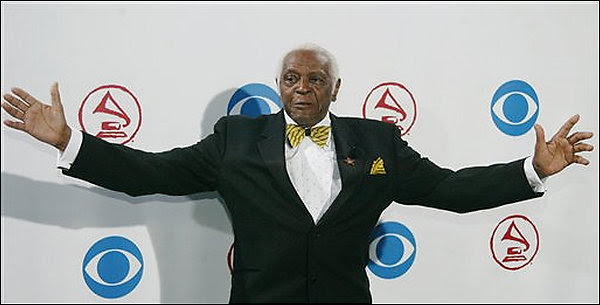 * Rest in peace Pedro Knight (image, from 2003)- salsero and widower of Celia Cruz- who passed away on Saturday at the age of 85 years.

* President Nestor Kirchner and his wife are ’s version of the ? Oh really?

* Peruvian President Alan Garcia’s promises to cut “bureaucratic fat” are coming true as he called for the reduction of 82 social programs.

* ’s government introduced a strategy to promote tourism that will place special focus on indigenous communities.

* The suspended from an active duty a Paraguayan Roman Catholic bishop who is the leading candidate for the country’s presidency.

* An earthquake measuring 6.1 on the Richter scale hit the yesterday but without reports of injuries or damage.