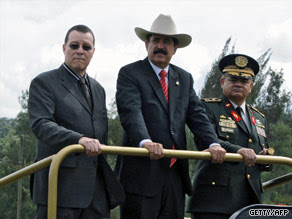 The Google Alert that said Honduras' top military brass (including armed forces commander Gen. Romeo Vasquez Velasquez) were charged with abuse of power seemed really interesting when it arrived in my inbox this morning. The nation's chief prosecutor issued arrest warrants for six top military officials who were involved in removing deposed president Mel Zelaya from power and shuttling him off to Costa Rica.

Then I went to one of the major Honduran newspapers, El Heraldo, and saw they weren't covering the story at all. Bias is a big part of that, but it's also important to note that the Supreme Court has to approve the charges before any action is taken against the generals. That's the same Supreme Court that ruled to remove Zelaya from power and told Congress Zelaya could only be reinstated if he first stood trial for charges pending against him.

Holding your breath until they get formally indicted is not recommended.

Six officers were on board the helicopter, however only three survived.

An editorial in the Havana Times has put out a scathing review of Obama's progress (or lack of) in Latin America. While the President began his term making lofty promises of strengthening US/Latin America relationships, the article, Inertia on US-Latin American Relations, sites the following shortcomings as direct proof that the administration has made its southern neighbors a very low priority.

1) Honduras
Obama- and for that matter members of OAS- failed to ensure that ousted President Zelaya first be reinstated before recognizing the legitimacy of the November presidential elections. Threats were made by the U.S. and member Latin countries, but in the end, the elections came and went without Zelaya's return to office.

2) Colombian Accord
While none were probably more disgruntled than Venezuela, South American countries stated their disappointment in the announcement that the U.S. and Colombia had reached a ten year agreement to put U.S. military bases on Colombian soil. As one analyst from the Woodrow Wilson International Center said, this had more to do with the "inadequate process of consultation and vetting with regional allies."

3) Cuba
Of greater concern to the author is the slow progress of U.S/Cuban relations. The administration has shown some signs of movement in the right direction (notably, allowing Cuban Americans to visit their homeland and restoring mail service to Cuba) but cites the continuing embargo as sign a preserved Cold War mentality.

While this blogger agrees progress has been slow, I disagree with the implication that little has changed since the Bush years. The Cold War style politics that dominated US/Cuban relations for approximately 40 years endured several administrations and Obama has taken a variety of steps in the past year to begin to thaw a strained relationship that remained frozen for decades. Furthermore, Cuba has to take some responsibility for the pace of change in relations between the two countries; Raul Castro is proceeding as cautiously as his U.S. counterpart.

4) The War on Drugs
While the US continues to provide extensive aid to Colombia to fight the war on drugs, aid now also reaches Mexico and the Caribbean in large amounts. However, the author wonders when the focus will shift to also include thorough demand-side reform to help curtail the problem at the source (i.e. the U.S). Meanwhile, death tolls continue to rise in Mexico while the country remains embroiled in violent drug-related crime.

Do you think Obama has done enough in his first year? Or do you, like the Havana Times author, wonder if the administration will continue to disappoint the way previous ones have?
Posted by Betty W. at 11:34 AM 4 comments: 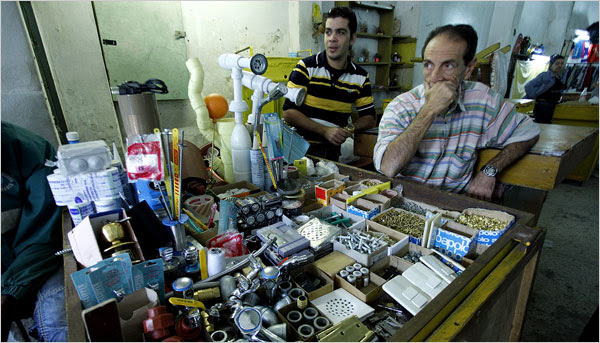 With the economy in such dire straits, Cubans have found other means of income besides their rations. Much like Craigslist, Cubans have created their own version called Revolico (www.revolico.com). According to the New York Times, the cite was created by two 20 year old Cuban men who immigrated to Spain.

The creators, (who's names have been witheld to protect their relatives who still live on the island from Cuban authorities) continue to try and evade government censors.

Although Craigslist was indeed the inspiration for Revolico, the creators say Revolico is designed to upload more quickly on the island’s slower connection speeds.

Some of the categories on the site — cars for sale, computers for sale, boys seeking girls, boys seeking boys, for instance — are identical to those on Craigslist, however there are many exchanges that are particular to Cuban culture. These examples include people who are selling their place in the visa line at the Spanish Embassy to someone trying to leave the island. One category even specializes in arranged marriages that are offered to help Cubans find a way to another country.

The new exchange cite reveals a lot about the lives of Cubans and their efforts to survive under such tight contstraints.

Looking to marry a Cuban? Got a TV you want to sell in Havana?

Check out Revolico.com (Spanish for Commotion)

The Times story mentions that one revolico buyer found a copy of Windows 7 for $5 (including setup!). Could it be that Cuba is Mac territory?

Former Peruvian President Fujimori will face jail time for the deaths of 25 people between 1990-2000, reports the SF Chronicle. The former president was challenging this sentence and continues to challenge several others.

However, his daughter Keiko vows to release her father if she wins the 2011 presidential race in Peru. How many years Fujimori actually spends in prison will depend on the success of his daughters campaign.
Posted by Betty W. at 12:13 PM 2 comments:

While some people are basking in the glory of a winter wonderland, our Latin neighbors to the south are still recovering from heavy rain storms that left dozens dead in Brazil. CNN reports that at least 41 people were killed (while other sources cite over 60) when the downpour led to severe mudslides several hours from Rio.

A part of the mountain collapsed into an upscale resort in Angra dos Reis, but perhaps more tragically, some makeshift homes in the poor suburbs of Rio collapsed, leaving at least 350 people homeless. Surely this already poor population will struggle not only to deal with the loss of life, but also struggle to rebuild.