Today’s Video: Under the surface

It was initially thought that the 33 Chilean miners trapped deep below ground since August 5th would be freed sometime in December. Yet the ringing of a bell early Saturday morning signaled that the rescue tunnel finally reached the miners. Families of the workers in Copiapo were overjoyed and hopeful that their loved ones will soon return to the surface as the following video from EFE showed:

Despite the happiness of today's achievement one of the trickiest steps will be coming up: miners will use explosives in order to widen the narrow tunnel shaft. If all goes well, the rescue operation is expected to begin early next week and could last as long as eight days.

Each miner has undergone a strict exercise and dietary regimen so that they can fit in the 24-inch wide capsule that will be lowered about 700 yards below ground.

* Argentina: Several Latin American sides played in soccer friendlies on Friday with the most notable result being Japan's suprising 1-0 win over Argentina.

* Caribbean: Puerto Rico, the Dominican Republic, and other parts of the Caribbean are on high alert due to Hurricane Otto.

* Panama: President Ricardo Martinelli scrapped a controversial proposal that was not well received by some Panamanians.

* Costa Rica: No immediate reports of damage or injuries were made as a result of a 5.9-magnitude earthquake that shook Costa Rica last night. 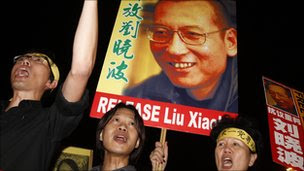 * Hungary: At least seven people are dead after 184 million gallons of toxic sludge swept through several villages and reached the Danube River.

* Middle East: The Arab League gave its conditional support of stalled peace negotiations between leaders of the Palestinian Authority and Israel.

* Congo: The International Criminal Court will resume its trial against a Congolese militia leader accused of recruiting child soldiers.

* Mexico: In an interview with the AP, President Felipe Calderon blasted a California ballot initiative to decriminalize small amounts of marijuana and also tried to deflect blame from the failures of the government’s antidrug offensive.

* Chile: Saturday could be the day when 33 Chilean miners trapped underground for over two months may be safely rescued.

* Honduras: Could Honduras become the next Latin American country to change the national constitution?

* Peru: A woman will for the first time be the next mayor of Lima though it remains to be seen if it will be Susana Villaran or Lourdes Flores.

Today’s Video: The duality of Colbert

There are occasions when Stephen Colbert emphasizes his quasi-conservative shtick like his appearance at the 2006 White House Correspondents Dinner or when he gave testimony at a Congressional hearing two weeks ago. Yet there are also times when his commentary can be thought-provoking and profound such as his explanation of why he defended migrant rights during the aforementioned hearing.

These two sides of Colbert's persona were manifested on Tuesday's episode of "The Colbert Report". The first part of the feature discusses violence against Mexican journalists though not without some jokes and quips. Starting at the 3:00 minute mark, however, Colbert takes on a more serious tone while interviewing NPR correspondent John Burnett. While some of his remarks are still humorous Colbert helps to bring out Burnett's expertise on threats against the media and how the drug trade could be changed. It's a very revealing and informed exchange that is well worth watching: One of Latin America's most renown authors can now add the world's highest accolade in literature to his list of accomplishments.

This morning, Peru's Mario Vargas Llosa was announced as the winner of the 2010 Nobel Prize in Literature. According to the Nobel Prize's website the journalist, essayist, and playwright received such a prestigious accolade "for his cartography of structures of power and his trenchant images of the individual's resistance, revolt, and defeat".

Vargas Llosa's win may be seen as an upset to oddsmakers such as
Ladbrokes who placed him as a dark horse choice at 25-1. Bookies aside, however, Vargas Llosa is a worthy winner and a true "all around man of letters" as Bookslut columnist Jesse Tangen-Mills described him. Indeed, he has written over thirty novels, plays and essays and was awarded the Cervantes Prize in 1995.

The Arequipa-born wordsmith thus joins the likes of Octavio Paz and Pablo Neruda to become the sixth Latin American to win the award though the first South American since Gabriel Garcia Marquez way back in 1982. As the L Magazine wrote on Tuesday:

Consensus is that poets, South Americans and Scandinavians have been underrepresented in the selections of recent years (though not as much as black Africans); safe picks for geographical distribution would probably include the perpetual candidates Llosa and (Mexico's Carlos) Fuentes, Swedish poet Tomas Tranströmer and Syrian poet Adonis 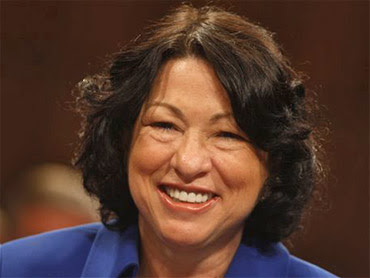 * Puerto Rico: FBI agents arrested nearly 130 people including about 90 cops as part of an investigation into alleged corruption within the Puerto Rican police.

* Latin America: The International Monetary Fund claimed that Latin America and the Caribbean are recuperating from the global economic slowdown faster than originally prognosticated.

* Cuba: President Raul Castro claimed that the U.S. has ignored at least three offers since 2001 for "bilateral cooperation to fight against terrorism."

* World: The 2010 Nobel Prize in Chemistry was given to three scientists in recognition of their groundbreaking work on carbon atom binding.

* Afghanistan: Afghani offices denied reports suggesting that the government has engaged in “high-level talks” with the Taliban.

* Indonesia: At least 64 people died and an estimated 3000 were displaced as a result of flash flooding and hard rainfall.


* Bolivia: President Evo Morales lost his cool at a friendly soccer match and gave new meaning to the idea of politicians “hitting below the belt”.

* Canada: Have “anti-terrorism laws” unfairly stacked the odds against a Salvadoran man living in Canada since 1996 and seeking refugee status?

* Cuba: According to reports State Department officials are working to repatriate most former Cuban political prisoners from Spain to the U.S.

Is the media as a whole or in part biased? Have certain press outlets have so much power that they can sway elections and popular opinion? Has journalism been subverted by the influence specific media conglomerates have? Can the press be trusted at all?

These questions (and many others) were raised in a 1993 British documentary entitled "Beyond Citizen Kane." The film focuses on Brazil's Rede Globo and how founder Roberto Marinho constructed a regional media empire. The documentary, which so far yet to air on TV in Brazil, examined how the late Marinho amassed power by allying with the country's military dictatorship and implied that biased reporting on TV Globo was decisive in the 1989 presidential election.

Bootleg copies of the film can be found online in Portuguese with some English subtitles. Here is a portion of a very revealing documentary: 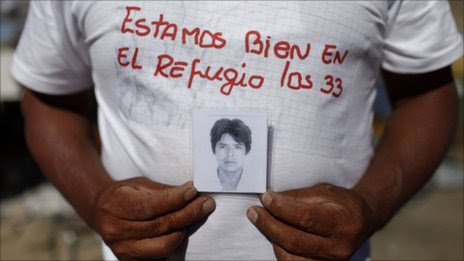 * Chile: President Sebastian Pinera expressed his hope that 33 miners trapped underground since early August could be freed before the end of next week.

* Colombia: The country’s inspector general barred two former intelligence chiefs from nearly two decades of public office due to their roles in an illegal wiretap scandal.

* Haiti: Some Canadian politicos alleged that the government staged a “photo op” by rerouting a post-earthquake flight with 24 Haitian orphans.

Image – BBC News (“Alberto Segovia, outside the San Jose mine in Copiapo, Chile, shows a portrait of his brother Dario Segovia, 48, one of 33 miners trapped inside.”)
Online Sources- CBC, AP, The Latin Americanist, MSNBC, Voice of America
Posted by Erwin C. at 8:00 AM No comments:

The country's recent rebellions were partly blamed on a new law ending promotion bonuses for police officers and soldiers. It also means no more gifts at Christmastime.

The law was passed yesterday and officially expected to start today.

In the country over the weekend, soldiers patrolled the streets in armored vehicles, the wire reported.

"Everything seems to be returning to normal," police spokesman Richard Ramirez told Reuters.

Are you in the country? Tell your experiences in the comments below.

Latin America is drawing a lot of new business these days.

Privalia, an online sales club, plans to funnel as much as $95 million into new markets in Latin America, Venture Beat reported.

Privalia already operates in Italy, Mexico, Brazil and Spain but may expand to Argentina to Colombia with their increased funds.

Hilton Worldwide already has its eye on the region, too, reports Hotel News Now.

“There are millions of Brazilians moving from one class to another,” Middleton said. “When you think about 20 million people, that’s a huge market.”

In the midst of this economic boom for the region, Mexico is winning in the investment realm, Bloomberg reported today.

Mexico's beating the U.S. and Brazil for the first time since 2002 in stocks, bonds and currency, Bloomberg reported.

* Peru: Vladimiro Montesinos, former spy chief and aide to disgraced ex-president Alberto Fujimori, was sentenced to at least 25 years in prison over his role in a pair of massacres.

* Ecuador: The government may reconsider a controversial law that led to violent protests against President Rafael Correa last Thursday.

* Puerto Rico: Police on the island have come under fire as a result of several recent incidents where cops may have used excessive force. 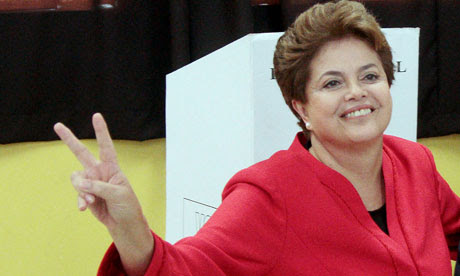 The good news for Dilma Rousseff was that she easily beat Jose Serra in today’s elections for the Brazilian presidency. The bad news for her was that she couldn’t avoid a runoff.

With about 95% of the ballots counted for Worker’s Party candidate Rousseff received just over 46% of the vote, just short of the majority she would’ve required to win the presidency. The woman selected by President Luiz Inacio Lula da Silva to succeed him will have to run against the conservative Serra in the next stage.

According to Reuters Rousseff is “favored to beat Serra in the runoff” that will take place on October 31st. Yet the deciding factor could be former environmental minister Mariana Silva who received 20% of the vote. The Green party candidate could be a “king or queen maker” said Jonathan Wheatley of the Financial Times’ beyondbrics blog who also wrote:

Of the three leading candidates, (Silva) was the only one to use TV debates to promote reform of Brazil’s bloated pensions system, for example. Already this evening, leaders of Serra’s PSDB have been calling on her to secure her support.

It could be a bruising second round, with more surprises on store.

Aside from the presidency Brazilian voters also went to the ballots to choose thousands of local and legislative representatives. Clown-turned-comedian Francisco Everardo Oliveira Silva “Tiririca” received over 1.1 million votes and easily won his bid for the Chamber of Deputies. (Whether he will be legally allowed to take his seat is another issue, however).