For the past several weeks numerous public protests representing a variety of causes have taken place in Chile. This week alone, for instance, at least twenty students have gone on a hunger strike in order to seek reforms and improvements in the education system.

Among those who also protested in recent days are survivors of a deadly February 2010 earthquake and tidal wave. As we mentioned earlier this year, some residents in the affected Maule and Bio-Bio areas were disappointed at the perceived lack of government assistance and the slow pace of reconstruction.

The dissatisfaction came to a head in the town of Dichato that was nearly wiped out due to last year's tremor. As seen in the following video from a local TV network violence erupted between police and demonstrators several nights ago:

Negotiations between local officials and residents of Dichato are expected to continue this afternoon. In the meantime, clashes between authorities and protesters keep taking place in parts of Dichato.

* Venezuela: The OPEC Annual Statistical Bulletin found that Venezuela has surpassed Saudi Arabia as the country with the highest proven oil reserves.

* Caribbean: According to a pair of cables released by WikiLeaks the U.S. and Haiti’s interim government were engaged in a diplomatic quarrel in 2006 while U.S. diplomats were aware of corruption allegations in the Dominican Republic’s top court.

* Nicaragua: President Daniel Ortega raised the possibility of a referendum to decide if Nicaragua should revive a multibillion-dollar claim against the U.S.

* Mexico: The World Trade Organization ruled in favor of Mexico over the U.S. as part of a two-decade long trade dispute over the safety of Mexican tuna.

A series of U.S. Department of Homeland Security ads aimed at preventing human trafficking will soon be airing domestically according to a CNN.com article. Viewers in parts of the U.S. will soon be able to see the same ads for the "Don't Be Fooled" campaign that have already aired in Central America and Mexico.

"We want to involve the American public in ending this abomination," said David Aguilar, deputy administrator of Customs and Border Protection, regarding human trafficking. Hence, the ads will air in states that are key immigrant destinations (e.g. Florida, Georgia, and Washington) where the issue of trafficking may not be as well known in comparison to border states.

Will the ads be as memorable as some federally-funded counternarcotics commercials like in the "This is Your Brain on Drugs" series of the 1990s? Or will the DHS series be ineffective like federally-funded anti-drug commercials (according to a 2006 Government Accountability Office report)? Check it out for yourself:

* Peru: Investors seem to have overcome their initial panic over the election of Ollanta Humala and the stock market has rebounded over the past several weeks.

* Ecuador: The directors and former opinion editor of El Universo newspaper were sentenced to three years in jail after losing a libel lawsuit brought up by President Rafael Correa.

* Cuba: The country’s Supreme Court is expected to hear an appeal tomorrow for convicted aid contractor Alan Gross who was sentenced to 15 years in prison for crimes against the state.

Image – The Globe and Mail (Peru’s main stock market index has been rising this week after he promised not to replace the Central Bank chief and he selected two business-friendly figures to his future Cabinet).
Online Sources- Reuters, CNN, USA TODAY
Posted by Erwin C. at 10:45 AM No comments:


* Chile: Medical examiners concluded that ex-President Salvador Allende committed suicide and was not murdered during a military coup in September 1973.

* U.S.: Congressional ratification of free trade pacts with Colombia and Panama could be further delayed until September according to the White House.

* Uruguay: Two goals from Luis Suarez lifted Uruguay over Peru and into the Copa America finals.

Video Source – YouTube via Al Jazeera English (The 37-year mystery into the death of Salvador Allende appears to have been finally solved after his corpse was exhumed and an autopsy was performed).
Online Sources- BBC News, CNN, Reuters, USA TODAY
Posted by Erwin C. at 9:15 AM No comments: 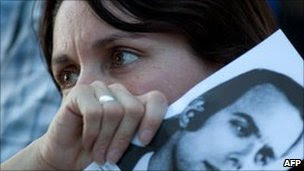 * South America: The long arm of the law recently caught up with former military members in Argentina, Peru and Colombia who are accused of human rights abuses.

* Honduras: Security has been strengthened around President Porfirio Lobo who claimed that he received death threats from disgruntled business interests.

* Brazil: “Maritime routes” are allegedly being increasingly used for arms trafficking out of Brazil.

Image – AFP via BBC News (“Thousands were killed or tortured during Argentina's Dirty War.” Last week a Buenos Aires court sentenced two ex-army officers to life imprisonment for running “one of Argentina's most notorious prisons” during the Dirty War.)
Online Sources- The Telegraph, BBC News, Politico.com, MSNBC, CSMonitor.com
Posted by Erwin C. at 9:30 AM No comments:

Preparations continue in Brazil in anticipation of the 2014 World Cup as well as the 2016 Olympics in Rio de Janeiro. Plenty of obstacles persist including projects running behind schedule and the displacement of some favela slum residents.

An important tests of Rio's preparedness for the upcoming twin global sporting events comes this week with the fifth World Military Games (WMG). The video below shows some of the pomp and splendor of the opening ceremonies that took place on Saturday at the Joao Havelange Stadium. But as noted in this article by Xinhua, there have been numerous problems at the WMG related to security and media communications. 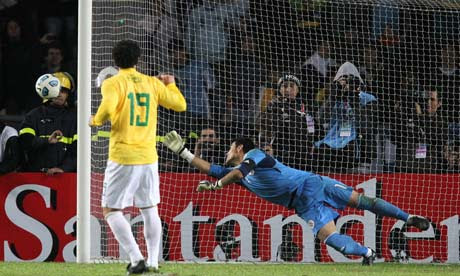 * South America: In the latest Copa America upsets Brazil missed all of their attempts in a decisive penalty shootout against Paraguay while Venezuela surprisingly eliminated Chile.

* Peru: President-elect Ollanta Humala’s approval rating has decreased in the weeks leading to his July 28 inauguration.

* Ecuador: Authorities enacted a three-day ban on alcohol after at least 21 people died from contaminated liquor.

* Chile: All but two of the 33 miners rescued from an underground mine last year have sued the Chilean government and accused the mining agency of overlooking safety regulations.

Image – Marcelo Sayao/EPA via The Guardian (“Brazil's Fred misses the deciding penalty, giving the victory to Paraguay in the Copa América quarter-final.” Brazil, Argentina, Colombia, and Chile were all surprisingly eliminated in the quarterfinal stages.)
Online Sources- Bloomberg, CNN, Reuters
Posted by Erwin C. at 10:30 AM No comments:

This Monday marks the seventeenth anniversary of the Argentine Israelite Mutual Association (AMIA) bombing in Buenos Aires, which cost the lives of 85 people and left hundreds injured. The target of the attack was a Jewish charities center located in the Argentine capital city and it's considered the worst terrorist attack in the South American country's history.

The Argentine government has blamed Iranian officials for the attack and Interpol has issued arrest warrants against several Iranian figures including Defense Minister Gen. Ahmad Vahidi. Argentina's accusations are expected to be reiterated in a report to be issued later this week while Iran has repeatedly denied the charges.

"Anita" is a 2009 movie that centers on a girl with Down Syndrome who lived a happy life with her family until the day of the AMIA bombing. The titular character becomes estranged from her loved ones and wanders around Buenos Aires where she meets several colorful characters who try to help her out. Anita evolves into a more independent and mature person while also struggling with being split from her caring family.

Below is the trailer for "Anita", a very touching movie that highlights the pain felt by Argentines as a result of the AMIA bombing: 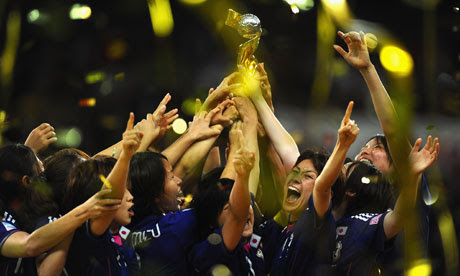 * Japan: In one of the biggest upsets in women’s soccer history a plucky and determined Japanese squad beat the U.S. to capture the Women’s World Cup.

* Egypt: Ex-president Hosni Mubarak is believed to be in stable medical condition and not in a coma as was originally rumored.

Image – Mike Hewitt/Fifa via Getty Images via The Guardian (“Japan players celebrate winning the women's World Cup after beating USA on penalties in the final.”)
Online Sources- USA TODAY, The Guardian, BBC News, The Independent
Posted by Erwin C. at 9:00 PM No comments: 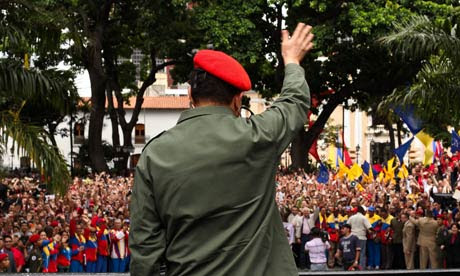 * Venezuela: President Hugo Chavez traveled to Cuba for chemotherapy treatment but not before delegating some of his powers to vice president Elias Jaua and finance minister Jorge Giordani.

* Uruguay: Former dictator Juan Maria Bordaberry died this morning while under house arrest for human rights abuses during his rule.

* Honduras: A local radio manager who was gunned down on Thursday became the twelfth Honduran journalist to be killed over the past eighteen months.

* Argentina: The Iranian government said that it would cooperate with an Argentine government probe into a 1994 Buenos Aires bombing allegedly masterminded by Iranian officials.

Image – AP via The Guardian (“Hugo Chavez has reassured the Venezuelan people that he is confident he will recover from his cancer.”)
Online Sources- Reuters, Huffington Post, BBC News, Reporters Without Borders, Buenos Aires Herald, UPI, The Guardian, Bloomberg
Posted by Erwin C. at 1:30 PM No comments: