So what are the best all-Hispanic bouts of all time?

Okay, so this is a deviation from the usual types of posts on this blog. But this is an interesting list on the best boxing bouts between Hispanic fighters ranging from recent bouts to older matches with the likes of Alexis Arguello and Roberto Duran. On Tuesday, the Bolivian government introduced a land reform program that would redistribute unused land already owned by the government. The measure seeks to calm landowners worried that fertile, privately-owned lands would be redistributed. 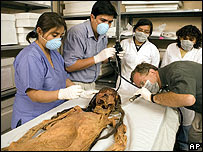 Archeologists are astonished with the finding of a 1600-year-old female mummy found in northern who may have been a ruler or warrior of the Moche tribe. The well-preserved mummy adorned with jewels and other artifacts led one scientist to compare the tomb to that of ’s King Tut.

Peru, archeology, indigenous
Posted by Erwin C. at 11:49 AM 2 comments:

DiversityInc and VivirLatino offer posts that describe the varied opinions of the media to President Bush’s immigration plan. While the Chicago Tribune and Wall Street Journal offered favorable opinions of the president’s Monday night speech, editorials in the New York Times and Christian Science Monitor lambasted the proposal which called for allowing a conditional guest-worker program while deploying 6000 National Guard troops to the U.S.-Mexico border. (Click on image to see a funny editorial cartoon on the immigration issue).

bush administration, immigration, media
Posted by Erwin C. at 11:29 AM No comments:

Menem: I shall return!

In an interview to a Chilean magazine last weekend, former Argentine president Carlos Menem vowed that he would run for the presidency next year. Menem also took advantage of the interview to take pot shots at Hugo Chavez and the Argentine media.

carlos menem, argentina, hugo chavez
Posted by Erwin C. at 11:10 AM No comments:

In the footsteps of ’s plan to nationalize their gas fields, seized an oil field from U.S.-owned Occidental Petroleum. The retaliated by cutting off free trade negotiations with . Two days ago, renewed an oil exploration contract with a Spanish-Argentine energy firm.

is preparing for the possibility of an avian flu outbreak

The International Monetary Fund praised the “remarkable improvement” of the 's economy.

Reuters examines the worry in some of the Haitian masses over the possible heavy influence of the wealthy elite on recently inaugurated president Rene Preval.

Retail sales plunged as the Puerto Rican economy tries to come back from a two-week partial government shutdown. 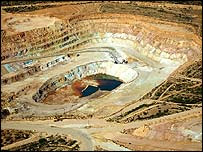 ’s copper export revenues increased by 50% over the first half of this year. This has greatly helped the country’s economy since the government has been prudent over spending, according to the Financial Times.

While media hysteria in the U.S. has revolved around a spate of deadly alligator attacks, Brazilians have been treated to an increase in media attention over mobile phone explosions. (Second link via fark.com).

“Should Africa look to Latin America?”

Afroblog! brings up the topic of discussion for BBC Africa’s program “Have Your Say,” including whether Africa needs a continent-wide political surge towards the left. One African blogger thinks that would be a step in the right direction. (The program will air on BBC’S news service at 1600 GMT this Wednesday). 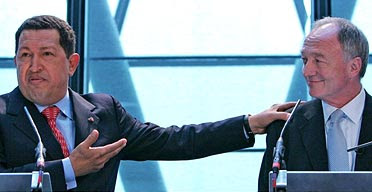 Members of ’s Conservative Party are so unhappy with the visit of Hugo Chavez that they boycotted a lunch in Chavez’ honor. One Tory legislator called London Mayor Ken Livingstone “incompetent” for his decision to dine with the controversial Venezuelan leader at City Hall.

Last week’s summit between several Latin American nations and the European Union failed to find a solution to an ongoing disagreement over ’s plans to build a paper mill close to the border with . Earlier this month, filed a lawsuit against in the International Court of Justice to prevent the construction of the paper mill that would be owned by two European companies.

Tuesday May 9: Eight latin American nations, including , were elected to the UN’s Human Rights Council. Census figures show that births, not immigration, are the main reason for Hispanic growth between mid-2004 and mid-2005.

Friday May 12: A summit in closed with several latin American states and the European Union agreeing to create closer economic ties. Oil is the main issue as ’s president prepares for a trip to .

Sunday May 14: Rene Preval inaugurated as an president.