* U.S.: The world of music is in mourning after the deaths this week of critically acclaimed singer/songwriter Etta James and “godfather of rhythm and blues” Johnny Otis.

* Italy: While the captain of the capsized Costa Concordia continues to face intense scrutiny over his role in the accident, the ship’s owners may soon face a class-action lawsuit in the U.S.

* Nigeria: At least seven people are dead in the northern city of Kano reportedly due to sectarian attacks.

* Afghanistan: France halted its military operations in Afghanistan and threatened to pull out its troops after four French soldiers were killed in combat on Friday.

* Dominican Republic: Major League pitcher Fausto Carmona was arrested by Dominican authorities who accused him of using a false identity to try to obtain a U.S. visa.

* Venezuela: According to the Venezuelan Prisons Observatory the number of prison deaths spiked last year to 560 while nearly 1500 inmates were injured due to violence in correctional facilities.
* Peru: Archeologists working on sites on Peru's northern coast concluded that people ate popcorn up to 6700 years ago, more than 2000 years earlier than thought.


* Latin America: According to a Guttmacher Institute report 95% of abortions in Latin America are considered “unsafe” and the region has one of the world’s highest abortion rates.

* Guatemala: Despite promising an "iron fist" against traffickers, recently inaugurated president Otto Perez Molina suggested that drug decriminalization should be debated "as soon as possible."

* Paraguay: President Fernando Lugo signed a decree declaring a ninety-day “food emergency” due to a drought that has affected the country for nearly two months.

Video Source – YouTube via teleSUR English (Last month the Uruguayan Senate passed a bill designed to decriminalize some forms of abortion. Most Latin American countries have laws that ban either a majority or all forms of abortion.)Online Sources – UPI, Hispanically Speaking News, InSight Crime, The Guardian


* El Salvador: President Mauricio Funes issued a formal apology for the state’s role in 1981’s El Mozote massacre, which claimed the lives of over 1000 civilians.

* Honduras: Over 150 U.S. Peace Corps volunteers left Honduras due to concerns over violence and security.

* Brazil: Police will reportedly continue to look into allegations that a contestant on the Brazilian version of "Big Brother" raped one of his housemates.

Mexican comedian Sergio Verduzco, better known as Platanito the Clown, apologized after joking about a fire that killed nearly fifty children in 2009.

“I am a clown that wants to create laughter rather than cause pain,” said Verduzco in a video statement via YouTube. He added “It was not my intention nor that of my show to hurt the memory of the children” either killed or injured as a result of the deadly Guardería ABC (ABC Nursery) blaze in Sonora state.

Despite his apparent contrition Verduzco nonetheless claimed that his TV show is for adults and that jokes shown came from his live and unedited stage show. “Making negative comments about me…will not solve the nation’s problems,” said Verduzco in response to the fierce backlash against his insensitive humor.

The controversy emerged after a video clip of was posted on YouTube from one of his stage performances. (Translated text below):

“Do you know why Michael Jackson died? Out of desperation because they torched a nursery up in Sonora…Besides, now there is no nursery. They opened a joint called ‘Kentucky Fried Children’”.

Verduzco has faced a mountain of criticisms since the video was posted on Monday. “As a father it made me cry,” said Julio César Márquez, head of a group representing victims’ families. Twitter users using the #FueraDelAirePlatanitoShow called on people to boycott Platanito’s stage show and TV program. Sonora governor Guillermo Padrés Elías said that he would do “whatever is at my reach so that (TV network) Televisa can feel our indignation.”

The June 2009 Guarderia ABC fire killed forty-nine children and left over one hundred injured. A subsequent investigation concluded that numerous safety faults led to such a high death toll including “poor infrastructure of the daycare…and a lack of employees to carry out an appropriate emergency response.” 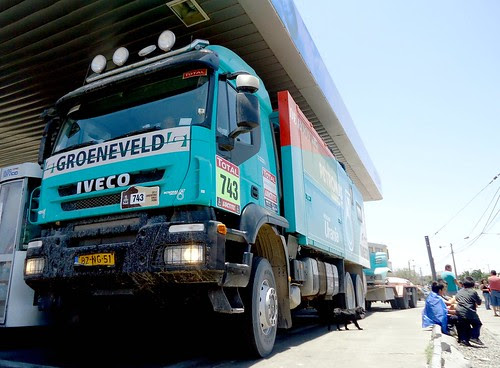 * South America: Frenchmen Stephane Peterhansel and Cyril Depres won in the car and motorcycle categories, respectively, of the Dakar Rally that wound through Argentina, Chile and Peru.

* Argentina: A federal judge opened an investigation into possible human rights abuses committed in Spain during the 20th-century dictatorship of Francisco Franco.

* Cuba: The family of imprisoned Cuban dissident Wilman Villar reportedly said that he “is in a coma and dying with pneumonia, and breathing only with a machine.”

* Venezuela: Oil minister Rafael Ramirez said that Venezuela will opt out of settling disputes with the World Bank’s international arbitration body days after the panel ordered Venezuela to pay $255 million to Exxon Mobil.

* Venezuela: The foreign ministry confirmed the closing of the Venezuelan consulate in Miami days after the U.S. expelled the office’s consul general due to allegations of a “possible cyber-attack”.

* U.S.: Daimler AG issued an apology over the use of an image of Ernesto “Che” Guevara to promote Mercedes-Benz autos.