This summer’s elections in Mexico will be historic in more ways than one: ex-patriates in the United States will be allowed to vote by proxy in their home country’s elections for the first time, and Mexicans will have the chance to see if they have fully unlocked presidential politics from the political machine that the PRI once was. Outgoing president Vicente Fox has been influential on both counts, and he may be making important moves behind the scenes that will notably affect the outcome of this summer’s elections.
Fox first made it clear that he would remain a powerful force in politics until his last day in office when he attempted to prosecute the Mexico City mayor and left-wing presidential candidate Andres Manuel Lopez Obrador for a minor land dispute in which Obrador sought to construct a hospital on private land. The incident backfired, and the charges were retracted amid popular protest. The prosecution arguably added to Obrador’s popularity, as the majority of the capital’s voters sided with his argument in the dispute.
Obrador is now free from prosecution and is a promising candidate in the presidential race, and Fox appears to be changing his tactics to ensure that a presidential victory does not fall into the hands of the left. His government surprisingly authorized Zapatista leader Subcomandante Marcos to conduct a six-month tour of the nation, a sharp departure from the close eye the Mexican army has kept on the Zapatistas in the southern state of Chiapas. Marcos stated the purpose of the tour was to “forge alliances with leftist groups that are not taking part in the elections, campesinos, indigenous people, and other sectors, in order to hash out a new blueprint for the country ‘from the grassroots up’”, according to IPS News Service.
The Zapatista National Liberation Army (EZLN) has spent much of its tour trying to convince voters that Obrador will offer more of the same, and that his candidacy does not represent the values of the true left. Though Marcos has criticized all the presidential candidates (in addition to harrassing the first lady) his tour will most likely succeed in persuading some voters on the left to reconsider their support for Lopez Obrador. Given that the Fox administration didn’t permit the Zapatista tour for entertainment purposes, this may be exactly what they had in mind. 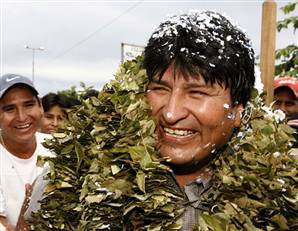 Brazilians watched Evo Morales' ascent to power in Bolivia carefully, hanging on to every word he uttered regarding the re-nationalization of the country's oil fields and the economic 'decolonization' of Bolivia. As Bolivia supplies half of Brazil's natural gas, Brazilian wonks fret that Morales will now be tempted to turn the taps off. Newsweek explores the dynamics between Bolivia's president-elect and his neighbors, and how the situation may progress. (Newsweek)