March 30th was César Chávez Day, a holiday observed in several U.S. states in honor of the late labor and civil rights activist. Over 120 schoolchildren in El Paso, Texas participated in a march to remember the man who would've celebrated his 85th birthday on Friday, while more than 500 Chico State University students took part in several community service projects.

In the meantime, work continues on a biopic of Chávez that will be directed by Diego Luna and will feature Micheal Peña, America Ferrera and Rosario Dawson.

Why is Chávez so revered that several activists and politicians (including a then-Sen. Barack Obama back in 2008) support making César Chávez Day a federal holiday? Some insight into Chávez's life can be seen in the following documentary video clip from the early 1970s focusing on grape farm workers seeking better conditions:


* Latin America: A new album of Selena will be released on Tuesday while fans of the late “Queen of Tejano” music recall the singer who was tragically murdered on March 31, 1995.

* Chile: The U.N.’s human rights office called on Chilean officials to pass new anti-discrimination laws in the aftermath of the attack and death of homosexual teen Daniel Zamudio.

* Argentina: Prosecutors claimed that ex-president Carlos Menem should stand trial over the 1994 bombing of a Buenos Aires Jewish center that killed 85 people.

Today’s Video: On a Wing and a Prayer

We'll be back over the weekend to look at several news and notes from around the Americas.

In the meantime think about the following: is Ciudad Juarez, Mexico the "most dangerous city in the hemisphere, if not the world"? This was the assertion made yesterday by William Brownfield, the U.S. Assistant Secretary of State for the Bureau of International Narcotics and Law Enforcement Affairs.

The former ambassador's remarks came on the same day as a Juarez police spokesman confirmed that five officers were shot and killed on Wednesday night. But Anthony Wayne, the U.S. diplomatic envoy to Juarez, observed that the number of homicides in the city have decreased significantly since 2010.

If Brownfield does take up Murguía on his offer then perhaps he can visit a group of young Juarez residents who dress up as angels in order to protest the violence in their city:


* Honduras: At least 13 people are dead after a prison fire and riot in San Pedro Sula, which occurred weeks after over 350 inmates died as a result of a massive blaze in a Comayagua prison.

* Brazil: Is a new law in Bahia state banning public funding of concerts with “offensive music” insulting women and gays necessary or censorship?

* Guatemala: An estimated 10,000 indigenous demonstrators marched into Guatemala City and urged the government to help settle a series of land disputes.

There has been widespread outrage in Chile and growing criticism worldwide over the death of a teenager who was brutally beaten possibly due to his sexual orientation.

Friends and family of Daniel Zamudio gathered at his home in a Santiago neighborhood this morning to honor the memory of the teen that died on Tuesday night. As you can see in the following video via CNN Chile, Zamudio’s family has received support from neighbors and strangers and is also seeking funds in order to pay for his funeral on Saturday: 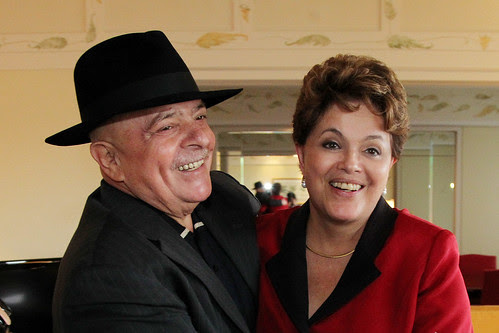 * Brazil: Former president Luiz Inacio Lula da Silva said that he will return to politics after being told by doctors that his larynx cancer is in “complete remission.”

* Venezuela: The head of the Venezuelan telecom agency is taking legal action in order to force Globovision to pay a $2.1 million fine.

* El Salvador: President Mauricio Funes rejected allegations that the government was involved in an alleged truce between the Mara Salvatruchas and Mara 18 gangs.

* U.S.: Documents from the National Organization for Marriage showed how the group tried to campaign for Latino support against gay marriage.

Today’s Video: Fidel and the Pope

Before leaving for Rome, the pontiff thanked the Cuban people for their hospitality, reiterated calls for greater religious freedom on the island and criticized the decades-long U.S. trade embargo.

After speaking in front of an estimated 300,000 in Havana's Revoultionary Square, the Pope held a private meeting with former Cuban president Fidel Castro:

Castro, who ceded the presidency to his brother Raul in 2006, reportedly asked many questions to the pontiff including "What does a Pope do?" He also allegedly expressed to Benedict his joy over the beatification of Mother Teresa and Pope John Paul II, and requested that the pontiff send him books.


During an outdoor mass held in Havana this morning Pope Benedict XVI emphasized the need for change worldwide as well greater religious freedom in Cuba.

“The right to freedom of religion, both in its private and in its public dimension, manifests the unity of the human person, who is at once a citizen and a believer,” the pope said in his homily. He added that while the Cuban government has granted greater liberties to the Catholic Church, the pontiff called on “authorities to strengthen what has already been achieved and advance along this path of genuine service to the true good of Cuban society as a whole”. 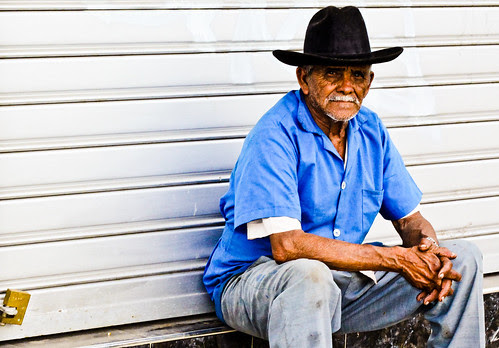 * Latin America: Latin America’s elderly population is expected to increase over the next few decades and overcome the number of children in the region by 2040 according to the U.N.

* Venezuela: A new poll showed that President Hugo Chavez has a double-digit lead over Henrique Capriles though a sizeable number of respondents remain undecided.

* U.S.: A study by the human rights group Amnesty International USA found that Latino residents in the border area near Mexico “are disproportionately affected by a range of immigration-control measures, resulting in a pattern of human rights violations.”

* Dominican Republic: Police arrested six suspected members of a local Anonymous group accused of infiltrating the websites of the government and private companies.

As seen in the video below, the earthquake provided quite a scare for fans in Santiago attending a soccer match between Colo Colo and Palestino: 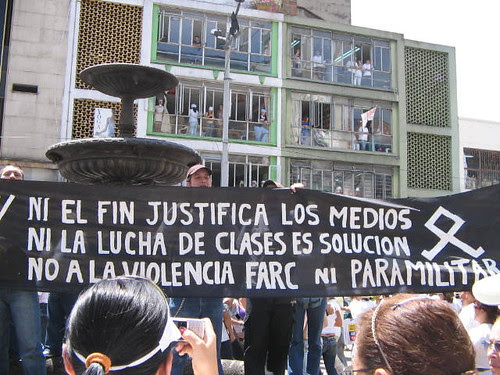 * Colombia: President Juan Manuel Santos said that thirty-six members of the FARC were killed yesterday as part of a military offensive against the guerillas.

* Guatemala: At a summit of Central American states, Guatemalan President Otto Perez urged an “end (to) the myths, the taboos” preventing a meaningful debate on drug legalization.

* Argentina: The U.S. will reportedly suspend a series of trade preferences to Argentina after deeming that the South American country’s government failed to “to pay damages owed (to) U.S. investors”.

* U.S.: A Los Angeles Police Department investigation found that one of its officers engaged in racial profiling against Latino motorists.


Pope Benedict XVI just arrived in Cuba where expectations are high as to what the Pope will say regarding politics and the role of the Church on the island.

“As people who are marginalized, the oppressed, we too have a right to at least one minute with His Holiness,” said Bertha Soler, the head of the Ladies in White dissident group. Soler also remarked that she wants to give the Pope a list of political prisoners “in case there’s a possibility of pardon” much like in the visit of Pope John Paul II to Cuba in 1998.


Pope Benedict XVI departed from Mexico minutes ago but not before speaking out against the country’s rampant violence.

“At this time when so many families are separated or forced to emigrate, when so many are suffering due to poverty, corruption, domestic violence, drug trafficking, the crisis of values and increased crime, we come to Mary in search of consolation, strength and hope," he said during an outdoor mass on Sunday.


* Ecuador: At least 4700 people have been displaced from their homes this year as a result of heavy rain causing flooding and mudslides.

* Chile: At least one fatality may have resulted after an earthquake measuring 7.1 on the Richter scale struck central Chile on Sunday night.

* Mexico: Sergio Pérez became the first Formula 1 driver from Mexico to reach the podium since 1971 after he secured a career-best second place in the Malaysian Grand Prix.