A report issued last month by Reporters Without Borders (PWB) concluded that Mexico was one of the world’s most dangerous countries for the press. The “extreme violence” related to illegal drug trafficking has had a “major impact on reporting” in Mexico according to PWB. Indeed, 2010 was a very difficult year for the Mexican press with at least seven journalists slain and one study concluded that regional newspapers altered their coverage in order to avoid retribution.

Some members of the media have been unable to put up with the pressures of constant violence and death threats against them and have sought refuge elsewhere. Such is the case with former Mexican journalist Emilio Gutierrez Soto whose asylum hearing at a U.S. federal court was scheduled for today. He sought asylum since he crossed the border in 2008, a situation that led him to be detained for seven months at a federal immigration center. Gutierrez claimed that he fled with his 15-year-old son after receiving multiple death threats over his reporting on corruption in the Mexican military.

Gutierrez will supposedly have several witnesses in his favor during his asylum hearing including members of the Committee to Protect Journalists and Center for Public Integrity. They will try to strengthen his claims that he faces a credible threat and his life would be in danger if forced to return to Mexico.

As reported in the Texas Tribune, Gutierrez’ case represents “the most difficult route taken by asylum seekers, the defensive process, defined by the government as a request “as a defense against removal from the U.S.” Nonetheless, he hopes to have the same fate as Jorge Luis Aguirre, the former editor of a Ciudad Juarez daily who received asylum last September.

Should Gutierrez receive asylum or be deported to Mexico? Is U.S. immigration policy unfairly stacked against asylum seekers? If Gutierrez wins his case could this lead to an increase in asylum seekers amongst members of the press? These are questions worth pondering while we feature the following video from National Geographic on Gutierrez and his ordeal:

* Bolivia: A report in Der Speigel claimed that the late Nazi war criminal Klaus Barbie served as a West German secret agent while hiding in Bolivia after World War II.

* Latin America: According to the International Labor Organization unemployment in Latin America and the Caribbean fell last year but did very little to alleviate poverty throughout the region.

* Colombia: Renown artist Fernando Botero announced that his newest work will open this November and will feature "without satire" the Stations of the Cross.

Image - European Jewish Press ("In the early 1970s French Nazi-hunters Beate and Serge Klarsfeld tracked Klaus Barbie down and France succeeded in extraditing him in 1983. He was sentenced to life in prison in 1987 and died in jail in 1991.")
Online Sources - Bloomberg, France24, UPI, Der Spiegel
Posted by Erwin C. at 10:30 AM No comments: 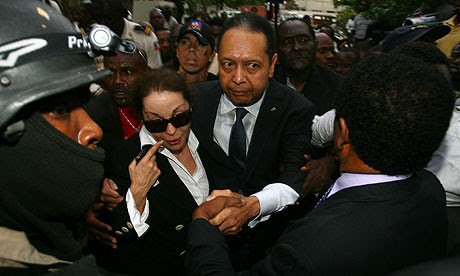 * Haiti: Does it make any sense that former tyrant Jean-Claude “Baby Doc” Duvalier was permitted to return to Haiti but authorities have thus far rejected issuing a passport to ex-president Jean-Bertrand Aristide?

* Brazil: The country’s oil fields may hold twice as much oil as initially predicted according to research by a former Petrobras geologist.

* Mexico: Police arrested a Mexican man suspected of having been involved in the January 2010 shooting of Paraguayan soccer star Salvador Cabanas.

* Ecuador: President Rafael Correa submitted a number of economic and political reforms that could be listed on a possible constitutional referendum.

At least seventy student demonstrators upset at the imposition of new student fees at the University of Puerto Rico (UPR) were arrested this morning. The protesters were detained at one of the entrances to the UPR campus in Rio Piedras, a location not designated by authorities as an official protest zone. Allegedly among those arrested due to the act of civil disobedience was student protest leader Adriana Mulero as well as the head of Puerto Rico’s teachers union.

Other civil disobedience actions have also taken place throughout the day including, as of the time of this post, sit-ins by students in the streets around the UPR. The following video from the website of Puerto Rican daily El Nuevo Dia shows some of those detained during today’s protests in San Juan:

It’s no coincidence that today’s actions come on the same day of a deadline for UPR students to pay the $800 fee or lose their enrollment. Strike leaders have allegedly advised students to only pay the first installment of the controversial fee in order to maintain enrollment or to write "Payment Under Protest" on check payments in case a class action lawsuit is filed.

Today’s protests are just the latest incidents in the opposition to Gov. Luis Fortuño’s austerity measures. The UPR network of eleven universities was paralyzed for two months last year in protests against Fortuño’s plans to impose fees that would’ve doubled tuition. As written in Global Voices, last week “hooded protesters” vandalized and intimidated students at the Rio Piedras campus.

* Mexico: Police arrested the founder of the Zetas drug gang and accused him of controlling drug and migrant smuggling routes from southern Mexico.

* Bolivia: According to reports the U.S. will formally object to Bolivian plans to end the global ban on coca leaf chewing.

* Chile: An agreement was reached to end protests over a planned 17% gas price hike in Chile’s southernmost region.

* Cuba: Work is set to begin on the laying of undersea fiber optic cable between Venezuela and Cuba, thus circumventing U.S. sanctions on the island.

Update:
Haitian authorities have formally charged ex-strongman Jean-Claude “Baby Doc” Duvalier with several charges including corruption, theft, and the misappropriation of funds. The charges, which stem from Duvalier's abusive rule between 1971 and 1986, will be looked into by an "investigative judge" who could give the go-ahead to a judicial case.
Original Post:
Haitian police detained former Haitian tyrant Jean-Claude “Baby Doc” Duvalier less than 48 hours after his surprise return to his homeland.

After being warmly greeted by a small crowd of sycophants on Sunday, Duvalier could be formally charged with ransacking the national treasury during his rule between 1971 and 1986. Duvalier had met with Haiti’s top prosecutor and a judge before being escorted this morning from the Port-au-Prince hotel where he was residing to government offices for questioning.

Several human rights groups and Haitian expats living abroad called for the arrest of “Baby Doc” after he returned from his 25-year exile in France. "Duvalier's return to Haiti should be for one purpose only: to face justice," said Jose Miguel Vivanco, Americas director of Human Rights Watch, in a statement. “I don't know what will be the outcome but this is a plot to get everybody confused,” said playwright Jan Mapou to the Miami Herald. (He was jailed under the Duvalier regime for hosting a Creole-language radio program.)

So why did Duvalier, whose rule was marked by brutality from the secret Tonton Macoute police and widespread corruption, return to Haiti? As reported in CNN, “a Duvalier associate” said that he came back since he was “deeply hurt in his soul after (last year’s) earthquake.” However, Duvalier may look to take advantage of a country in political chaos partly due to allegedly fraudulent presidential elections. (It may be no coincidence that on the same day Duvalier returned Haitian electoral officials postponed a disputed presidential runoff).

Duvalier may try to exploit a Haitian populace uneasy with the government’s response to the January 2010 tremor that killed 200,000 people and left millions of survivors either homeless or residing in unsafe tent camps. Hence, as the following news report from NBC News showed, “Baby Doc” could take advantage of younger Haitians who were not alive during his crushing regime but are currently living under very difficult conditions. (Skip ahead to around the 1:55 mark).

Visit msnbc.com for breaking news, world news, and news about the economy

* U.S.: The family of a Mexican boy killed by a U.S. Border Patrol agent last June has filed a multimillion-dollar wrongful death lawsuit against the U.S. government.

* Peru: An executive order issued by President Alan Garcia bans all smoking in public buildings and the workplace.

* Latin America: Execs at CONCACAF, the ruling soccer body for North America, Central America, and the Caribbean, will advocate that the region receive another automatic berth for the 2014 World Cup. 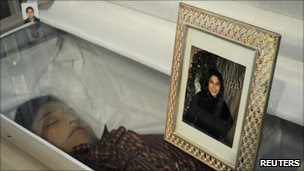 Today is Martin Luther King Jr. Day in the U.S., a day to commemorate the achievements of the renowned civil rights activist. Though his hard work helped advance the cause of civil rights globally, there are activists around the world who continue his legacy in favor of the downtrodden and disadvantaged. Susana Chavez of Mexico was one of those individuals up until her untimely death.

For many years Chavez campaigned against the unsolved murders of hundreds of women in northern Mexico. She helped create the slogan “Ni Una Mas” ("Not One More Death"), which served as a battle cry for local women’s rights activists against the string of “femicidies” since the early 1990s. She participated in an organization called May Our Daughters Return Home, which represented the families and loved ones of the female victims.

Chavez’ body was identified last week by her family after police found her corpse on January 6th. Three suspects were arrested after they reportedly confessed to mutilating and murdering Chavez. Authorities said that her death was not related to her activism but was instead the result of an "unfortunate encounter" with the three teens that strangled her after an argument. The accused allegedly cut off her hand to give the false impression that drug gangs were behind her death.

Chavez’s killing happened less than a month after the murder of Marisela Escobedo, the mother who set up shop in front of the state governor’s office to demand the arrest of the killer of her 16-year-old daughter. Escobar alone investigated the whereabouts of the perpetrator, who was eventually set free by a panel of judges, despite confessing to the crime. The judges are currently being investigated for the decision.

Chavez’ blog, Primera Tormenta, revealed her very moving and touching poetry in honor of those killed and whose murders have gone mostly in impunity. “Blood of my own, blood of sunrise, blood of a broken moon, blood of silence” has reportedly become the motto of those who wish to continue her efforts for justice for the women in Ciudad Juarez.


* Brazil: As seen in the above video from Al Jazeera English, hundreds of people in southeastern Brazil who survived massive flooding and mudslides face an uncertain future.

* Venezuela: President Hugo Chavez claimed that he would cut the period of Congressionally approved decree powers from eighteen months to possibly four.

* South America: Nasser Al-Attiyah of Qatar and Spain's Marc Coma won in the car and motorcycle categories, respectively, of the Dakar Rally that was held in Argentina and Chile.

* Peru: Ex-President Alejandro Toledo leads a crowded field of presidential hopefuls according to one recent poll.