* Egypt: Tens of thousands of demonstrators gathered in Cairo's Tahrir Square to call for a quicker transfer of power to civilian rule. (Update: Over the weekend at least four people died amid clashes between protesters and police attempting to clear Tahrir Square).

* U.S.: Will the need to move some operations indoors due to the winter have a major impact on Occupy movements across the country?

* Iran: The U.N.'s “nuclear watchdog” approved a resolution that blasted Iran’ s nuclear plans but refrained from referring the country to the U.N. Security Council.


* Venezuela: Thousands of troops under a new command known as the People's Guard will be deployed throughout the country in order to combat a spike in violent crimes.

* Haiti: Vaccinations will soon be administered in order to stop a cholera outbreak that has killed nearly 7000 people since October 2010.

* Puerto Rico: The yearly record for murders is expected to be surpassed in the next few days with the 1000th murder.

* Nicaragua: Recently reelected President Daniel Ortega will surely be seeking to take advantage of a two-thirds majority of his political party in the Nicaraguan legislature.

In the early 20th century millions of Europeans seeking better economic opportunities migrated to Argentina. This wave of migration died down and in the last few decades Argentina has become the target of visitors from Latin American countries. But could the financial crisis currently hitting Europe lead to a resurgence of immigration to Argentina from that continent?

The following Spanish-language video via Russia Today examined the recent boost in Spanish migrants traveling to Argentina. Over 24,000 Spaniards migrated to Argentina in 2010, with most of them young adults seeking jobs that they have had trouble obtaining in their homeland.

Will these new migrants from Spain have as profound an effect on Argentine culture as some of their ancestors roughly a century ago? See for yourself:


* Brazil: Ex-President Luiz Inacio Lula da Silva shaved his hair and trademark beard ahead of his next round of treatments to combat throat cancer.

* Panama: Former strongman Manuel Noriega is one step closer to being extradited to his homeland where he awaits trial.

* Mexico: A statement from the Committee to Protect Journalists expressed “deep concern” over the whereabouts of two Mexican journalists who have gone missing since Monday.

Online Sources- BBC News, MSNBC, Monsters and Critics, Committee to Protect Journalists
Posted by Erwin C. at 11:30 AM No comments: 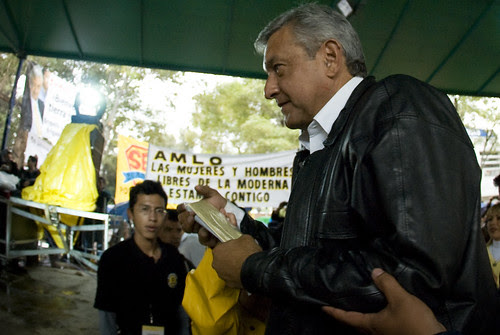 * Mexico: Andres Manuel Lopez Obrador will run again for the Mexican presidency after losing in a very close election in 2006.

* Colombia: A “hardliner” known as Timochenko was selected as the new head of the FARC guerillas nearly two weeks after alias Alfonso Cano was killed in a military operation.

* Guatemala: President Alvaro Colom gave permission for the extradition of former leader Alfonso Portillo to the U.S. where he awaits trial on supposed money laundering.


* Brazil: Police officials said that they would target other Rio de Janeiro favelas in actions similar to raids on Sunday in the Rocinha and Vidigal slums.

* Latin America: U.N. Office on Drugs and Crime chief Cesar Guedes claimed that Brazil, Argentina and Chile had become the "most important emerging drug consumer markets in the world" over the past few years.

* Mexico: The Mexican army reportedly found 140 Central American migrants stuffed in a tractor-trailer rig that was undergoing an inspection.

* Cuba: The Cuban government claimed that authorities arrested several individuals accused of setting up illegal Internet connections with alleged “financing” from the U.S.

* Venezuela: Opposition presidential candidate Maria Corina Machado blamed “criminal gangs” for a supposed attack against her during a campaign appearance over the weekend.

* Haiti: Attorneys representing thousands of Haitian cholera victims are seeking millions of dollars in compensation from the United Nations.