Regular readers may have likely noticed that there have been fewer posts published on this blog in recent weeks and especially over the past several days. I'm hoping I can pick up the pace starting on Monday (maybe Sunday) including several pieces on items I've overlooked this month.

For now, I'll leave you with the following video of a very interesting and deceiving art installation from Argentina's Leandro Erlich:

World Watch: Deal or no deal?

* Libya: A detainee swap between the government and rebels could “mark the beginning of broader talks” between the opposing sides, while the White House faces increased congressional pressure over the U.S. military role in Libya.

* China: Government critic and outspoken artist Ai Weiwei was released from prison but he also must abide by a gag order enforced by authorities.

* Rwanda: The International Criminal Tribunal for Rwanda sentenced former minister Pauline Nyiramasuhuko to life in prison due to her role in planning the mass murders of over 800,000 of her countrymen in 1994.

* Netherlands: According to Dutch researchers Type 2 diabetes can either be reversed or improved via weight loss surgery. 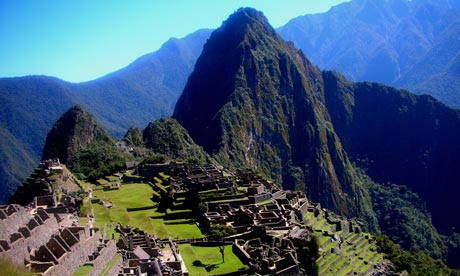 * Peru: Machu Picchu will be removed from UNESCO’s list of endangered world heritage sites though conservation programs by the U.N. will continue.

* Venezuela: President Hugo Chavez Tweeted several messages after not appearing in public for nearly two weeks while recuperating from surgery in Cuba.

* Colombia: Are female Colombian guerillas fighting as “mercenaries” against rebels in Libya?

* Brazil: At least eight people were killed during a police raid at a Rio de Janeiro favela on Wednesday night. 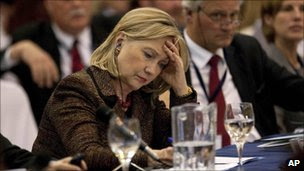 * Central America: U.S. Secretary of State Hillary Clinton pledged that her country would send $300 million in aid to combat violence in Central America.

* Venezuela: The deaths of at least nineteen inmates in riots over the past several days should call attention to the need for prison reform in Venezuela according to Amnesty International.

* South America: Peruvian president-elect Ollanta Humala claimed that he “dreams” of the reunification of his country with neighboring Bolivia.

Several days ago it was announced that Manu Chao would go on a U.S. tour starting in August and including concerts in New York, Miami and Austin. Wonderful!

* Mexico: Authorities reportedly captured the suspected head of the La Familia drug gang though it remains to be seen if it will have a major impact in a country where an estimated 40,000 Mexicans sought political asylum abroad between 2006 and 2010.

* Central America: The presidents of El Salvador and Mexico agreed to better protect the thousands of undocumented Central American migrants that travel through Mexico.

* U.S.: A pair of Cuban-American senators are not too pleased with the White House’s pick for U.S. Ambassador to Nicaragua.

* Bolivia: According to Customs officials at least 76,000 cars stolen or smuggled from countries bordering Bolivia have been presented for legalization as part of a government-backed amnesty program.

* Haiti: In what might be a sign of Haiti’s political divisions the country’s legislature rejected President Michel Martelly's nominee for prime minister. 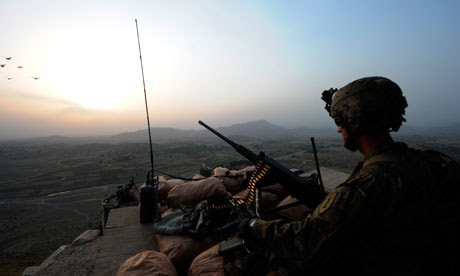 * Afghanistan: President Barack Obama will reportedly announce tomorrow that 30,000 troops will be withdrawn from Afghanistan by November 2012.

* Greece: The Greek parliament approved by a very narrow margin a vote of confidence in the government led by prime minister George Papandreou.

* Syria: The E.U. may extend sanctions against Syria while several people died during clashes between pro- and anti-government protesters.

* U.S.: In a rare unanimous vote all 100 members of the U.S. Senate backed Leon Panetta's nomination to become defense secretary at the end of this month.

Image – Ted Aljibe/AFP/Getty Images via The Guardian (“A US soldier from Viper Company (Bravo) on guard in Khost province in the east of Afghanistan on 21 June as President Barack Obama plans to withdraw troops.”)
Online Sources- CNN, Voice of America, Reuters, The Guardian
Posted by Erwin C. at 5:45 PM No comments:

1 - Oh goody, a commercial that pathetically tries to promote the annoying and cliched "Latin lover" stereotype.

2 - The world will not end in 2012 despite the paranoia over Doomsday.

3 - If you truly believe that body spray will convert you into a magnet for the fairer sex then perhaps you might be interested in buying several bottles of "Dr. Oliver's Cat-Sweat Scalp Tonic."

* Chile: A court suspended the controversial Hydroaysen project, which was backed by the government yet strongly opposed to by environmentalists and some residents of the Patagonia region.

* Panama: Former leader Manuel Noriega could soon be extradited from France to his homeland where he will serve numerous prisons sentences.

The massive plumes of ash from the erupting Puyehue volcano in Chile has caused widespread problems including delays in air travel across the Southern Cone region along with Australia and New Zealand. The gradual diminishing of volcanic activity has permitted thousands of previously evacuated Chileans to return to their homes. For some people it will take some time to return to their daily lives while their ash-laden towns are cleaned up. Other areas, such as the deserted village in Argentina featured in the following video, may be abandoned forever:

As you can see in the above clip several layers of ash are on the ground, which would hinder cleanup efforts. Animals in the area face starvation since they cannot reach the grass they usually feed while sources of potable water are few and far between. Hence, the Argentine town of Villa la Angustura could become a permanent ghost town. 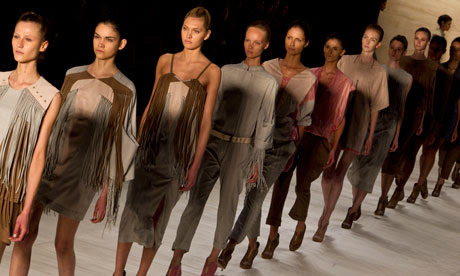 * Brazil: Protests have been held over the lack of racial diversity at Sao Paulo fashion week after fashion labels reportedly ignored a racial quota put in place since 2009 for Afro-Brazilian models.

* Cuba: Most Cubans were unable to identify several prominent dissident figures according to a 2008 survey conducted by U.S. officials and recently uncovered by WikiLeaks.

* Guatemala: Authorities arrested a former army chief who served during the infamous military government of Efrain Rios Montt and accused him of human rights abuses.

Image – Nelson Almeida/AFP/Getty Images via The Guardian (“Models at the Huis Clos show at São Paulo fashion week in Brazil.”)
Online Sources- BBC News, MiamiHerald.com, ESPN, The Guardian, The Latin Americanist
Posted by Erwin C. at 8:15 AM No comments:

A world premiere film screening will be held tonight as part of the closing of this year's Cine Fest Petrobras Brasil NY festival.

"Elza" is a new documentary focusing on Brazilian samba legend Elza Soares. Her career has spanned over fifty years and she has performed in concerts worldwide with the likes of Gilberto Gil, Caetano Veloso and Carlinhos Brown. "Elza" takes a look at the outgoing Soares and she's praised by numerous artists including Veloso and Jorge Ben Hor.

The following is the trailer to "Elza":

The film will follow with what should be a festive and rhythmic concert by contemporary samba star Mart’nália.
Doors for tonight's free event open at 6:00 PM and the film is scheduled to start at 7:00 PM.

Please go and check out this evening's very special event!