Note: Thanks to everyone who’s sent us tips over blogs that could be added onto our blogroll. We’ll be updating the list soon so please don’t hesitate to keep sending us tips at ourlatinamerica@yahoo.com.

* Remember how domestic violence may have been behind the deaths of a Salvadoran family near ? The same thing may have been a factor in the murder/suicide of a immigrant mother and three of her children.

* Reactions from the left and right over a New York Times article on the Cuban health care system. (Second link via Global Voices Online).

* From Hispanic Tips: Supermarkets in the southwestern U.S. have increasingly stocked up on Mexican Coca-Cola, which uses sugar rather than the corn syrup of its U.S. counterpart.

* A trippy-looking poster from a art gallery, via La Elbahara.

Apologies for the sporadic posting today and yesterday, folks: 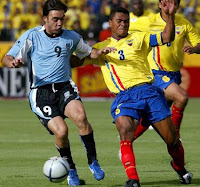 Latin American leaders are joining together against a FIFA banthat would bar games in several of the region's cities.

Bolivia's President Evo Morales is galvanizing other leaders in an effort to fight the international soccer organization's May 27 ban on matches in cities, including La Paz, more than 2,500 meters above sea level, according to a May 29 article on iAfrica.com. The ban also would exclude Bogota, Colombia and Quito, Ecuador.

Photo: smh.com.au Uruguay's Alvaro Recoba against Ecuador's Ivan Hurtado during the 2006 World Cup in Quito, Ecuador
Posted by Alison at 5:50 PM No comments:

Weekly Debate: Venezuela and the media 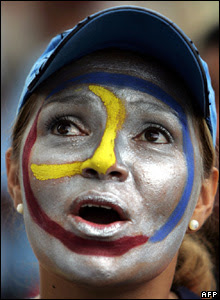 At midnight on Monday, Radio Caracas Television (RCTV) ceased operations (for all intents and purposes) after the Venezuelan government declined to renew the network’s broadcasting license. Hours after the RCTV shutdown, the government denounced CNN and Globovision for spreading “lies” and misinformation against Hugo Chavez. Venezuelans have spent days protesting for and against the measure, and anti-Chavez protesters denounced government troops that shot tear gas and rubber bullets at them.

So what do you think about Chavez' decision? Is his opposition to RCTV censorship or correct? Will he go after other media outlets or just this one time against RCTV? Will opposing media be more or less anti-Chavez due to the RCTV situation? Are the problems between Chavez and the Venezuelan media worse than conflicts with the press in other Latin American countries?

Please feel free to give your opinion by voting in the poll located on the sidebar and/or by leaving a comment to this post.

* In an article published over the weekend in Granma, Fidel Castro blasted U.S. President George W. Bush as "an apocalyptic person."

* Coca-Cola was levied with a $1 million fine for monopolistic practices in .

* Follow-up #1: Opposition in and is mounting against the Chavez administration’s financing of two Danny Glover films.

Will Chavez go after CNN and Globovision?

Less than a day after Radio Caracas Television (RCTV) closed due to the non-renewal of their broadcast license, ’s government seems to be going after news giant CNN and local news network Globovision. According to Bloomberg:

“Communications and Information Minister Willian Lara said CNN last week falsely portrayed a Mexican protest as being in and displayed images of Chavez alongside an al-Qaeda leader. Globovision, a 24-hour news channel, ran scenes from the 1981 attempt to kill Pope John Paul II, which Lara said was incitement against Chavez.

‘This is an effort to associate Hugo Chavez with two things, violence and death,’ Lara said in a televised news conference today in . ‘CNN lies about .””

In the meantime, anti-Chavez demonstrators in alleged that their peaceful protests were interrupted by troops who fired tear gas and rubber bullets at them. The European Union, Reporters Without Borders, and Honduran media groups facing their own problems with the president have condemned the decision against RCTV. (Mind you, not everyone in the is displeased at the closing of RCTV).

Even though RCTV could be transmitted on cable TV, the network’s president did not discard the possibility of “government pressure” to eliminate that possibility.

Contestants from the Americas favorites for Miss Universe crown

Online betting outfits have several Latin American and Caribbean contestants as favorites to win the Miss Universe beauty pageant tonight in . One website has Miss Venezuela Ly Jonaitis and Miss Brazil Natalia Guimaraes as the top two to vie for the crown, while another site has participants from the in eight of the top ten spots.

Several contestants have broken the mold of the traditional Miss Universe candidate such as Miss Jamaica Zahra Redwood. The most radical deviation has been by Miss Sweden Isabel Lestapier Winqvist who dropped out of the competition and said that the pageant “is degrading to women and weighed down by scandals”.

Seventy-seven contestants (image) will aim to succeed Puerto Rican Zuleyka Rivera as the next Miss Universe.

Chile and Bolivia still at odds over border 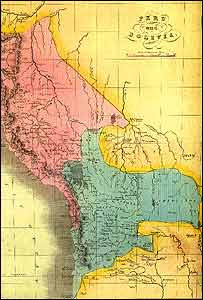 Over a century ago signed a treaty ceding its coastal land to . Since then, citizens of the landlocked country have held slight resentment towards , while ’s government has tried to work out a deal in order to regain access to the ocean.

Despite gradually closer relations between the two countries, continues to refuse Bolivian demands over a coastline. Last week ’s government rejected a Bolivian proposal that would have exported much-needed natural gas from in exchange for granting a coastline. The latest round of discussions has been unsuccessful for ’s territorial demands and it appear that will not bend backwards.

Soccer officials in deemed the measure as “against the right to ‘play where one lives’”, while Peruvian commentators claimed that FIFA caved in to demands by and . Bolivian President Evo Morales has even called for an emergency Cabinet meeting to figure out what to do. Nonetheless, FIFA president Sepp Blatter said that playing at such a high altitude “is not healthy or fair.”

Note: Posting will be a little light over the next 24 hours due to the Memorial Day holiday here in the ; a day of remembrance and reflection.

* Will the ’s “little ” plan be successful or result in a resounding “Bronx cheer”?

* Archeologists in found wooden pieces that may have been used in “peace offerings” by the Aztecs over five hundred years ago.

* The few survivors of a Peruvian government flight that killed thirteen people claimed that inclement weather was to blame for the accident.

* Via Angus Reid: El Salvadoran president Tony Saca has a paltry 23.4% approval rate, while Rigoberta Menchu is a distant third in the race for ’s presidency.

* A chapter in ’s dark past is being reopened with the exhumation of bodies supposedly killed during political repression in the 1970s.

* Colombian songwriter Fabio Alonso Salgado (a.k.a. Estefano) was shot and critically wounded at his residence.

* Follow-up: The beleaguered Universidad de Chile soccer team was saved from bankruptcy and a possible dissolution after a group of investors purchased the club.

Image- ABC News (Construction of a subway tunnel in )

At midnight on Monday, Radio Caracas Television (RCTV) ceased operations. On Saturday, ’s Supreme Court permitted the government to go through with not renewing RCTV’s broadcast license. Throughout the weekend protests for and against the government’s decision have gone on and they are expected to continue. RCTV executives claimed that troops took over RCTV relay stations Sunday evening hours before the network signed off.

As Global Voices Online noted, Venezuelan bloggers are split on the Chavez administration’s decision against RCTV, which had been one of the country’s most vocal anti-Chavez media outlets. For the time being, RCTV has been replaced with a public television station- TVes.