* Brazil: Police have allegedly surrounded a group of drug traffickers in a Rio de Janeiro favela after nearly one week of intense fighting and violence.

* Latin America: Ecuador and Colombia agreed to reestablish diplomatic ties after two years of broken relations due to a controversial military raid on a guerilla camp.

* Haiti: The country’s presidential campaigns head into the homestretch amid reports of violence and mounting tensions.

* Costa Rica: Ex-president Oscar Arias may have to stand trial over alleged irregularities in a major mine concession.

* Cuba: The country’s baseball federation may reportedly allow ballplayers to play in other countries though it would exclude the Major Leagues due to the U.S. trade embargo on Cuba.

* Venezuela: Italy’s Eni will join with Venezuela’s state-owned PDVSA in a $17 billion oil project in the Orinoco basin area.

* Brazil: Hundreds of additional police were deployed in Rio de Janeiro in order to combat in uptick in gang violence.

* Argentina: The government has requested the International Monetary Fund to help redesign an inflation index that is supposedly inaccurate.

"I was sayin' let me out of here before I was even born" is the first lyric of the seminal punk rock song "Blank Generation" by Richard Hell and the Voidoids. This line can be applied to the growing ni-ni youth in Ciudad Juarez, Mexico who cannot afford to go to school but also suffer due to limited job opportunities: 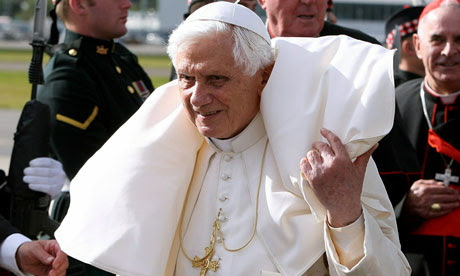 * Vatican: Vatican authorities said that condom use may be acceptable to avoid the spread of AIDS and other diseases yet they are still “immoral” as a birth control device.

* Asia: Tensions increased between the two Koreas after one of the most serious military clashes since the end of the Korean War in 1953.

* Ireland: The Irish government has come under fire over approving an $11 billion bailout from the E.U. and I.M.F. 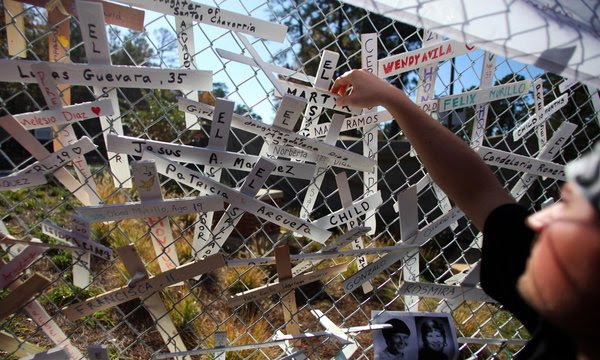 * U.S.: Approximately 5000 people protested outside the gates of Fort Benning last weekend against the military training center formerly known as the School of the Americas.

* Bolivia: "Democracy, peace and security can only be guaranteed without interventionism, without hegemony," Bolivian President Evo Morales said at a defense conference attended by U.S. Defense Secretary Robert Gates.

* Peru: The Peruvian government reached a tentative agreement with Yale University for the return of thousands of Incan artifacts taken from Machu Picchu.

Image – Nicole Bengiveno/The New York Times via the New York Times (“The crosses placed at the fence represent people who are missing or who are believed to have been killed by death squads.”)
Online Sources- Reuters, Democracy Now, JTA, CNN, Independent
Posted by Erwin C. at 3:00 PM No comments:

* Latin America: Upon arriving in Bolivia for a regional defense ministers meeting, U.S. Defense Secretary Robert Gates warned Latin American countries to be “be very cautious and very careful” with their ties to Iran.

* Haiti: "There is no time left for meetings and debate - the time for action is now," said a statement from Doctors Without Borders’ chief in Haiti, Stefano Zannini, regarding the country’s deadly cholera outbreak.

* Venezuela: Pitcher Felix Hernandez became the only second Venezuelan pitcher to win the Cy Young award in the American League.

* Colombia: A “state of calamity” was declared after some of the heaviest rainfalls in decades killed at least 136 people.

Image – Reuters via The Telegraph
Online Sources- CBC, CNN, BBC News, AFP, The Latin Americanist
Posted by Erwin C. at 7:45 AM No comments: