Fences make friends: outside the fence 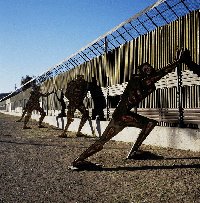 A cause to unite Latin America

Venezuelan liberator Simon Bolivar once wrote in his ‘Letter from Jamaica’ that the nations that now comprise Spanish-speaking Latin America should naturally be drawn to common causes, due to their “common origin, language, customs, and religion”. Over the years Pan Americanism floated in and out of intellectual fashion, though fading through the years as individual nations developed separate experiences and national identities.
Latin America has experienced a surge in continental identity in recent months, as their northern neighbor threatens to build a fence that will physically slice the hemisphere in half. If there was ever cause to make a collective protest against the United States, it is this. Nearly every country south of the proposed wall has a sizeable ex-patriate population in the US, and some, like El Salvador, receive significant proportions of their GDP from remittances.
By proposing the wall and attempting to make illegal immigration a felony, lawmakers are isolating an area of the world that we should have excellent ties with. There is no evidence that illegal immigrants are any more a source of crime or a drain on the economy than the proportion of our own population that is below the poverty line. Congress has made a new set of enemies at a time when we so desperately need friends. 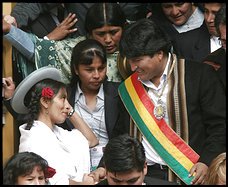 Browse these fantastic stills from The Washington Post (half-way down, right-hand side) (WAPO) WAPO also has commentary from Marcela Sanchez on Morales' first meetings with foreign officials as president-elect (English or Spanish).