* Mexico: “We must do everything possible to fight this evil which destroys our young,” said Pope Benedict XVI in reference to drug gangs that have hurt Mexico. (Update: After arriving in Leon, Mexico on Friday afternoon, the Pope said that he was praying for all the victims of the country's violence "particularly those who suffer because of old and new rivalries.")

* Ecuador: Over 1000 protesters opposed to large-scale mining projects arrived in Quito yesterday where government supporters also held their own rally.

* Argentina: Argentine officials urged the New York and London stock markets to warn investors that five oil exploration firms are “working illegally” off the shores of the Falklands.

* Guatemala: The Guatemalan defense minister called on the renewal of U.S. military aid that had been cut off in 1990 due military abuses in the Central American country’s civil war. 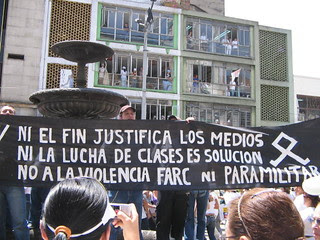 * Colombia: At least thirty-three FARC rebels where killed as part of a Colombian military offensive days after the guerillas killed eleven army soldiers.

* Brazil: Prosecutor Eduardo Santos de Oliveira filed criminal charges against Chevron and Transocean as a result of a growing oil leak off the Brazilian coast.

* Guatemala: A judge sentenced five former paramilitaries to 7710 years in prison for their role in the 1982 massacre of 256 indigenous villagers.

Image Source – Flickr via medea_material (“The ends do not justify the means” reads a poster unveiled at a 2008 Colombian anti-violence protest). (CC BY 2.0)

Are there varying degrees of coincidence or is it a fictitious concept best left for TV sitcoms to look into?

The notion of coincidences comes to mind after an incident that occurred yesterday in the Mexican state of Chiapas. Approximately 43,000 people in Tuxtla Gutierrez participated in a "mega-drill" in order to prepare for an earthquake of 7.9 magnitude. The simulation tested the reaction of numerous local government agencies to a major tremor, mobilized rescue workers and emergency services and gave the chance for citizens to practice how to calmly evacuate.

As the following video from a local Chiapas news channel shows, the drill was an apparent success:

The earthquake preparedness exercises in Chiapas began at noon, three minutes before a real tremor struck in nearby Guerrero state. The quake, which measured 7.4 on the Richter scale, caused residents in parts of Mexico City to flee from buildings and was also felt in Guatemala.

The near identical timing of the drill and the earthquake did not go unnoticed by some Chiapas residents. According to one report:

"Congratulations for the special effects" and "Sabinestradamus" - referring to state governor Juan Sabines - where some of the phrases that circulated among the populace.

Víctor Amezcua, the official in charge of the drill in San Cristóbal de Las Casas, half jokingly distanced the government from the coincidence. "No way, we had no knowledge that would happen. An earthquake cannot be expected. Not even Japan has technology that can predict tremors," said Amezcua.

The simulation was planned months in advance and, aside from the possible coincidence, came at an ideal time. Between January 1st and February 3rd of this year over 180 earthquakes had Chiapas as their epicenter. Thus, accounting for over half of the tremors in all of Mexico during that period of time.

* Brazil: The Brazilian government is urging a thorough investigation into the recent death of a Sao Paulo-born student shot with a Taser gun by police in Sydney, Australia.

* U.S.: According to the Pew Hispanic Center nearly half of all Latinos reside in Texas and California, and the Latino population in the U.S. is “now more dispersed than a decade ago.”

* Cuba: A U.S. judge allowed one of the convicted “Cuba Five” spies to return to his homeland for two weeks and visit his ailing brother.

* Argentina: A strike by grain truckers seeing higher pay will enter its third day with little hope for a prompt resolution.


In Ecuador several hundred demonstrators are nearing the end of their two-week march to protest against government-backed large-scale mining projects. Demonstrators, such as members of Ecuador's main indigenous organization (CONAI), alleged that the new mining would displace entire communities and cause deep environmental damage.

The march began on March 8th, days after President Rafael Correa signed a deal for the $400 million investment in a copper mining project near El Pangui. He has claimed that the project will help bring much-needed development for the region and that the marchers have the “aim of destabilizing” the government.

The protest is expected to finish on World Water Day, which is not a coincidence since critics against the planned project worry that water supplies could become contaminated. According to a report from the informatEcuador website (and translated via Global Voices):

The mining zone for this project is located exactly on one of the main water sources for the city of Cuenca and many other towns. Many inhabitants of these towns are protesting against this activity with very good reason.

The vice president of CONAI said that at least 20,000 demonstrators are expected to converge on Thursday in Quito.

It remains to be seen if the "March for water, life and the dignity of the people" will lead to policy changes. Yet the debate over water usage and control that has affected parts of Latin America in the past will likely continue to be a controversial issue.

In a developing story a strong earthquake has shaken several parts of Mexico.

The main tremor occurred at around noon local time with the epicenter allegedly in the southern state of Guerrero. President Felipe Calderon mentioned via Twitter that no fatalities or major damage have resulted from the quake. Nonetheless, he tweeted that there delays in the distribution of electricity.

Mexico City Mayor Marcelo Ebard tweeted "there is no visible damage, the main services are functioning." Nevertheless, thousands of residents exited from buildings after the main quake that lasted approximately forty seconds.

The following amateur video comes from one of workers several stories up in the Torre Mayor skyscraper:

According to Mexican officials the main earthquake originally measured 6.5 on the Richter scale though the U.S. Geological Service (USGS) reported it as 7.6.

Update: In a pair of seperate press conferences President Felipe Calderon and Mexico City Mayor Marcelo Ebard mentioned that no fatalities or serious damages have resulted from today's earthquakes. Yet a local radio station reported that one person was injured after a pedestrian bridge collapsed over the bus that he was driving in the north of Mexico City.
Officials in the capital of Guerrero state, Chilpacingo, reported that the electricity is out in most of the city and that the phone lines are "saturated."

An official with the Guatemalan seismological agency told EFE that the tremors where noticed in parts of that Central American country.

The USGS updated its data on the main earthquake and now claimed it measured 7.4 on the Richter scale. 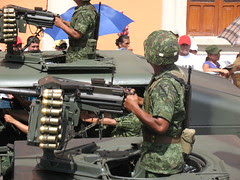 * Latin America: According to a report by the Stockholm International Peace Research Institute global arms imports increased between 2007 and 2011 including an 11% boost in the Americas.

* Mexico: Gunmen killed twelve policemen investigating the deaths of ten beheaded people, while the Knights Templar drug gang called for a ceasefire during next week’s visit from Pope Benedict XVI to Mexico.

* World: According to the Pew Research Center social networks are boosting news consumption but media outlets earned less revenue in 2011.

* England: The health of soccer player Fabrice Muamba is said to be improving slowly after he collapsed in the middle of a match on Saturday due to cardiac arrest.

* Egypt: Followers of Egypt's Orthodox Church mourned the death of Pope Shenouda III who passed away on Saturday at the age of 88.

* France: Authorities will reportedly raise the French terrorism alert to its highest level as a result of an attack on a Jewish school in Toulouse that left four people dead.

On Saturday we took a brief look at the traditional St. Patrick’s Day pilgrimage in Luján, Argentina. Despite the festivities of that day, March 17 is also the grim anniversary of one of the worst killings in Argentina’s post-“Dirty War” era.

Twenty-nine people died on March 17, 1992 when a car bomb exploded outside of the Israeli embassy in Buenos Aires. The incident, which also injured 282 individuals, destroyed the embassy along with a nearby school and Catholic Church.

The following video via the YouTube page of Argentina’s El Tribuno shows footage of the destruction and chaos following the bombing at the embassy:

Argentine and Israeli officials blamed Hezbollah with help from the Iranian government for the 1992 attack as well as the 1994 AMIA bombing that killed eighty-five people. Hezbollah and Iran have denied these allegations, and thus far none of the suspects in the 1992 and 1994 bombings have been convicted in court.

At a remembrance ceremony last Friday for the victims of the 1992 bombing Argentine Vice President Amado Boudou said that the bombing was “an attack against forty million Argentines.”

“The wounds will never heal, much less if we cannot sentence those responsible (for the bombing) to prison,” added Justice Minister Julio Alak.

Last July the Argentine government approved a proposal providing financial compensation for the families of those killed and injured in the 1992 bombing.


* Cuba: Police detained dozens of dissident activists over the weekend, including Ladies in White leader Berta Soler, ahead of next week’s visit from Pope Benedict XVI. (Update: Police reportedly released seventy members of the Ladies in White detained on Sunday. Meanwhile, a White House statement urged the Cuban government to "abandon their tactics of intimidation and harassment to stifle peaceful dissent.")

* Puerto Rico: Mitt Romney easily won over his GOP rivals in the Puerto Rico primary that included the participation of less than six percent of the commonwealth’s electorate.

* Venezuela: Twelve police officials were detained over the killing of Karen Berendique, the daughter of Chilean Honorary Consul Fernando Berendique, in Maracaibo.