Tensions continue between the Chilean government and students seeking educational reform. At least thirty secondary and university students have been on a hunger strike for the past ten days, for example. As the following video shows, police used water cannons in order to disperse a group of protesters in the capital city of Santiago on Thursday:

* Bolivia: The government announced a unique plan to purchase excess coca leaves in order to keep them out of the reach of cocaine producers.

* Chile: Could a weeklong strike at one of Chile’s main copper mines soon come to an end?

* El Salvador: President Mauricio Funes’ centrist policies have apparently put him at odds with hardline members of the ruling FMLN.

* Peru: A former police officer accused of participating years ago in a “death squad” might be deported today from Canada to his native Peru.

Ollanta Humala will be sworn in later today as Peru’s next president and he will be thrown immediately into the fire. Numerous challenges await the former army Lieutenant Colonel, chief of which is to create policies that will bring greater help to the poor without disrupting the Andean country’s growing economy.

The following subtitled video via teleSUR takes a look at Peru’s economic difficulties and includes remarks from the upcoming vice president, Marisol Espinoza:

Tourism up in Cuba says government

The number of visitors traveling to Cuba in the first six months of 2011 has exceeded government expectations according to officials on the island.

The National Statistics Office (NSE) revealed that over 1.5 tourists came to Cuba between January and June, which accounts for a 10.6% increase compared to the same period in 2010. Most of the visitors come from Canada, based on the official figures, followed by Russia, Argentina, and Britain.

The data reflects the gradual increase in tourism to Cuba over the past two decades; roughly 2.5 million visitors traveled to the island last year compared to only 340,000 visitors in 1990. Hence, tourism has emerged as one of the country’s main industries bringing in billions of dollars annually to the Cuban economy.

Prospective visitors from the U.S. face tight travel restrictions as part of the almost fifty-year-long embargo on trade and finance against Cuba. An amendment to an appropriations bill that may be signed into law could place additional limitations on travelers including Cuban-Americans. Yet the NSE claimed that the U.S. is in eighth place in terms of tourist flow.

Despite the limits on tourism, there is “plenty of demand” for some of types of legalized travel from the U.S. to Cuba:

Travel providers and other groups are scrambling to secure licenses and organize people-to-people exchanges in Cuba after a decision by the U.S. government to relax restrictions and allow a wider variety of Americans to visit the Caribbean island for the first time in 7 1/2 years.

So far, the Treasury Department has issued nearly 30 licenses to organizations that say they will provide “purposeful travel,’’ which will allow Americans to reach out to everyday Cubans in “support of their desire to freely determine their country’s future.’’

* U.S.: A Pew Research Center analysis of Census data concluded that the wealth gap between whites and people of color is at its widest point in about 25 years.

* Haiti: Authorities are reportedly searching for a man accused of attacking President Michel Martelly over the weekend.

* Colombia: Ex-Agriculture Minister Andres Felipe Arias was jailed as part of a corruption case where subsidies aimed at helping the poor were instead diverted to wealthy firms.

* Mexico: Police in Ciudad Juarez accused federal officers of firing on them during a prison riot that ended with seventeen people dead.

Image – CSMonitor.com (“A group undergoes computer training on July 12 at STRIVE, a program in Harlem, New York, designed to prepare the unemployed for new jobs. A new study has found that blacks and Hispanics have lost a greater share of their net worth compared to whites in recent years as a result of the troubled economy.”)
Online Sources- Orange County Register, IOL News, Voice of America, BBC News
Posted by Erwin C. at 7:00 AM No comments:

The above video shows the farcical case of a government building in Bogotá, Colombia that has a wheelchair accessible entrance but only stairs to reach offices on the second floor.
On Tuesday we commemorated the twenty-first anniversary of the signing of the Americans with Disabilities Act (ADA) by featuring a video with disability rights advocate Kathy Martinez. She explained that the ADA has helped remove obstacles that have hindered the social progress of the disabled. Nevertheless, she also noted that there are “invisible” barriers related to “fear” and “stereotypes” against the disabled in the U.S.

According to a report released this year by the World Heath Organization and the World Bank, negative “attitudes” on the disabled (like those Martinez pointed out) is one of the many problems facing people with disabilities around the world. Latin America is no exception to this as noted in an article published yesterday on the website of Peruvian daily La Republica:

A court sentenced a bus driver and conductor with a two-year suspended sentence and a civil damages fine of S/. 200 (Ed.- roughly $74) for discriminating against a physically disabled person in Arequipa.

According to the city’s ombudsman both people denied entry to the woman after arguing that her wheelchair “took up too much space”.

Local disabled rights activists and officials that this case can bring attention to discrimination against disabled users of the public transit system in Arequipa and throughout Peru. "The scourge of discrimination perpetuates an environment of exclusion against those who are perceived as different and even inferior, affecting the fundamental rights of citizens and society as a whole," observed Gisella Vignolo of the Arequipa Ombudsman's Office.

It’s worth noting that some progress has been made in countries like Mexico in order to promote the rights of the disabled. Furthermore, several Latin America and Caribbean have signed and ratified the U.N. Convention on the Rights of Persons with Disabilities. But there are still too many obstacles faced by the disabled in the region are including a lack of employment opportunities. They have endured an uphill struggle against social and economic inequality, a struggle that will continue for many years to come.


* Colombia: Rest in peace Joe Arroyo; the salsa legend died yesterday at the age of 55 while he was hospitalized in the Colombian city of Barranquilla.

* Nicaragua: President Daniel Ortega’s bid for reelection may be controversial but a recent poll shows that he holds a massive lead over rival candidates.

Video Source – Unoticias via YouTube
Online Sources- MSNBC, Reuters, The Guardian, InsideCostaRica.com
Posted by Erwin C. at 10:45 AM No comments:

Today marks the twenty-first anniversary of the signing of the Americans with Disabilities Act. In the following video via the It's Our Story project, disability rights advocate Kathy Martinez explains how the law has helped people with disabilities while also pointing out the "barriers" that still remain in our modern society:

Video Source - It's Our Story via YouTube
Posted by Erwin C. at 10:00 AM No comments: 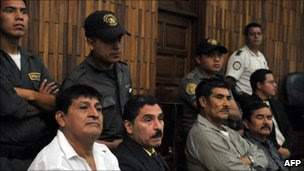 * Central America: Four ex-Guatemalan soldiers are on trial for their alleged role in the infamous Dos Erres massacre in 1982, while Canadian immigration officials said that they will deport a Honduran accused of heading a violent army battalion in the early 1980s.

* South America: Scientists concluded that the results of tests performed on the corpse of independence figure Simon Bolivar were inconclusive as to how he died.

* Chile: Workers are expected to continue a sixth day of striking at one of Chile’s main copper mines.

Image – AFP via BBC News (“The four suspects (front row) deny having been involved in the massacre” of over 200 people in the Guatemalan village of Dos Erres in 1982).
Online Sources- MSNBC, BBC News, MarketWatch, People’s Daily Online, Vancouver Sun
Posted by Erwin C. at 8:30 AM No comments:

Today marked the thirty-third anniversary of the Cerro Maravilla incident where two Puerto Rican pro-independence activists were shot by police under unusual circumstances. The controversial killings shook up Puerto Rican politics during the late 1970s and 1980s. Investigations by the commonwealth's legislature into the event revealed a cover-up effort by some local law enforcement authorities and allegations of possible misconduct in the probes conducted by U.S. federal agencies.

Some members of the Puerto Rican independence movement gathered at the Cerro to commemorate the deaths of Carlos Soto Arriví and Arnaldo Darío Rosado in 1978. (The independentistas view the slain men as having died for their cause and have nicknamed the Cerro as the "Hill of the Martyrs.")

The following video is from a 1984 episode of "60 Minutes" that focuses on the Cerro Maravilla incident. In the report, the late Ed Bradley questions then-Gov. Carlos Romero Barcelo over his claims that the killed men were "terrorists" intent on blowing up a TV transmission tower. The report aired days before Romero Barcelo lost his bid for a third straight term as governor.

The second part of the "60 Minutes" report can be viewed here.

The Brazil Summerfest concert series takes place this week in New York City and one of the groups participating is Forro in the Dark. They'll be performing at a free concert at the City Winery in Manhattan on Tuesday. The delightful rhythms of the quartet of Brazilian expats can be enjoyed live at tomorrow's gig as well as in the below video:

Uruguay showed that their fourth-place finish at last year’s World Cup was no fluke after winning the Copa America title on Sunday.

Los Charruas won their record fifteenth tournament crown after easily beating Paraguay 3-0 in the title match in Buenos Aires. Best player of the tournament Luis Suarez opened the scoring in the twelfth minute while striker Diego Forlan found the back of the net in each half. However it was a total team performance that guided Uruguay to its first Copa America championship since winning it on home soil in 1995.

Paraguay had very few chances at goal though Nelson Valdez had a prime chance at tying the match early in the second half. Yet his 54th minute blast was tipped onto the crossbar by goalkeeper Nestor Muslera and away from danger.

Festivities ran far into the night in the capital city of Montevideo as thousands of fans packed the streets and welcomed their team. As the below video shows, the celebrations commenced since the final whistle was blown and have apparently not stopped:

Several squads shined after the early exits of former titleholders Brazil and host country Argentina in this year’s Copa America. Peruvian Paulo Guerrero was the tournament’s top goal scorer and he helped push his country to a surprise third place finish. Regional minnows Venezuela flipped their status around and enjoyed a Cinderella run into the semifinals.

Uruguay will be looking to continue their renaissance at the Under-20 World Cup that begins later this week in Colombia.

* Ecuador: President Rafael Correa and international press groups are not seeing eye-to-eye in the wake of last week’s libel lawsuit decision against one of the country’s main newspapers.

* Puerto Rico: "I always played for my island," declared Roberto Alomar who became only the third Puerto Rican to be inducted into the Baseball Hall of Fame.

* Venezuela: Ailing President Hugo Chávez returned to Venezuela over the weekend and declared that Cuban doctors could not detect any malignant cells in his body.

Image – EFE via Semana.com (The front page of El Universo was printed blank in response to a judge’s decision that found three of the newspaper’s directors guilty of libel).
Online Sources- New York times, Huffington Post, Los Angeles Times, Al Jazeera English
Posted by Erwin C. at 7:00 AM No comments: