“Save Ignacio Suarez” – “Ugly Betty” touches on illegals in U.S.

In last night’s episode of “Ugly Betty”, the father of protagonist Betty Suarez revealed that he is an illegal immigrant which is why he has a false Social Security number. A few bloggers that watched the episode have speculated on the impact of Ignacio Suarez’ confession; on the one hand, there is the worry that “Ugly Betty” will go down the “PC (Politically Correct) Highway” and “further the agenda of those who think that anyone and everyone should be able to come to America who wants to.” Conversely, a few bloggers praised the “bold and risky move” that seems to “support…valued illegal immigrants.” Odds are that illegal immigration in the Suarez household will reappear during future episodes since executive producer Salma Hayek has had a history of standing up for immigrant rights. Though it remains to be seen whether “Ugly Betty” will make the issue of illegal immigration a prime topic for discussion around the water cooler, it has not stopped CafePress.com from creating a clothing line for fans to “Save Ignacio Suarez” (image).

A UNESCO study published yesterday showed that Latin America and the lead the developing world in pre-school education. The study found that 62% of children in the region attend pre-school which is behind advanced industrialized nations but far ahead of developing regions.

Speaking of education, columnist Andres Oppenhemier recently bemoaned the lack of quality in Latin American universities and praised colleges in the even though a recent study found that the number of international students attending universities has decreased.

Links- All Africa, The Raw Story, The ( ) Hoya, Tribune 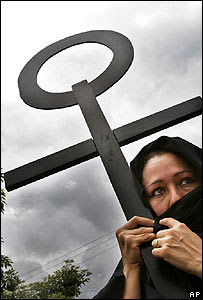 Last night ’s legislature voted to ban abortions under all circumstances including those when the mother’s life is in danger or was the victim of rape. The measure- which was reluctantly supported by leftist legislators- is believed by critics to be a political ploy with a little more than a week before presidential elections are to take place. Front running presidential candidate Daniel Ortega is now staunchly against abortions even though the Sandinista government he led in the 1980s allowed for some forms of abortions. 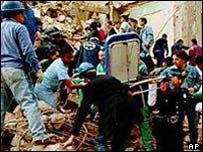 Iran's government rejected charges against them that implicate them in the 1994 bombing of a Jewish charities office in . A few days ago, prosecutors in formally charged the government of and Hezbollah with the bombing, which included accusations against Iranian ex-president Hashemi Rafsanjani who is seen of masterminding the attack (image).

* The leaders of the and met at the White House (image) on Wednesday where President Bush promised to push for the passage of a free trade agreement in Congress.

* Speaking of President Bush, he signed a bill on Thursday that would permit over 700 miles of fencing to be built along the U.S.-Mexico border.

* Via music blog Largehearted Boy: the police force in the Mexican city of Nezahualcoyotl are taking literature classes since “a police officer who is cultured is in a better position to be a better police officer.”

* Via Foriegn Policy magazine's blog: the former president of the Inter-American Dialogue provides his two cents as to why Nicaraguan presidential candidate Daniel Ortega has been friendly towards the U.S. in his campaign rhetoric.

* Mexican singer and actress Lucero was named as one of the hosts of this year’s Latin Grammy Awards which will be held on November 2nd.

* Got to love this quote on Latin pop music from Aterciopelados (image) lead singer Andrea Echeverri: “Music these days is very influenced by figures like Madonna. She has had some strong ideas but society has become a little unconscious and it needs people to question things.” Maybe Echeverri does have a point- the winner of “Latin American Idol” will be crowned tonight and Mexican bubblegum group RBD released a video promoting their (gasp!) upcoming English-language album.

* Sometimes being an international pop superstar isn’t all what it’s cracked up to be as the venue for Shakira’s concert in Venezuela next month was moved based on complaints from local residents.

* Peruvian Susana Baca takes pride in her African heritage and feels that she is a champion of “dark skinned (Peruvians) who are the poorest in my country” inasmuch as she doesn’t believe that she’s a purely political musician.

* Several executives for music giant EMI’s Brazilian division have been suspended due to their role in a major accounting fraud scandal affecting the music industry in . 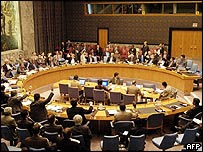 Since last Monday one of the seats on the U.N. Security Council (UNSC) has been vacant as neither nor have received minimum 2/3 support from member states. Now comes news that and have agreed to select a compromise candidate from . So far, has asked two countries to step in as a compromise bid: and the . U.S.-backed candidate has yet to publicly endorse either choice and it’s unclear how states will vote once balloting resumes on October 31st. ( has been an exception so far as their government has publicly supported ’s possible bid).

Rumors have appeared over the past week alleging that George W. Bush purchased 100,000 acres of land in northern near the border of and . The rumors started with daughter Jenna Bush’s diplomatic visit earlier this month with UNICEF (image) where she also met with ’s president. Blogger Plan Colombia and Beyond wonders if the rumors mean anything at all.

* Venezuelan opposition candidate Manuel Rosales (image) said that he would call for a legislative election if he were to upset Hugo Chavez and become president.

* Thousands of truckers in have refused to drive as a protest against the government’s plan to raise the price of diesel fuel.

* ’s government celebrated voters’ overwhelming approval of a plan to expand the .

* The man believed to be ’s worst serial killer was sentenced to almost 21 years in jail for the murder of a 15-year-old boy.

* World Cup winning coach Marcelo Lippi of is one of the finalists for the job of coaching ’s men’s soccer team. Meanwhile, ’s coach has vowed to stay with the team in spite of being offered that position for his native .

* In soccer club action over the weekend, a game in was suspended due to crowd violence while a game involving Argentine league leaders Boca Juniors was postponed due to lack of security.

* From one Boricua to another: New York Mets first baseman and Puerto Rican Carlos Delgado received this year’s Roberto Clemente Award for excellence on and off the field.

* Legendary golfer Jack Nicklaus will help inaugurate in November a golf course he designed in the .

* The 2006 Formula 1 season ended last Sunday in with Felipe Massa winning the race in his home country and Spaniard Fernando Alonso winning the season title for the second straight year.

Image- NFL Mexico (Preparations for the 2005 NFL game in )

Mexican journalist Elena Poniatowska was one of four female journalists prized with the Courage in Journalism award from the International Women’s Media Foundation. Poniatowska (image) was given a special lifetime achievement award by the Foundation in recognition of her tireless work writing for the poor and women against corruption including her famous book on the 1968 Tlateloco massacre.

Peruvian President Alan Garcia publicly admitted to fathering a child while being separated from his wife last year. In a televised press conference on Monday (image), Garcia said that the child- a boy named Federico- would carry his name and will be supported by the rest of Garcia’s family.

’s government denied reports yesterday claiming that California Governor Arnold Schwarzenegger (image) appeared in reelection ads telling consumers not to buy Chilean produce. “We regret the misinformation surrounding the issue…creating an unnecessary uncertainty climate involving a trade partner of great significance as is the ” according to a Chilean government statement released today.

* A bit of old news, but Venezuelan president Hugo Chavez proposed building a railroad from ’s coast all the way south to ’s interior.

* Over 1000 people have been evacuated near the coast of as Tropical Storm Paul nears the mainland.

* Environmentalists in worry that bauxite mining- one of the main industries on the island- is seriously damaging the country's flora and fauna.

On a brief hiatus

It has been about a week since I last posted here and I apologize for such a delayed absence. Unfortunately, the Internet signal here at Latin Americanist headquarters was down (thanks for nothing Time Warner Cable!) In addition, I had been stuck at home with a stomach virus so I couldn't go out to a computer lab to blog or even to check e-mail!

Nevertheless, that was then and this is now. I have a ton of catching up to do here and elsewhere. Regular posting will resume on Wednesday with possibly 1 or 2 posts tomorrow.

In the meantime here are some blogs on Latin America that may be worth your time. Please check them out (as well as our slightly outdated page on blogs and links):