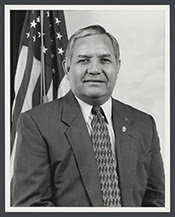 Reyes will be the second Hispanic to head a Congressional committee starting in January. (New York Representative Nydia Velazquez was chosen by Pelosi to head the Small Business Committee).

Image-Biographical Directory of the Congress 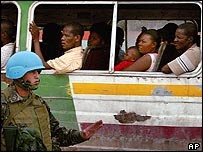 According to a UN spokesman approximately 180 individuals (including 7 Uruguayans) involved in peacekeeping missions have been accused of sexual abuse during various campaigns around the world. “Sexual exploitation and abuse by UN personnel is unacceptable” said Stephane Dujarric in response to this harrowing report from BBC News on exploitation by UN personnel in . It’s sickening and disheartening to read tales like that of a 14-year-old Haitian girl who told a BBC reporter that she was offered candy and some money in exchange for sex with a peacekeeper. 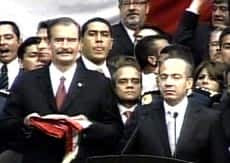 Felipe Calderon was inaugurated earlier today first in a private ceremony at the President’s residence and then publicly inside a divided Chamber of Deputies. Dozens of supporters of vanquished presidential candidate Andres Manuel Lopez Obrador booed, whistled, and even hurled insults at Calderon as he was flanked by now ex-president Vicente Fox and members of the ruling PAN. Some fisticuffs broke out in the hours leading up to the swearing in ceremony as politicians had gone days occupied inside the congressional chambers.

In the aftermath of Felipe Calderon’s inauguration the logical question that follows is “what happens now?” Outgoing president Vicente Fox leaves office to mixed results and Calderon will face a wide range of problems such as severe economic inequality, the seemingly never-ending chaos in , and a politically fractured country. Perhaps Calderon would behoove from the advice given by famed Mexican author Carlos Fuentes:

“he must be president of all the people who voted for him, not of this or that special interest within his own party”.

The sobering reality of the scourge that is HIV/AIDS is the focus today of World AIDS Day. Globally the numbers are grim: approximately 65 million people worldwide infected with HIV and AIDS, and nearly 3 million people died last year of AIDS.

In Latin America and the there are some encouraging signs in a few countries and an International labor Organization report released today estimates that fewer youths in the region will die of AIDS. Unfortunately, the region is hurt by a lack of effective AIDS prevention due to political bickering and lack of funds, and HIV infection has grown in high-risk groups (e.g. prostitutes, homosexuals) throughout the region. 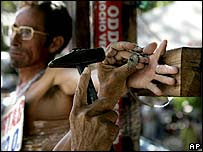 * Ouch! Protestors in have set up a public crucifixion in support of a former general convicted of staging a coup a decade ago. * ’s government “has not lived up to expectations” according to a report on the struggle for land rights.

* A second-half strike by Humberto Suazo helped Chilean side Colo Colo tie against Mexican squad Pachuca in the first of a two-game final for the Copa Sudamericana.

* Mining firms from and the are behind a boom for finding precious metals on the .

* Government officials from the Dominican Republic are trying to work out a deal with Saudi Arabia to build an oil refinery on the Caribbean nation.

Do you “speak good English?”

The next two days I’ll be away from Latin Americanist headquarters which is why I will not be posting until Friday. I apologize for the slight hiatus. Nonetheless, there are some important changes that will be taking place over the next week so please stay tuned! In the meantime, we leave you with a lesson via Overheard in on how to speak English “well” according to a on the subway.

Previous posts linking to Overheard in New York can be found here and here.

A top electoral official said that Rafael Correa (image) won ’s presidential election by an ample margin over business tycoon Alvaro Noboa. White House officials have already contacted and congratulated Correa for his victory in Sunday’s elections, though Noboa has yet to concede and may even ask for a recount.

The original post on Sunday's elections may be viewed here. 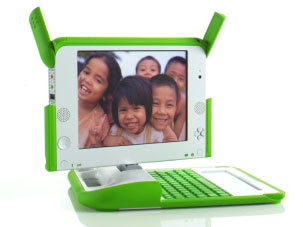 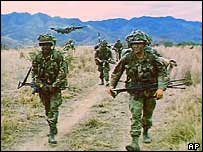 A recently released memo from 1984 showed that Robert Gates- President Bush’s nominee to succeed Donald Rumsfeld as Secretary of Defense- advocated the use of air strikes against ’s Sandinista regime. Gates- who was at the time deputy director of the CIA- warned that the Sandinistas “threatened the stability of Central America” and called for “hard measures” including economic sanctions and increased funds for the anti-communist “contras.”

Gates is expected to pass confirmation in the Senate but not without heavy questioning over his role in and the infamous Iran-Contra scandal.

Update: Opposition leaders from all but one of Bolivia's provinces have threatened to strike if the government does not tone down their proposed reforms. (Link via Bloomberg).

Original post: Bolivian president Evo Morales (image) was forced to cut short a diplomatic trip of in order to tackle growing opposition to government-led reforms. Morales was in the yesterday in talks with the Dutch foreign minister and officials from oil giant Shell.

* Paraguayan president Nicanor Duarte (image, third from left) abruptly fired the head of the armed forces as part of a “routine reshuffling” of the military.

* Good news for Hugo Chavez- a recent poll showed that most Venezuelans wouldn’t mind having a multiple-term president.

* ’s budget deficit continues to fall as the government paid off a year-end social security bonus ahead of time.

* was ranked 24th in gender equality according to a report published by the World Economic Forum.

* Stop me if you’ve heard this one before- ex-Chilean dictator Augusto Pinochet was again put under house arrest based on human rights abuses.

Staunch anti-immigrant legislator Tom Tancredo claimed that U.S. President George W. Bush is going out of his way to integrate the with and . In an interview with Fox News, Tancredo warned that “borders will lose all significance, serving merely as ‘speed bumps’ for goods, services, and people.” The notion of a North American Union has been strongly denounced by conservatives in the as well as the Canadian left-wing New Democratic Party.

’ government fined a U.S.-based firm for illegally hiring more than 300 Hondurans, Chileans, and Nicaraguans to serve as mercenaries in . “The act of being a mercenary is a form of violating labor rights in whatever country” said a Public Safety Department spokesman against the Honduran subsidiary of Your Solutions, which pays a minimum monthly salary of $990 to trainees that allegedly work as private security guards.

The hiring of Latin Americans by private firms to serve as security guards in has become an increasingly common practice, as we reported in August, but so have the complaints alleging illegal activity by recruiters.

Image- photosfromiraq.revolutionweb.org (Honduran trainees of Your Solutions about to board a bus on their way to the airport and work in )

Colombia and U.S. sign trade deal but not without opposition

Representatives of the governments of and the signed a bilateral free trade deal last week which is expected to be the biggest agreement since NAFTA was signed over a decade ago. This is assuming, however, that the deal can be ratified through opposition in Congress which is expected to be much greater once the Democrats start controlling it in January. The free trade deal has been met with mixed opinions in ; business owners anticipate an expanded market for their goods, yet labor unions worry that workers’ rights will be eroded.

The Economist: lack of “full democracies” in L. America

and were the only Latin American countries deemed as “full democracies" according to The Economist’s “The World in 2007” analysis of democracies around the world. Most Latin American states were listed as “flawed democracies,” though a few were labeled as “hybrid regimes” (e.g. and ) and was placed as an “authoritarian regime.”

For another perspective on democracy and Latin America check out this 2004 report from the United Nations entitled “Democracy in : Towards a Citizens’ Democracy.”

Update (November 27th): Based on exit poll numbers and the preliminary vote tally Rafael Correa will become Ecuador's next president. His opponent- right-wing populist Alvaro Noboa- claims that he will not give up until an official tally of the votes is made. Though investors are worried over the changes to economic policy under Correa, it is expected that he will clash heavily with Congress which is controlled by Noboa's political party.
Links- BBC News, canada.com, Monsters & Critics, Bloomberg, Reuters

Original post: Three separate exit polls have indicated that leftist presidential candidate Rafael Correa (image) will win by double digits over business magnate Alvaro Noboa. In remarks from his campaign headquarters tonight, Correa acknowledged that “there is no victor or vanquished…today hope has won.” Electoral observers from the OAS have reported no major problems during Sunday’s voting where voters chose the country’s eighth president in the last ten years.