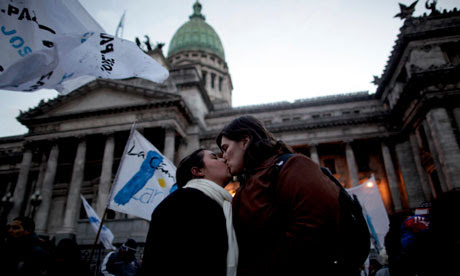 Argentina will be the first Latin American country to legalize same-sex marriages after it was approved earlier this month by the country's legislature. The Church of Jesus Christ of Latter-day Saints (CLDS) took no official position on the proposal though some of its officials publicly opposed it.

Carlos Aguero, the church's public-affairs director for Argentina, was reported to have attended a meeting with other conservative organizations mobilized against the proposal. Furthermore, the church's First Presidency published a letter that was read at CLDS churches throughout Argentina on July 6th that claimed, “marriage is between a man and a woman and is ordained of God." That communiqué fell short of calling for outright political activism similar to actions by the CLDS two years ago in favor of California’s Proposition 8. According to a Mormon historian interviewed by USA TODAY, however, the letter represented a major step for CLDS political activism outside of the U.S.

The actions by the CLDS in Argentina have reportedly been condemned by some of its parishioners such as the Church’s support group for gays:

Affirmation, a support group for gay and lesbian Mormons, is criticizing the LDS Church for its efforts to thwart the legalization of same-sex marriage in Argentina. Last week, Argentina became the first Latin American nation to allow gay marriage. Mexico City also sanctions such unions…

"This is another appalling example of the LDS trying to dominate government decisions being made by democratically elected officials," David Melson, executive director of Affirmation, said in a statement.

In the end the actions by the CLDS may be insufficient to stem the gradual expansion of rights for homosexuals throughout Latin America.

Update: With a stroke of the pen from President Cristina Fernandez on Wednesday, Argentina officially become the first Latin American state to legalize same-sex marriages.

That was rad said...

There is no thing as the Church of Latter-Day Saints

Nicholas is right, it's the Church of Jesus Christ of Latter-Day Saints. Hope Tom agrees, although I don't believe he's LDSr himself; think he's with Ron and the boys...

As Far as Affirmation goes, They have their opinions and they are entitled to them. However, in the grand scheme of things it doesn't matter to the vast majority of Mormons what they think. The church is not led or influenced all that much by public opinion of its members. It is a theoracy that has authority from the top down to its members. While the members support the leaders they do not control or have elections as to policy. If you think that is not right then consider this. When Moses left the Iseralites for 40 days they decided to run things based on what they thought was the right thing to do...A.K.A. Public Opinion. Guess what? They were wrong! Like it or not it is God's way or the highway. Luckily he allows us the right to choose. And gives us the opportunity to repent when we choose wrong. Will God change his position on gay marriage? Although, while I am inclined to believe he won't, I will not say that he couldn't. He did take away the requirements of the Higher Law from the Iseralites and instituted Mosaic Law. He then removed most of those conditions when Christ came. He did allow Blacks to hold the Priesthood. He did stop polygamy. Each of these things had a purpose in the time they were in practice. If he chooses to change the policy on gay marriage, it will be because we have satisfied the requirements for that policy. And at that time, I will stand as a defender of it. BUT, at this time, it has not been changed and I have both a duty and a chose to obey it. Daniel W