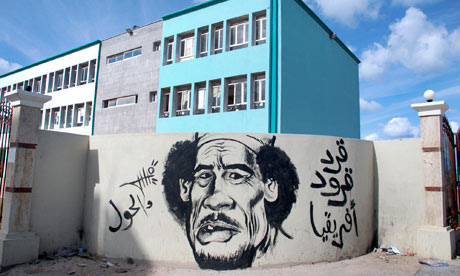 * Libya: Time appears to be running out for Moammar Gadhafi as opposition forces have taken over vast parts of eastern Libya.

* World: The price of oil crept past the $100 per barrel mark reportedly due to unrest in North Africa and the Middle East.

* New Zealand: The death toll from Tuesday’s 6.3-magnitude quake has reached 75 though it’s expected to climb as hundreds of people are still missing.

* India: Thousands of protesters gathered in the capital city of Delhi and called for the government to tackle rising food prices and unemployment.

Image – Alaguri/AP via The Guardian (“Libyan leader Muammar Gaddafi portrayed in a graffiti caricature with writing in Arabic reading, 'The Monkey of Monkeys of Africa', a reference to Gaddafi's self-declared title, 'The King of Kings of Africa'.”)
Online Sources- BBC News, MSNBC, The Guardian, CSMonitor.com
Posted by Erwin C. at 4:45 PM