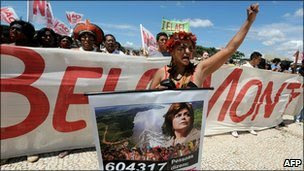 * Panama: Hundreds of indigenous protests angry at a controversial mining law are expected to continue demonstrations for a third straight day on Saturday.

* U.S.: The Agriculture Department has set up a $1.3 billion fund to settle bias claims from Latino and women farmers.

* Latin America: A representative of the Simon Wiesenthal Center urged Latin American governments to emulate Peru and cut off diplomatic relations with Libya.

Image – AFP via BBC News (Environmentalists and indigenous groups protested against a massive dam that was to be built in in the Amazon rainforest.)
Online Sources- Reuters, AFP, Bloomberg, MSNBC, The Latin Americanist
Posted by Erwin C. at 9:00 AM