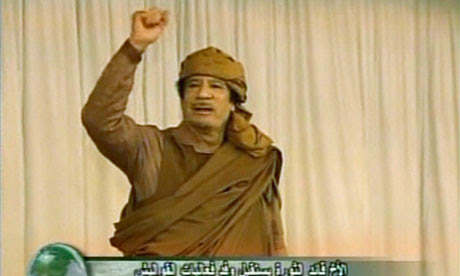 * Venezuela: Embattled Libyan leader Moammar Gadhafi appeared on state TV last night and claimed that contrary to rumors he did not flee to Venezuela.

* Guatemala: President Alvaro Colom removed a two-month "state of siege" on a northern province that was reportedly controlled by Mexican drug gangs.

* Brazil: According to the Brazilian press President Dilma Rousseff will hold off on the purchase of 36 military jets as part of major budget cuts.

* Dominican Republic: Health authorities said that all meat and seafood from neighboring Haiti will be burned and discarded unless it includes guarantee that it's not tainted with cholera.

Online Sources - CNN, Canadian Press, UPI, Sify
Image Source - Reuters TV still image via The Guardian ("A still from footage of Muammar Gaddafi during a rally in Nalut. Regime survival has marked the Libyan leader's moves in recent years.")
Posted by Erwin C. at 8:00 AM