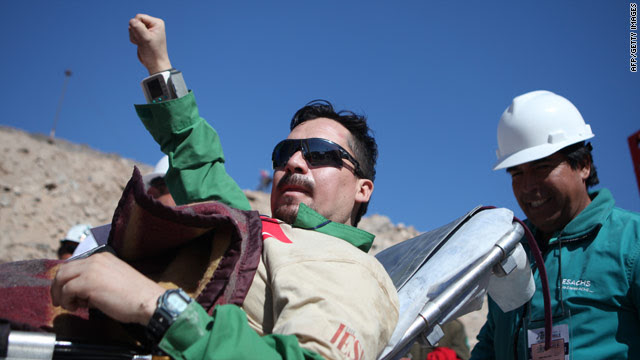 It has been nearly a year since thirty-three men were safely rescued after being trapped in a mine for approximately seventy days. One of the most workers who made out alive was Edison Peña and his instant fame in the weeks since being freed included appearing as a guest on “The Late Show with David Letterman”, the chance to visit Elvis Presley's Graceland mansion and run in the New York City marathon.

Since Peña fell out of the spotlight, however, he has faced his share of difficulties including hospitalization after suffering a panic attack. Earlier this month Peña checked into a Santiago rehab clinic and his wife claimed that he was suffering from "fame disorder." Furthermore, as reported in Chilean daily El Mercurio (and written about in the Latin American Herald Tribune):

Edison Peña, who was nicknamed “the athlete” because he jogged up and down the subterranean galleries at the San Jose mine during the time he and his colleagues were trapped, will remain at the medical center for a month or two to receive treatment for his addictions.

Peña “is in very good hands, he is busy (with) workshops and therapy that are making him well,” said his wife, Angelica Alvarez.

The Chilean mining industry has gone through its troubles since the San Jose mine rescue last October. Several mine strikes and inclement weather have affected production in copper mining, for instance.