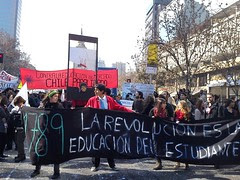 Did the hardline actions of a local mayor in Santiago, Chile worsen tensions between the government and student protesters?

Last week Cristian Labbe, mayor of Providencia, ordered the suspension of the school year and permitted police to remove student protesters who have been residing on local campuses. Labbe also ordered that protesters from the area’s secondary schools sign up to a “government program” that would make up for missed days of school.

At least sixteen people were arrested this morning after clashes between police and individuals upset at Labbe’s edict. In the meantime, Education Minister Felipe Bulnes will meet later today with Labbe though he told the press that he was “definitely displeased and in disagreement” with the mayor’s actions.

Labbe’s orders may have been illegal and overstepping of his authority but they wouldn’t be the first time has tried to put the hammer down on protesters. In 2006 he forced schools to expel students who were involved in demonstrations.

Over the past four months demonstrations have taken place around Chile urging the reform of the country’s educational system. Increased funding for universities and full government control of education are two of the key demands made by the protesters. “The people understand that the crisis in education is in fact a crisis of the model installed under the dictatorship,” student leader Camila Vallejo reportedly said over an educational system virtually unchanged since being established decades ago under the rule of Gen. Augusto Pinochet.

At an event last week at the Council on Foreign Relations, President Sebastian Pinera reiterated his rejection of the protesters’ chief demands. Despite the country’s strong economic growth, he said that the state couldn’t afford to provide free education to all. Pinera also tried to downplay the movement as one that is heavily influenced by elements of the Chilean political left and also criticized coverage of the protests by the media.