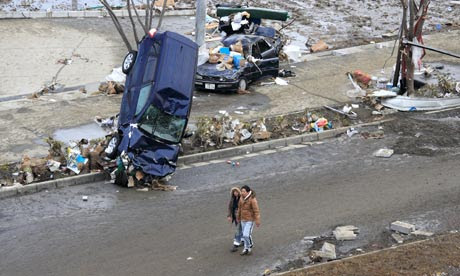 Thousands of people are still missing roughly sixty hours since a 9.0-magntude earthquake and subsequent tsunami battered Japan. Among those yet to be located are a number of individuals originally from Latin America:
100,000 Japanese troops have reportedly been involved in relief efforts while at least 69 countries have pledged to send rescue missions to the Asian country. Mexico’s elite Topos rescue brigade is ready to go to Japan as soon as Monday (assuming that air travel is resumed by then).

Image- Masatoshi Okauchi / Rex Features via The Guardian (“The earthquake and tsunami devastated many towns in Miyagi prefecture, where the police estimated that as many as 10,000 people may have died.”)
Online Sources- La Nacion, La Cuarta, CBC News, Generaccion.com, RPP, Proceso, El Universal, El Espectador, Voice of America, Milenio
Posted by Erwin C. at 5:45 PM