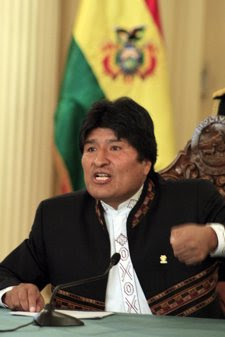 Bolivian president Evo Morales and White House officials do not see eye to eye in terms of how best to combat illegal drugs. In 2008 Morales expelled the Drug Enforcement Agency from operating in Bolivia after the U.S. ambassador was accused of plotting to oust him. More recently the U.S. and Bolivian government have been at odds over Morales’ push to overturn a global ban on coca chewing. The latest chapter in the disagreement between both countries could further worsen diplomatic relations.

The U.S. has “no morality to either speak out or question how Latin American countries fight narcotrafficking” said Morales according to the Bolivian press. He added that the diplomatic row between the U.S. and Argentina over seized military equipment in Buenos Aires demonstrated that Washington “negotiates with the world’s drugs.” Morales questioned that “if (the U.S.) was able to enter illegal dugs and weapons into Argentina then how would it be in other Latin American countries?”

Morales’ ire with the U.S. also included criticizing plans to slash U.S. antidrug aid to Bolivia in half to about $10 million. Supporters and detractors of Morales decried such a move though they differed on who is to blame:

Opposition legislator Luis Felipe Dorado said that this “is the consequence of President Morales’ policies. If there are problems with the (Catholic) Church or with indigenous groups he blames the U.S. Is this the way he wants to attract foreign investment?”...

“It is impossible to compare Bolivian relations to that of the U.S. since one has to take into account the ideologies of each country…In the case of the North American country it’s complicated because the U.S. is capitalist and Bolivia is on a path towards socialism,” said (senator of the ruling MAS coalition Julio) Salazar.