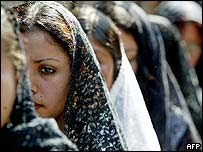 A U.S. federal court ruling could open the doors for Guatemalan women seeking to escape the violence of their homeland.

The 9th Circuit Court of Appeals reversed the deportation order of a Guatemalan woman seeking asylum in the U.S. The judge ruled in favor of Lesly Yajayra Perdomo who argued that her life would be in danger if sent back to Guatemala. More importantly, however, the court said that Guatemalan women as a group could be eligible for asylum due to the high rate of murders against females. Hence, the tribunal decided against two immigration courts that deemed that "all women in Guatemala" would be too broad a social group to fit under the guidelines for asylum.

The decision also has strong implications for women in other Central American countries like El Salvador and Honduras where violence against women is far too common. According to the Center for Gender and Refugee Studies at the University of California, San Francisco's law school over 3800 Guatemalan women have been murdered since 2000.

Department of Justice figures said that in the fiscal year 2009 immigration authorities granted asylum to less than five percent of the 3250 asylum applications from Guatemalans. Those numbers aren’t likely to significantly change according to one analyst:

Proving that Perdomo will face persecution if she is returned to Guatemala and that the country doesn't protect its young women will be hard to prove, he said. Any other Guatemalan women hoping to take advantage of this week's ruling will have to do the same.

"I don't think there's going to be a flood of Guatemalan women applying for asylum tomorrow," (Dean of the University of California-Davis Law School Kevin) Johnson said. "This is part of a trend among U.S. courts to ensure women are afforded protection under asylum laws."