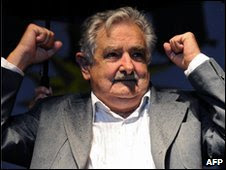 Is Uruguayan president Jose Mujica (to use an famous phrase from the “Lethal Weapon” movies) “too old for this shit”? Perhaps, but the 75-year-old has been ordered by doctors to slow down from his daily routine.

According to presidential physicians Mujica suffers from an “over exposure to stress” since he took office in March. Indeed, as MercoPress noted, Mujica has visited several countries in the Americas since assuming the presidency roughly ten weeks ago and he tends to work between 12 to 15 hours each day.

As a result of the doctors’ recommendations Mujica will skip the Caribbean and the European Union Summit next week in Spain and Vice President Luis Almagro will instead head the Uruguayan delegation. Furthermore, Mujica pledged today to change his habits including undergoing a strict diet:

"I won't have a serious problem if I do something about it ... . I need to control myself and try to prioritize issues rather than do everything at the same time," Mujica said during his twice-weekly radio program.

"I wake up at night at 3 a.m. and my head is buzzing with all kinds of problems," he added.

The leftist, who was jailed for 14 years for his guerrilla activities, said he would switch to a new healthier regimen next week, aiming to fit in an hour's walk and an afternoon nap.

Mujica won’t be the only notable absence at next week’s conference; Honduran President Porfirio Lobo will skip the summit since some countries still do not recognize his government.

Hey ! Genuinely it’s really possible to earn money online; I really felt that this website is quite impressive and a great idea to earn hundred’s of Dollars daily.

I have gone through this blog. Ifound it very interesting and helpful. nowadays I am completing my online degree course from home. So this blog is really doing great for me.