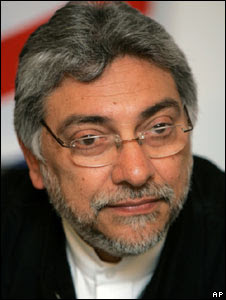 The new law suspends public gatherings and the right to due process in five northern provinces during a span of thirty days. "We want to make clear that this measure does not alter the democratic norm in our country," Lugo said after signing the law yesterday.

The move comes days after authorities blamed the Paraguayan People’s Army (PPA) for killing four people in the country’s agrarian area. The PPA reportedly collected ransoms of $700,000 from a pair of kidnappings, has been accused of drug trafficking, and is said to have cooperated with Colombia’s FARC rebels.

Though the new law was approved almost unanimously by the legislature though one opposition senator blasted Lugo for his supposed passivity in combating the PPA. Meanwhile, the use of emergency powers has been seen by some Paraguayans with trepidation:

Lugo's call for extra powers is controversial in Paraguay, because the measure was used frequently during the 35-year dictatorship of General Alfredo Stroessner, which ended in 1989.

Lugo, a left-leaning former Roman Catholic bishop, has struggled to push laws through the opposition-controlled Congress. Some lawmakers on Friday criticized Lugo's security policies and were skeptical of the measures they said could lead to abuse by security forces…

The last time an emergency measure extending government powers was imposed in Paraguay was in 2002, after violent anti-government protests against former President Luis Gonzalez Macchi.