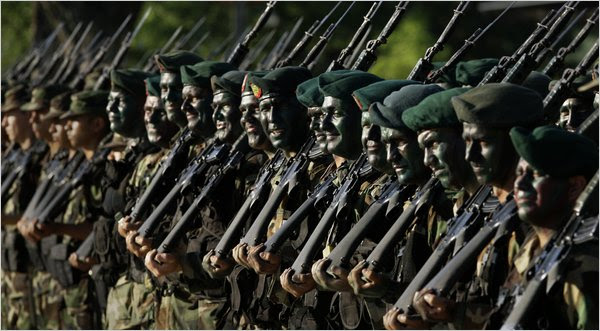 Mr. Lugo, a rather leftist and former Roman Catholic bishop, has refuted rumors that military leaders were plotting a coup, telling reporters in Asunción that “there could be small military groups that are connected to or could be used by the political class,” but that “the military does not show any intent of reversing the process of democratic consolidation.”

Interestingly enough, Mr. Lugo replaced all military officials anyway, which has not put a smile on many faces.

Now-former Paraguayan military commanders were quick to criticize Mr. Lugo’s decision. Especially since the changes this week were the third instance in which he replaced high-ranking military officials since taking office 15 months ago.

According to the New York Times:

Gen. Bernardino Soto Estigarribia, the former commander of the armed forces who was pushed into retirement by the new administration last year, said on a Paraguayan radio station that the president’s move was unjustified and dealt a tough blow to the military.

“You can’t change commanders at such a rate,” he said. “The officers deserve respect.”