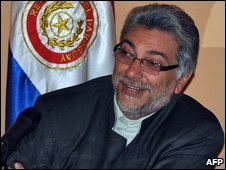 "I believe that only God is perfect, and everything a human being does is imperfect…Therefore celibacy is also an imperfect question for a man or a woman."

---In an interview with Argentine newspaper Clarin, Paraguayan President Fernando Lugo gives his two cents on the celibacy vows taken by Catholic clerics.

A former Roman Catholic bishop, Lugo admitted last April to fathering a child while in the priesthood. Lugo has denied being the father in two subsequent paternity claims.

Many bishops and priests have fathered children almost in every country but these things are known to very few because these are never publicized either by church or by the lay persons so to avoid bad name to church. In an institution one bad example or misdeed may bring bad name to whole institution but we are all humane and can commit mistake.