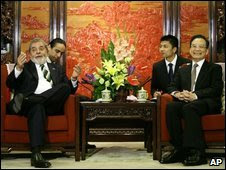 Both countries signed a multibillion dollar deal that would provide China with 200,000 barrels per day of oil from Brazil. In return, Brazil's state-owned Petrobras will receive $10 billion to explore in possibly lucrative offshore areas like the promising Tupi field.

A dozen other accords were signed including an $800 million loan from the China Development Bank to Brazil’s development bank.

Perhaps the most revealing detail of Lula and Jintao’s talks was the possible dropping of the U.S. dollar when both countries conduct trade with each other:

“The discussions have focused on how to improve the financial service system,” Celso Amorim, Brazil’s foreign minister, said today at a briefing in Beijing. “In terms of what currency to use, we are still discussing”...

I would appreciate if we could touch base, as I would like to broach the potential of discussing collaboration with you, as we see some excellent cross over potential regards articles & our target niche segment.

We are in pre-launch of a new platform dedicated to BRIC & Emerging Markets, finance & economic themes. Similar to other portals, we offer our contributors the opportunity to maintain a biography on our site with links back to their homepage / blog, thus opening up a potentially wider reader base. I would be interested to know if you would like to collaborate with us on article submission for syndication ?

More details can be found on our blog : http://mystockvoice.wordpress.com

If you would like to have a chat on the phone, let me know, more than happy to run through my thoughts with you

I look forward to your response