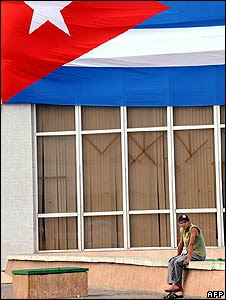 In an article written in the Cuban press, Castro seemed to be pleased that President Barack Obama scrapped "several hateful restrictions" enacted by the previous presidential administration. Castro briefly struck a conciliatory tone when he wrote that the Cuban government would be willing to normalize relations with the U.S. Yet he also blasted the forty-year long blockade which he labeled as a "truly genocidal measure". “The conditions are there for Obama to use his talent for a constructive policy to put an end to what has failed for almost half a century,” mentioned the ailing former leader.

Yesterday’s move to removing limits on travel and money transfers by Cuban-Americans to the island was seen with mixed eyes by different members of the Cuban community in the U.S.:

"So many people have been calling," said Ofelia Gutierrez, a Cuban immigrant and the manager of Costamar Travel in Union City, N.J. "They are really excited about it, asking 'Is it true we can go?'"

"We hope that the administration will reserve (dropping the trade embargo) for future steps when conditions on the part of the Cuban government have changed and political prisoners have been freed," said Francisco Hernandez, director of the Cuban American National Foundation in Miami…

Anonymous said...
This comment has been removed by a blog administrator.
9:37 PM