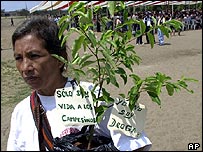 Leaders of ’s second-largest guerilla group denied government claims implicating them in the cocaine trade. “We do not cultivate illicit crops, operate cocaine production laboratories or traffic in drugs. This is ELN policy” said a spokesman for the National Liberation Army (ELN, in Spanish) against comments made by Colombian peace commissioner Luis Carlos Restrepo.

On a related note, Peruvian president Alan Garcia warned that the country will face a civil conflict akin to ’s unless drug labs and clandestine airstrips are destroyed. Garcia seems to be reacting to the increasing danger being posed by Peruvian drug dealers, as the Christian Science Monitor observes.

The short answer is that the Colombian public tends to look down on the ELN (and the FARC for that matter) so the average Colombiano would lean towards Restrepo's comments.