In the biggest upset of the tournament so far, World Cup first timers to a scoreless tie. In a game were was expected to easily win, the “Soca Warriors” held up with last minute starting goalie Shaka Hislop making several fantastic saves and in light of being a man down for almost the entire second half. The smallest country ever to qualify for the World Cup, Trinidad will have to face England Thursday afternoon and hope they make their fans as proud as they were against Sweden.

were fortunate to score in the first minutes of their first match; sadly,

it was an own-goal off the head of defender Carlos Gamarra. The own-goal was the lone goal in the Paraguayan's 1-0 loss to . The "Guaranis" created few clear scoring opportunities, especially in the second half where possessed the ball most of the time and its defense held up rather well. A loss in their next game against and will be elimin

ated from the World Cup.

had little trouble in defeating the 2-1 via first half goals from Hernan Crespo and Javier Saviola. Juan Roman Riquelme could have been man of the match since he assisted on both goals. will most likely qualify out of the “group of death” and into the second round if they win their next match Friday morning against and .

will be the lone Latin American representative playing on Sunday when they face .

Goalkeeper Oswaldo Sanchez is expected to start inasmuch as he had to return to earlier this week due to his father’s sudden death. “El Tri” are the top seed in Group D along with , , and; kickoff for ’s first match is set for 12pm.

Three teams from Latin America and the Caribbean play in today’s World Cup tripleheader in . The first match looks to be the best as faces off against perennial favorites . Paraguayan striker Roque Santa Cruz has recovered very well from a serious leg injury to start today’s match, while midfielder Pablo Acuña observes the importance of this game for the “Guaranis” in that “we can’t concede any advantages…(the game ) is like a final.” typically plays with a very physical style and today shall be no exception especially to control the English striking duo of Michael Owen and Peter Crouch. (Kickoff set for 9am EST).

At around 12pm noon, World Cup first timers will play against

. The smallest country ever to qualify for the World Cup, Trinidad are not expected to make any major impact in the tournament and could easily leave Germany with three first round defeats. Worse, Marvin Andrews reinjured his knee during training and will miss today’s match and possibly the second game on Thursday. Yet with the odds stacked against them, the “Soca Warriors” are more than ready to enjoy the World Cup experience and make their country proud.

odds, favorites start the road to the final today as they face newcomers in . is expected to easily win today, though they do not underestimate the potential for the Ivorians to pull off an upset. Midfielder Juan Roman Riquelme is the lynchpin of the “albicelestes” who are looking to surpass their disappointing performance in 2002 when they failed to make it past the first round. (Kickoff set for around 3pm EST).

paraguay, argentina, Trinidad and tobago, soccer, world cup
Posted by Erwin C. at 9:00 AM No comments: Links to this post

In the first match this year’s soccer World Cup, lost 4-2 against hosts with Paulo Wanchope (image, left) scoring twice in a losing effort. played well but not in convincing fashion over the Central Americans. Even in defeat, the “ticos” were pleased with the team’s performance as coach Alexandre Guimaraes noted that “we didn’t feel we made many mistakes today…we have great potential to do well in the other two games.”

In a slight upset, shut out 2-0 with a goal and an

assist by Agustin Delgado, (image, right) who started the match despite a knee injury. “El Tin” Delgado set up Carlos Tenorio’s goal in the 24th minute and scored in the 80th minute to seal a crucial victory for Ecuador in front of a mostly pro-Polish crowd. With the win, is in good position to qualify for the second round, especially if they win there next game Thursday against .

From the presidency to prison: Luis Gonzalez Macchi sentenced to 6 years behind bars 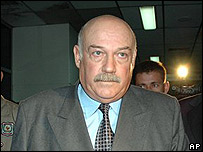 Ex-president of Paraguay Luis Gonzalez Macchi (image) was sentenced to 6 years in jail on Monday for running an embezzlement scheme to pocket $16 million on the sale of two government banks. Gonzalez Macchi was Paraguayan president from 1999 to 2003 and faced a weakened economy and little support in the legislature.

paraguay, corruption
Posted by Erwin C. at 5:48 PM No comments: Links to this post

Today marks the inaugural set of games for this year’s soccer World Cup hosted by . In the first match, Costa Rica will face Germany, which is not an easy task given that the hosts are strong favorites to win the World Cup and the “ticos” have three injured players that may miss the game including their goalie. Nonetheless, coach Alexandre Guimaraes does not ignore the possibility of a massive upset to start the tournament. (Kickoff set for around 12pm EST).

In the only other game of the day, will face off against . Key Ecuadori

an striker Agustin Delgado may miss the game with a nagging knee injury, and coach Luis Fernando Suarez has been tightlipped about revealing the team’s lineup until just before the game. Yet Suarez is optimistic of pulling off a victory against the Poles and starting off on the right path. (Kickoff set for around 3pm EST).

Costa Rica, ecuador, soccer, world cup
Posted by Erwin C. at 9:42 AM No comments: Links to this post

Not content with t-shirts and posters, Bolivia offers “Che trail” to tourists

Capitalism + nostalgia for famed revolutionary Che Guevara = the “Che trail,” a 500 mile path along landmarks associated with Guevara’s 1967 battles in . Though the trail has yet to be finished, local Bolivians are excited with the income that could be created by the venture, including museums and hotels dedicated to the memory of “el Che.” (Image is of a large bust of Che Guevara along the “Che trail”.)

bolivia, che guevara
Posted by Erwin C. at 9:39 AM No comments: Links to this post

A study conducted by the Fordham Institute found that 30 states (such as ) have “weak or non-existent standards” for teaching Latin American history. The study focused on world history, yet researchers were surprised at the lack of a comprehensive plan by most states to teach Latin American history. (Main link via Hispanic Tips).

latin america, education
Posted by Erwin C. at 10:50 AM 2 comments: Links to this post

About 500 protestors were arrested on Wednesday for violently demonstrating in including fighting with police and smashing windows. The protestors represented a splinter group of MST, an organization representing landless farm workers.

Correction: According to MST, they are not affiliated to the group protesting yesterday in Brasilia.

brazil, protest, land reform
Posted by Erwin C. at 10:43 AM No comments: Links to this post 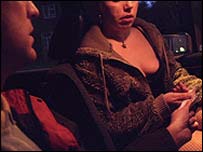 A report released on Monday by the U.S. State Department accused 12 countries of not doing enough to combat the sex-slave trade. Interestingly, most of the states criticized in the report are constantly at odds with the including and . ’s government has denounced the report as an attack against leader Hugo Chavez. ( was the third and last Western Hemispheric country mentioned in the Trafficking in Persons Report).

latin america, human rights
Posted by Erwin C. at 10:39 AM No comments: Links to this post

Oppenheimer: “Biggest threat to Uribe- his own success”

Columnist Andres Oppenheimer warns Colombian president Alvaro Uribe (image) to keep his hubris in check and not allow excess power to undermine his second term. Oppenheimer notes that reelected leaders in tend to hurt their countries after a first term in office.

colombia, politics, alvaro uribe
Posted by Erwin C. at 5:13 PM No comments: Links to this post

Community blog Metafilter posted several interesting links related to Operation Condor, which was a comprehensive plan of intelligence and counter-terrorist operations carried out by right-wing governments friendly to the U.S. (such as those of Augusto Pinochet (image)) between the 1950s and 1980s.

The silver anniversary of the discovery of AIDS last week was a painful reminder that the number of AIDS cases in Latin America has increased with the Caribbean HIV rate second to that in sub-Saharan . Still, the issues of sex and AIDS have become less taboo throughout the region, and governments have taken a more active part in AIDS prevention. During last week’s conference at the United Nations on AIDS, , , and agreed along with 14 other states to adopt a tax on airline tickets that would help pay for AIDS drugs.

Chile, brazil, nicaragua, AIDS, latin america, caribbean
Posted by Erwin C. at 5:43 AM No comments: Links to this post

A U.S. State Department official warned of “the pied pipers of populism” during an OAS conference on Monday. Deputy Secretary of State Robert Zoellick declared that the region is not divided between left and right, but rather “democrats and authoritarians.” (Image is of the title card to the 1961 Speedy Gonzalez cartoon “The Pied Piper of Guadalupe”).

latin america, bush administration, international politics
Posted by Erwin C. at 5:40 AM No comments: Links to this post 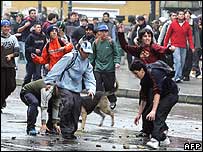 Chilean students impatient over reforms promised by president Michelle Bachelet rejected an appeasement offer made by the government yesterday. Students have staged sit-ins in school buildings for nearly two weeks and clashed with police several times last week in . Though negotiations appear to continue, student protestors have called for a national education strike to take place today.

latin america, chile, politics, protest
Posted by Erwin C. at 10:44 AM 2 comments: Links to this post 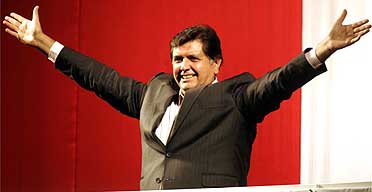 Former president Alan Garcia won ’s presidential election over Ollanta Humala with approximately 55% of the votes compared to Humala’s 44.5%. Garcia (image) assured supporters that he will run a “thrifty and austere” administration in order to avoid destroying the Peruvian economy as he did during his presidency between 1985 and 1990. Aside from ensuring that he does not repeat past mistakes, Garcia will have to find a way to unite a deeply divided country hurt by ethnic and class divisions.

alan garcia, peru, election, politics
Posted by Erwin C. at 10:24 AM No comments: Links to this post

Monday May 29: MTV Latin begins a week-long series of interviews focusing on ’s presidential candidates. Uruguayan leaders meet to rally support for a plan to construct a paper mill near the Uruguay-Argentina border.

Tuesday May 30: On a visit to , Hugo Chavez signs several energy contracts that are expected to save $300 million in fuel imports for . A report from the Brazilian Catholic group asserts that there has been an increase in the murders of the country’s indigenous people.

Friday June 2: Latin American currencies weakened against the dollar based on the possibility of a faltering economy. ’s government partially acquiesced to student protesters that hade been demonstrating for the past week.

Saturday June 3: 's government begins a land distribution program that would give away “idle land.” Several Latin American states agreed to a comprehensive energy plan that includes constructing a pipeline from to Panama.

Sunday June 4: will sell weapons to in spite of a U.S.-imposed arms ban against . Exit polls show Alan Garcia beating Ollanta Humala for the Peruvian presidency.

latin america, history, economy, politics
Posted by Erwin C. at 9:56 AM No comments: Links to this post