* Mexico: Authorities captured Oscar Garcia, a former Marine who allegedly carried out or ordered over 600 murders on behalf of drug gangs.

* Venezuela: President Hugo Chavez claimed that his chemotherapy in Cuba was going well and added that he “will be back in Venezuela soon.”

Image – AP via Boston.com (“A woman celebrates outside the court at the end of a trial in Guatemala City” last week.)
Online Sources- BBC News, Reuters, MSNBC, Bloomberg

* Latin America: Most stock markets throughout Latin America made modest gains yesterday though a senior Economic Committee for Latin America and the Caribbean official warned that global market volatility could have an adverse effect on the region.

* Chile: Tens of thousands of protesters continue to demonstrate in cities like Santiago and Valparaiso in favor of public education reforms.

* Brazil: The country’s indigenous rights agency claimed that drug traffickers from Peru “invaded and looted” a remote Amerindian village in the Amazon.

A Mexican court refused to extradite to the U.S. an alleged drug trafficker nicknamed the “Queen of the Pacific” while Colombian authorities captured a supposed female figurehead in the Sinaloa gang. Despite the criminal connections of these two ladies there has been several pieces of positive news for women in Mexico over the past few weeks.

In Mexico City, the metropolis’ government passed a law that codifies the crime of femicides. The reform to the local criminal code was enacted two weeks ago and includes sentences of up to sixty years in prison.

Under the new categorization femicides are defined as gender-based murders that may include sexual abuse or discrimination against woman. This was the criterion being applied to the arrest of a man arrested and charged with femicide only three days after the law was enacted. According to local police the suspect “got annoyed because the (daughter of his girlfriend) was biting her fingernails and hit her several times causing her death.”

Other Latin American countries are ether considering or have already made femicides a stand-alone crime. In Peru, for instance, Minister for Social Development Aída García Naranjo said last week that she would introduce a proposal to try to combat an increased number of murders against women.

Meanwhile, Mexican women’s rights activist Consuelo Morales was one of the seven winners of this year’s Alison Des Forges Award for Extraordinary Activism from Human Rights Watch (HRW). The human rights group recognized Morales for her “courageous efforts in finding and end to impunity and to help the victims of the ‘war on drugs’ in Mexico.” HRW praised her work for the Monterrey-based Citizens Supporting Human Rights group that “documents these abuses, litigates key cases, and provides critical support for victims of both security forces and violent drug cartels.”

Lastly, a group of women in Mexico City have organized protests against cantinas that illegally discriminate against them. The Women to the Cantinas group claimed that several establishments have refused to serve prospective female clientele while male customers harassed others.

The manager of one of the bars in question denied that his employees discriminated against women. One customer made it be clear that he was certainly not pleased with the protests:

There are places for everyone; for women, for gays,” a resident Archie Bunker who declined to give his name told Reforma. “Can’t there be a single place just for men? I come here because of the tradition that we run women out.”

Then, declaring himself “a misogynist,” he fled into the night with the rest of the regular male customers. 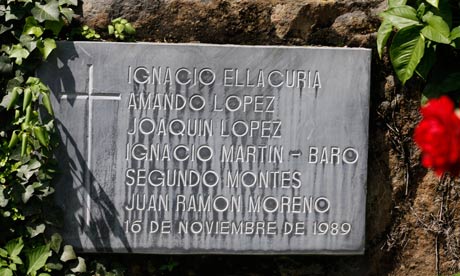 * El Salvador: Nine former Salvadoran soldiers detained for their supposed role in the infamous murder of six Jesuit priests in 1989 could be extradited to Spain.

* Venezuela: Three people including two former prison governors were charged with corruption in connection to deadly rioting weeks ago at the El Rodeo prison.

* Mexico: An alleged “anti-technology group” took responsibility for setting off a bomb that injured two university professors at a college campus near Mexico City.

Image – Reuters via The Guardian (“A stone engraved with the names of the six Jesuit priests killed during El Salvador's 1980-92 civil war.”)
Online Sources- The Latin Americanist, Reuters, The Guardian, Voice of America, BBC News

* Guatemala: A judge ordered that a U.S. couple return their adopted daughter after the court found that the girl was kidnapped from her Guatemalan birth mother.

* Mexico: According to newly released data fewer migrants are entering Mexico but there has been a sharper decline in migrants leaving the country.

* Cuba: A U.S. travel firm that secured a license for “people-to-people exchanges” in Cuba abruptly suspended its planned trips to the island.

The aftermath of last week’s U.S. debt ceiling debacle and the downgrade on Friday of the country’s credit rating by Standard & Poor’s has caused a massive selloff in the global stock markets. Latin American markets have not been immune to the apparent crisis in the international financial sector.

Argentina’s stock market may be the region’s hardest-hit before the end of trading today. The Merval index nosedived by at least 9.17% with sixty-nine of the index’s seventy-three stocks in the red. Among those companies suffering the greatest losses are Mirgor (- 14.17%), Petrobras Argentina (- 12.09%) and Edenor (- 10.00%).

In Brazil, meanwhile, the Bovespa index plummeted this afternoon by a least 8% after plunging by 5.6% by mid-day. The early afternoon loss thus represented the lowest intraday level in over two years and the nadir of a two-week long market decline.

Earlier today President Dilma Rousseff admitted that her administration would be willing to “take any measures necessary” in order to stem Brazil’s financial troubles. Yet in a press conference with visiting Canadian Prime Minister Stephen Harper, Rousseff also promoted the importance of stronger trade relations and observed that Brazil “can't mess around right now and go out spending what we don't have.”

Rousseff’s remarks about avoiding overspending were coincidentally echoed by Uruguayan president Jose Mujica. “There’s no other reasonable solution than to follow the criteria of a good housewife,” noted Mujica in an interview with a local newspaper. He further observed that in terms of the regional economy South America has done “very well” but “from Colombia towards the north the dependency on the U.S. market is complicating matters.”

For other countries in the region the financial news wasn’t positive at all:
The region’s currencies also suffered losses today as uncertainty looms over the future of the global economy:

In an effort to limit potential losses, investors are selling stocks, bonds and currencies to hold more liquid assets. For many, that means the U.S. dollar, the most liquid asset of all, said Diego Donadio, Latin America currency and debt strategist for BNP Paribas in Sao Paulo.

"The important thing to remember is that the downgrade has increased the level of uncertainty in the world and raised doubt about exactly what is a risk-free asset," he said in an interview.

"In a moment like this, you buy the most liquid asset, the main asset that your debts and trade is valued in, and in Latin America, that's the dollar."

* Venezuela: Leaders of Venezuela’s main political opposition group are reportedly against a U.S. Congressional bill backed by several legislators critical of President Hugo Chavez to cut off funding to the Organization of American States.

* Haiti: Rest in peace Jean-Claude Bajeux; the Haitian human rights activist and scholar passed away Friday at the age of 79.

* U.S.: Los Angeles businessman Alex Meruelo will reportedly become the new owner of the Atlanta Hawks and, thus, the first Latino to own a major stake of an NBA team.

* Mexico: An accused “top Mexican drug trafficker” from the Sinaloa gang claimed that he has legal immunity based on his supposed work as an informant.

Image – Getty Images via The Telegraph (According to The Washington Post, a letter was sent by Venezuela’s United Democratic Coalition to U.S. Rep. Ileana Ros-Lehtinen voicing their concern over a proposal to eliminate U.S. funding of the OAS).
Online Sources- Washington Post, CBS News, AHN, Reuters

To see art in Sao Paulo, Brazil you could visit the Sao Paulo Museum of Art or the National Museum of Fine Arts. But one of the most interesting art scenes could be found on the walls of the flagship store for shoemaker Melissa. The latest project can be appreciated in the below video, which pretty much speaks for itself: