Al Jazeera International, which is set to begin at the end of this month, has established two bureaus in Latin America- Buenos Aires and . The department will be headed by Lucia Newman, formerly CNN bureau chief in .

While Peruvian federal elections took place last weekend, over one million Italians abroad voted in that country’s parliamentary elections. Approximately 52% of Italians in Latin America voted, especially in , and this was crucial in the victory of center-left challenger Romano Prodi over Prime Minister Silvio Berlusconi.

So now what? Columnists opine in the aftermath of April 10th rallies Several columnists give their opinions over immigration reform in this USA Today article. (via Hispanic Tips). Meanwhile, Andres Oppenheimer extends a hearty "thanks" to the anti-immigrant triumverate of James Sensenbrenner, Lou Dobbs, and Samuel Huntington for providing a strong impetus for the April 10th pro-immigant protests.

There has been some debate around the blogosphere over how to treat the suicide of Anthony Soltero, a 14-year-old from Californian who shot himself after being disciplined for taking part in a student walkout during school hours. Latino Issues believes that Soltero should have been better able to face the consequences of skipping school and wonders what role his mother should have played. Conversely, a poster to VivirLatino believes that Soltero justly took part in a protest against unjust laws and the school overreacted with Soltero’s punishment.

So what do you all think about the case of Anthony Soltero? 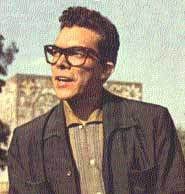 Cameron Macdonald reexamines the cocktail lounge music of Juan Garcia Esquivel and opines that Esquivel’s tunes were more than just part of a mid-1990s fad towards 1950s kitsch. (Link courtesy of largehearted boy).

The former head of ’s secret service has been accused of being involved in a corruption scandal including allegations of meeting with paramilitary leaders and a supposed plot to kill Hugo Chavez. An aircraft carrier strike group headed by the USS Gorge plans to start military exercises this Friday in St. Maarten as part of U.S. “commitment to the region,'' according to a military official. Hugo Chavez has derided the military deployment as part of a invasion of , though one political expert feels that the is using this as an opportunity to show interest in the . 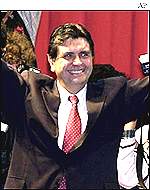 Former president Alan Garcia leads businesswoman Lourdes Flores by 1.1% with about 85% of votes counted from Sunday’s election. Earlier today, claimed that 6000 voting sheets were not counted due to technical problems.

Public health workers and airplane laborers have joined bus drivers in opposition to recent changes enacted by ’s government. Other labor unions are expected to join the protests.

Ollanta Humala won ’s presidential election with nearly 30% of the vote, yet fell far short of the majority needed to avoid a runoff. Humala’s closest rivals, Lourdes Flores and Alan Garcia, are running neck-and-neck to see who will meet Humala in a run-off; as of tonight at 7:30pm EDT, Garcia has less than a half percent lead over with slightly more than 75% of votes tallied. Meanwhile, congressional elections also held yesterday show Garcia’s party winning just over 20% of votes, though the big surprise was a pro-Alberto Fujimori party winning 13% of the vote including Fujimori’s daughter and brother.

. . Atlanta. . These are a few of the cities where several hundred thousand protesters marched nationwide today as part of a “national day of action” for immigrants’ rights. “We just came here to work. We're not terrorists”, said one marcher who attended a rally in . Very small numbers of anti-immigration activists protested as well, such as the dozen who yelled “Go back to ” during the massive rally in on Sunday. BBC News has a photo slide show of today’s demonstrations.