We'll discuss in more detail on Monday the untimely and tragic death of Argentine folk singer Facundo Cabral. For now, we will let his music speak for itself: 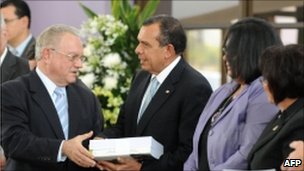 * Honduras: According to the Honduras Truth and Reconciliation Commission the 2009 ouster of ex-president Manuel Zelaya was an illegal coup though he previously “defied court orders” by seeking a referendum for a constitutional assembly.

* Mexico: The United Nations human rights chief added to mounting global criticism of Thursday’s execution in Texas of a Mexican national who did not receive immediate consular help as stipulated in international law.

* Caribbean: Manuel Galban, a Cuban guitarist who was a member of the Buena Vista Social Club died on Thursday at the age of 80 while esteemed Puerto Rican historian Ricardo Alegria also passed away on that day.

* Chile: President Sebastian Pinera’s approval rating last month (31%) marked a new low for the man whose favorability has nosedived since the rescue of 33 miners last October.

* Latin America: The Under-17 men’s World Cup final on Sunday will be an all-Latin America affair with Uruguay facing host nation Mexico.

Image – AFP via BBC News (“The Truth Commission says Mr. Zelaya and those who ousted him bear responsibility for the coup.”)
Online Sources- Al Jazeera English, Bloomberg, CBC News, CBC Sports, CBS News, CNN, LAHT, The Latin Americanist
Posted by Erwin C. at 9:30 AM No comments: Links to this post

Should the state of Texas go through with the planned execution of Mexican national Humberto Leal Garcia? The main issue is not over the death penalty, per se, but regarding the likelihood that his legal rights were not met. Federal officials determined that Texas authorities did not tell Leal Garcia of his right to immediate help from Mexican consular officials as they are required to under the Vienna Convention on Consular Relations.

In recent weeks numerous figures including the governments of several Latin American countries have tried to intercede on behalf of Leal Garcia who is scheduled to die by lethal injection today. As was the case under the Bush administration with death row inmate Jose Medellin, the Obama administration has sought to suspend the execution of Leal Garcia.

For one diplomat, the possibility that the state will kill Leal Garcia could have serious consequences for U.S. citizens residing abroad:

“If we do not comply with our obligations under the Vienna Convention on Consular Relations and the U.N. Charter,” said John B. Bellinger III, who was the State Department’s top lawyer in the administration of President George W. Bush, “we put at risk Americans, including Texans, who travel and may be arrested overseas. It is surprising that Texas does not recognize the risks it may be creating for its own citizens.”

Texas Gov. Rick Perry, who has presidential aspirations and could run next year, is expected to go through with the execution. Regardless of the outcome, the Leal Garcia case will likely not quell the controversy over the application of the death penalty on foreign nationals:


Update: Humberto Leal Garcia was executed via lethal injection on Thursday night. In a 5-4 vote that ran along ideological lines the U.S. Supreme Court rejected the appeal seeking a stay of execution for the Mexican national who was convicted in 1994 of raping and murdering a minor.

After the court's decision Texas Gov. Rick Perry allowed the application of the death penalty to go ahead. According to The Guardian the office of Texas Gov. Rick Perry's "argued that Leal Garcia was guilty of a heinous crime and deserved to die." While that may be the case, such reasoning detracts from "Obama administration lawyers and a broad cross-section of legal and foreign policy experts" who argued that Texan officials violated international law. (As we mentioned in the original post, he was denied their right to immediate legal help from the Mexican consulate).

Leal Garcia became the 26th person to be executed in the U.S. so far this year and the 18th in Texas. According to Human Rights Research (via AFP) there are"at least 132 foreign nationals
from 34 countries on US death rows."

* Mexico: A sixteen-year cross-border trucking dispute between the U.S. and Mexico could soon be resolved unless the U.S. Congress rejects a bilateral deal.

* Paraguay: A planned expedition spearheaded by Britain’s National History Museum was cancelled partly due to possible health risks when coming into contact with indigenous Paraguayan tribes.

* Peru: Official celebrations began yesterday to commemorate the centennial anniversary of the discovery of Machu Picchu by Hiram Bingham.

* Brazil: Transport Minister Alfredo Nascimento resigned from his post over allegations of corruption in the awarding of contracts.

Image – John Nordell / The Christian Science Monitor via CSMonitor.com (“Trucks barrel down Interstate 95 during the morning rush hour in this 2002 file photo. A new agreement, signed Wednesday by representatives of the US and Mexican governments, will allow cross-border trucking for the first time in 15 years – if Congress signs off.”)
Online Sources- Bloomberg, Reuters, LAHT, The Telegraph
Posted by Erwin C. at 8:15 AM No comments: Links to this post 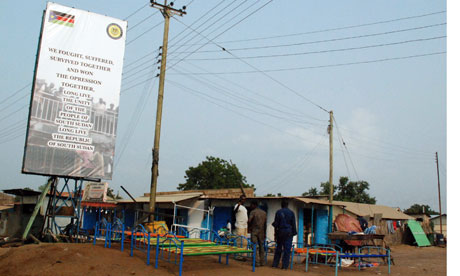 * Africa: The Republic of South Sudan, which will mark its independence on Saturday, reportedly faces plenty of challenges including internal strife and an uneasy relationship with its soon-to-be northern neighbor.

* New Zealand: The country’s civil defense supposedly cancelled a tsunami warning that was triggered by a 7.6-magnitude earthquake roughly 500 miles away of the North Island.

* Britain: According to police, editors and other execs at the News of the World tabloid masterminded the illegally hacking of cell phones of several figures including a 13-year-old murder victim. 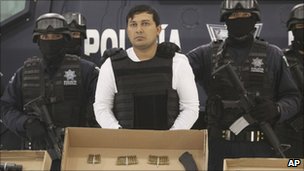 * U.S.: South American investors buying and renting out apartments in South Florida is one example of how foreign buyers are reportedly boosting the sagging housing market in some areas of the U.S.

* Bolivia: According to Bolivian officials the governments of that country and the U.S. are close to reestablishing diplomatic relations that have been broken for nearly three years.

Posted by Erwin C. at 9:30 AM No comments: Links to this post


* Venezuela: "The return has begun," decalared Venezuelan president Hugo Chavez to thousands of supporters last night hours after the ailing leader returned to his homeland.

* Colombia: Authorities claimed that they are close to capturing and possibly killing FARC guerilla chief Alfonso Cano, while at least two eyewitnesses who testified against politicos in the “para-politics” scandal were slain last week.

* U.S.: At least 125 Atlanta-area businesses were reportedly closed on Friday as part of a "day without immigrants" protest organized by a Georgia Latino rights group.

* Peru: President-elect Ollanta Humala is supposed to arrive today in Washington, D.C. where he’s scheduled to speak with U.S. officials including Secretary of State Hilary Clinton.

* Bolivia: The Andean nation pulled out of a U.N. anti-drugs convention after failing to overcome U.S. objections against relaxing global norms to legalize coca chewing.

* Mexico: The country’s political dinosaur, the Institutional Revolutionary Party, may be in the midst of a comeback after the party swept a trio of gubernatorial elections over the weekend.

According to U.S. immigration officials (via Fox News Latino) over 24,000 people are expected to become naturalized citizens between June 27 and today. Theses individuals from different parts of the world will surely feel an immense joy and pride that usually culminates a very lengthy and bureaucratic process in order to obtain citizenship.

In the following video from the Missouri-based Explore Homeland project, Argentine-born Carlos Fushimi describes what it feels like to be a U.S. citizen including the doors that have opened for him and his family: * Brazil: A pair of goals by Marta helped Brazil qualify to the quarterfinals of the Women's World Cup while the men began the Copa America with a tepid 0-0 tie against Venezuela.

* Venezuela: “Libertarian socialist” Noam Chomsky, who had one of his books become an overnight bestseller after it was publicly praised by Venezuelan president Hugo Chavez, blasted him for his “assault on democracy.”

* Chile: Fourteen of the 33 miners rescued in an operation that captured global attention last year are seeking early pension benefits.

Image – Jens Meyer/Associated Press via CBC Sports (“Marta, second from left, scored two goals and set up another by teammate Rosana, far left, in Brazil's 3-0 win over Norway on Sunday.”)
Online Sources- The Guardian, AFP, Boston.com, LAHT
Posted by Erwin C. at 9:00 AM No comments: Links to this post