* Syria: Government repression continued against protesters and opposition activists while the E.U. backed an embargo on Syrian oil exports.

* U.S.: Could another recession soon hit the already weakened and struggling U.S. economy?

* Britain: Rupert Murdoch will receive a raise even though an illegal wiretapping scandal shook his media empire.

Posted by Erwin C. at 6:30 PM No comments: Links to this post

* Brazil: Brookfield Asset Management or: How I Learned to Stop Worrying and Love the Mall.

* Guatemala: Local health authorities claimed that as many as 2500 people may’ve been infected with sexually transmitted diseases during a series of medical experiments conducted in the 1940s by U.S. researchers.

* U.S.: As part of a court settlement the Environmental Protection Agency admitted that there was discrimination against Latino schoolchildren who were exposed to toxic pesticides in California.

* Peru: The government is expected soon present a plan that would raise mining royalties in order to pay for new social programs backed by President Ollanta Humala.

Image – LAHT (Outdoor facade of the Sambil shopping mall in Caracas, Venezuela. Foreign firms like Brookfield Asset Management and the Westfield Group are behind a boom in the construction and development of shopping malls in Brazil.) 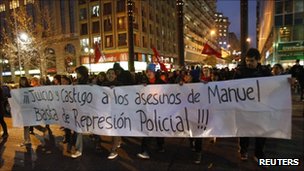 * Chile: Three months after Chilean police came under fire for using tear gas against protesters officers are again embroiled in controversy after a demonstrator was killed.

* U.S.: Spanish-language media sources are enjoying greater financial stability and growth compared to their mainstream counterparts according to the Pew Research Center.

* Colombia: Legislators approved a law that punishes people found guilty of discrimination based on areas like gender, race, sexual orientation and religion.

* U.S.: Kenneth Melson resigned from his post as chief of the Bureau of Alcohol, Tobacco, Firearms and Explosives in response to criticism over the ill-fated "Operation Fast and Furious" gun trafficking program.

* Latin America: The Economic Commission for Latin America and the Caribbean concluded that regional economic growth for this year will be slightly less than originally prognosticated.

Image – Matt York/AP via CSMonitor.com (“A cache of seized weapons is on display at a news conference in Phoenix in January. The Bureau of Alcohol, Tobacco, Firearms and Explosives is under fire over a Phoenix-based gun-trafficking investigation called 'Fast and Furious,' in which agents allowed as many as 2,500 high-powered firearms into the hands of straw purchasers in hopes of making a bigger case. Some of those weapons have turned up at crime scenes in the United States and Mexico.”)

Posted by Erwin C. at 8:00 AM No comments: Links to this post

* Asia: The Food and Agriculture Organization warned of a possible resurgence of the H5N1 avian flu virus in several Asian nations.

* South Africa: Police in Johannesburg clashed with backers of Julius Malema, the head of the African National Congress' youth wing.

* India: A court ordered the postponement of the execution of three people convicted of participating in the 1991 assassination of ex-Prime Minister Rajiv Gandhi.

Posted by Erwin C. at 5:00 PM No comments: Links to this post

Last year it was revealed that U.S. government researchers exploited thousands of Guatemalans for a series of experiments on sexually transmitted diseases in the 1940s. President Barack Obama subsequently apologized to his Guatemalan counterpart, Alvaro Colom, and ordered a bioethics panel to investigate the experiments and they revealed some of their preliminary findings yesterday. What they discovered was absolutely jaw-dropping:

Guatemala's Vice President Rafael Espada told BBC News that his country's government will extend a public apology since local doctors were involved in the gruesome procedures.

The video below via PBS News Hour from last October includes an interview with Wellesley College professor Susan Reverby who ironically uncovered documents on the Guatemalan experiments while researching the infamous Tuskegee syphilis study: 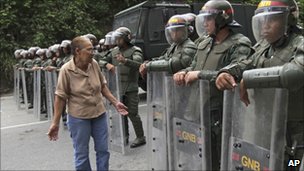 * Venezuela: Human Rights Watch urged the Venezuelan government to protect Umberto Prado, an activist who has been highly critical of the country’s prison system.

* Haiti: Political infighting and gridlock have hindered Haiti's reconstruction in the three months since President Michel Martelly was inagurated.

* Honduras: According to the country’s Human Rights Commissioner roughly 2400 women “died violently” since 2002 including twelve femicide victims whose bodies were found over the past week.

* Bolivia: Seven members of a Bolivian Mennonite community where sentenced to twenty-five years in prison after being convicted of raping over one hundred girls and women.

Posted by Erwin C. at 8:45 AM No comments: Links to this post

Today’s Video: Disappeared but not forgotten

According to the Latin American Federation of Associations for Relatives of the Detained-Disappeared (FEDEFAM) a “forced disappearance consists of a kidnapping, carried out by agents of the State or organized groups of private individuals who act with State support or tolerance, in which the victim ‘disappears’.” The plights of these victims and the pain their families face will be remembered on the annual International Day of the Disappeared, which is this Tuesday.

Latin America has had a sordid history with disappearances such as the victims under the former authoritarian military regimes in countries like Argentina, Chile and Uruguay. Yet the unfortunate issue of the disappeared continues to manifest itself in the Americas. Yesterday approximately one hundred protesters in the Mexican state of Coahuila urged authorities to do more in resolving the over 200 disappearance cases since 2008. Last month roughly 600 people including the families of dozens of disappeared Central American migrants marched from Mexico’s southern border to Mexico City.

According to the International Red Cross (IRC) governments throughout the region to either prevent or solve disappearances have not done enough. As Guilhem Ravier, collaborator for the IRC’s on the disappeared in Colombia, said to EFE:

“The magnitude of this problem is huge. There is no other way to describe it. We don’t even know exactly how many people have disappeared but we think it’s a lot. There are many families who, throughout the recent decades of armed conflict, wait for news about their loved ones and suffer in the uncertainty of not knowing.”

One of the most notable instances of a disappearance in the Americas is the case of Argentine teen Luciano Arruga. His whereabouts are unknown since January 31, 2009 when Buenos Aires police intercepted him. Several eyewitnesses have come forward and claimed that they saw him being harassed and beaten at a police station. There are too many questions that have been unanswered in the over thirty months that Arruga has gone missing though he continues to be remembered by friends and family as seen in the following video from last January:

Posted by Erwin C. at 4:00 PM No comments: Links to this post 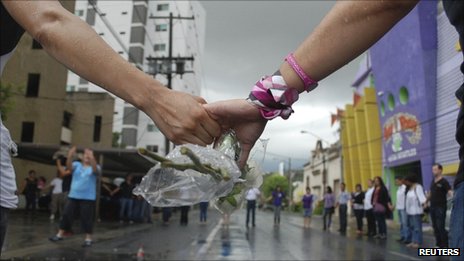 * Mexico: Over 1000 demonstrators took to the streets of Monterrey to denounce political leaders in the aftermath of last week's deadly arson attack. (Update: Authorities arrested five suspects linked to the attack and claimed that they are supposedly linked to the Zetas drug gang.)

* Puerto Rico: Local Sen. Roberto Arango quit from his post after sexually explicit photos supposedly of him appeared on "an iPhone application for gays and bisexuals."

* Guatemala: Increasing violence and how to combat organized crime were two of the main topics discussed at last week's debate between Guatemala's three leading presidential candidates.

Image Source - Reuters via BBC News ("Casino staff who survived gathered a day after the attack to pray for those who died." At least 52 people died in the incident last week that authorities blamed on drug gangs.)
Online Sources - CNN, PRESS TV, MSNBC, Boston.com

Posted by Erwin C. at 8:00 AM No comments: Links to this post