Is a film production company acting responsibly against an alleged hacker or unfairly harassing and bullying an innocent movie fan? That is the question that has yet to be resolved in the case of Daiana Santia, a 24-year-old Argentinian fan of the "Twilight" movie series.

On Monday, Summit Entertainment filed a lawsuit that accused Santia of illegally downloading and distributing via social networks several images from the yet-to-be released installment of the "Twilight" series. Santia subsequently called a news conference on Thursday (as you can see in the video below) where she denied allegations that she hacked into Summit's servers. "I couldn't do it again even if I wanted to. You enter by navigating, entering by different links. I only saw it, I didn't distribute it like they say," said Santia.

The attorney for the 24-year-old economics student also alleged that Summit tried to confiscate her computer "in a bad manner."

Summit issued a press release hours after Santia spoke to reporters from her hometown of Posadas. The company denied "bullying" her and instead insisted that "it is about stolen material that is private and sensitive which was obtained by illegally accessing private/secure servers as well as personal email accounts."

Several actors from the highly-profitable "Twilight" films have spoken out on the issue and unsuprisingly haven't bit the hand that's fed them:

(Robert) Pattinson and the other Twilight stars have expressed their annoyance at the leak, with R-Patz telling MTV: 'I want the Twilight troops to mobilise, all the good fans, and find out who these little sh**s are and just hack into their computers and destroy them. ... I'm being genuinely serious.'

It remains to be seen if Summit releases other names in their lawsuit. In short, a dramatic situation could get very ugly very soon. 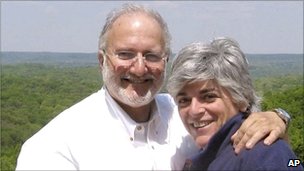 * Caribbean: At least four people were killed on the island of Hispaniola as a result of Tropical Storm Emily.

* Venezuela: Over 2000 inmates were freed in an attempt to relive overcrowding in Venezuelan prisons.

Image – AP via BBC News (Supporters of Alan Gross, seen here in a photo with his wife before being detained in Cuba, claim that his imprisonment is unjust and an example of the government’s poor human rights record).
Online Sources- Reuters, TVNZ, Montreal Gazette, New York Times
Posted by Erwin C. at 10:00 AM No comments: Links to this post

Today’s Video: Flowers in the sand

Before getting to tonight's video there are a few blog matters that need to be discussed:

1 - We're going on a brief hiatus on Friday; hence, there will be no new posts on that day.

3 - Hopefully starting on Monday we'll try to resume our old schedule of publishing 4-6 posts every weekday including different features on areas like music and film.

With that said, the following video via NTN24 English shows a poignant and powerful anti-violence protest that took place in Rio de Janeiro, Brazil this week:

* Latin America: Rest in peace Baruj Benacerraf; the Venezuela-born immunologist who was a co-recipient of the 1980 Nobel Prize in Physiology or Medicine died this week.

* Panama: Ex-strongman Manuel Noriega will reportedly be extradited from France to Panama where he’s expected to serve a twenty-year prison sentence.

* Costa Rica: The country’s ban on in-vitro fertilization could be lifted after a legal challenge was filed with the Inter-American Court of Human Rights.

Image – AP via ABC News (“This undated photo released by Dana-Farber Cancer Institute shows Dr. Baruj Benacerraf, a Venezuela-born immunologist who shared the 1980 Nobel Prize in Physiology or Medicine and served as president of the Boston-based Dana-Farber Cancer Institute.”)
Online Sources- Bloomberg, MSNBC, AFP, Hispanically Speaking News, The Scientist, BBC News
Posted by Erwin C. at 11:00 AM No comments: Links to this post

* Guatemala: A court sentenced four men to prison sentences of over 6000 years per person as punishment for participating in the Dos Erres massacre of 201 people in 1982.

* Mexico: According to the central bank remittances the amount of remittances sent to Mexico in the first six months of this year increased by 4.7% compared to the same period in 2010.

* Caribbean: Tropical Storm Emily is expected to roll through the Dominican Republic and Haiti later today.

* Colombia: A U.S. federal judge refused to dismiss the charges against an arms dealer accused of selling weapons to Colombia’s FARC guerillas.

* Cuba: The country’s National Assembly backed a series of economic changes including the possible shedding of up to one million public jobs.

Image – Reuters (“A woman reacts after hearing the sentence of four former soldiers convicted of war crimes at the Supreme Court in Guatemala City, August 2, 2011.”)
Online Sources- Fox News Latino, Reuters, CTV.ca, BBC News, The Guardian, Bloomberg
Posted by Erwin C. at 9:00 AM No comments: Links to this post

* Mexico: Twenty-one federal prosecutors resigned en masse in an action that may be connected to an internal purge by the Attorney General’s office.

* Haiti: Several dozen protesters upset with the lack of housing for earthquake survivors blocked access on one of Port-au-Prince's busiest streets.

* Caribbean: The U.S. Coast Guard recovered roughly 7.5 tons of cocaine from a sinking narco-submarine in the Caribbean.

Image – Reuters (“An oil pump is seen on the shore near Santa Cruz del Norte, Cuba June 5, 2008.”)
Online Sources- UPI, MSNBC, The Guardian, GlobalPost, Sacramento Bee, CBS News
Posted by Erwin C. at 8:30 AM No comments: Links to this post

* Syria: Western powers are increasing the pressure on the Syrian government in response to a deadly crackdown against political protesters.

* Africa: The U.N.’s chief of humanitarian relief warned that more African countries could be hit hard by a famine that originated in Somalia.

* U.S.: Congress is racing against the clock in order to avoid what would be an embarrassing government default on payments.

Today’s Video: Taxis for all

Last week we briefly examined the difficulties faced by people with disabilities (PWD) in Latin America. We noted that "some progress" has been made in the region in order to promote the rights of PWD and help grant them much deserved social and economic equality.

Despite the positive changes to the taxi system in the megalopolis practically nothing has been done to accommodate PWD. None of the more than 250,000 registered cabs could be considered wheelchair accessible though that changed last month. Heriberto Gómez Pérez became the first Mexico City taxi driver with a fully accessible vehicle, a minivan with a hydraulic wheelchair lift. According to the website for El Universal, Gomez spent over 200,000 pesos (over USD $17,000) in order to modify his vehicle.

"I hope (Mexico City mayor Marcelo) Ebard noitces this and pays attention too a segment of the population...that want to be treated with dignity and well-being with their transportation," said Gomez. Hopefully Gomez' initiative will be example for the integration of accessible taxis not only in Mexico but for other major cities of the world.

* Mexico: The number of Mexicans living in poverty grew in 2010 according to a recently released report while the country’s seasonally adjusted unemployment rate in June reached its highest point in nearly two years.