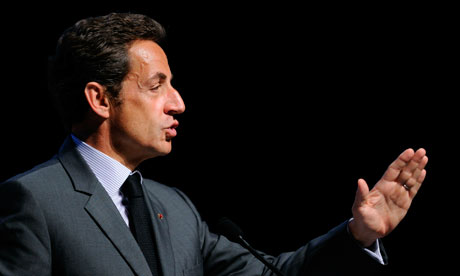 * France: Is president Nicolas Sarkozy’s crackdown on certain immigrant communities a necessary anti-crime measure or, as this Foreign Policy article implies, a sign of upcoming “repression and retrenchment”?

* Middle East: In a tit-for-tat move Israel launched air strikes against Gaza after a rocket was launched into a coastal Israeli city.

* Britain: The incoming CEO of BP, Bob Dudley, claimed that the clean up efforts in the Gulf of Mexico may need to be “scaled back” despite serious damage from a major oil spill.

* Africa: A trio of Kenyans has been accused of being behind the deaths of 76 people killed by a bomb in Uganda.

Image – The Guardian (“Nicolas Sarkozy has been criticized over plans to clamp down on Traveller, Gypsy and Roma populations.”)
Online Sources- Foreign Policy, MSNBC, BBC News, The Guardian
Posted by Erwin C. at 8:00 PM No comments: Links to this post

It’s been an off week for me in terms of blogging and I sincerely apologize for what appears like my lazing about on this website. Hopefully things can return to normal next week and have a full slate of posts on areas like the U.S. immigration debate and regional political conflicts.

This week the Trinity Square shopping mall and parking garage in Northeast England will be torn down. The complex- best known for its depiction in the 1970 British cult film “Get Carter”- was built in the Brutalism architectural style. Brutalism was trendy in the 1960s and 1970s, and buildings such as Trinity Square are defined by its angular and blocky shapes in addition to “the exposure of the building's functions…in the exterior of the building.” The style has since fallen out of favor in most architectural circles.

One of Argentina’s foremost architects was famous for promoting the Brutalism movement in his native country. Clorindo Testa was the artist behind numerous several well-known buildings in Argentina such as the headquarters in Buenos Aires for Bank of London and South America (today the National Mortgage Bank). Built in 1959, the “resulting design of Testa's bank is a box within a box” that incorporates glass more than typical Brutalism structures of the era.

Below is part of a video interview with Testa where he discussed his creativity behind some of Argentina’s well-known modern structures:

* Latin America: According to German researchers marsupials such as kangaroos and koalas may have descended from a “common ancestor” in the Americas.

* Costa Rica: President Laura Chinchilla State Department vowed not to reverse a decree allowing an open-pit gold mine to operate near the border with Nicaragua.

Image – The Telegraph
Online Sources- BBC News, The Latin Americanist, MSNBC, BusinessWeek
Posted by Erwin C. at 8:00 AM No comments: Links to this post

World Watch: No bull? No bull!

* Spain: Catalonia became the first mainland Spanish region to ban bullfighting in a decision seen by some as a “political statement” of local independence.

* Pakistan: At least 100 people died and thousands were left homeless as a result of monsoons and heavy flooding.

* Afghanistan: Pentagon officials were none too pleased over the publishing of secret files on the Afghanistan conflict by the Wikileaks website.

* Ecuador: UNESCO removed the Galapagos Islands from its list of endangered sites after citing “strong action” by the Ecuadorian government to fix environmental problems.

* Colombia: The State Department reversed its previous decision and will grant Colombian journalist Hollman Morris a visa to come to the U.S.

Image – The Telegraph (“Marine iguanas are unique to the Galapagos.”)
Online Sources- Boston Globe, LAHT, MSNBC, Miami Herald
Posted by Erwin C. at 8:00 AM No comments: Links to this post

"Gentlemen prefer them dumb." It's the title of a Colombian telenovela, a less famous book, and if you like generalizations based on academic sociological surveys, it's apparently true.
According to a study from the Harvard Kennedy School of Government reported on by BBC Mundo, educated women in Latin America are less likely to marry than their less educated counterparts.
The report, titled “‛Schooling Can’t Buy Me Love’: Marriage, Work, and the Gender Education Gap in Latin America,” also shows that educated women (those having a secondary education or higher) were also more likely, when they did marry, to marry less educated men. 40% of Colombian and Brazilian educated women fell into this category, compared to 16% of American women.
From the study: 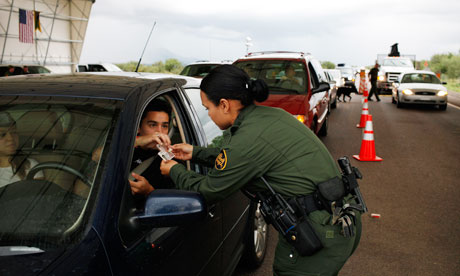 Update (9:15pm): For the last word on Wednesday's court decision on SB 1070 here are a few reactions:
Update (4:15pm): Of the seven lawsuits filed against SB 1070 Judge Bolton's decision focused primarily on the one presented by the Department of Justice (DOJ). Interestingly the DOJ's case did not challenge some of the law's provisions according to the Arizona Daily Star's website:

• Making it a crime to stop a vehicle in traffic to hire a day laborer or for someone looking for work to get into a stopped vehicle;

• Requiring state officials to work with the federal government regarding illegal immigrants;

• Allowing Arizona residents to file suit against any agency, official, city or county for adopting policies that restrict the ability of workers to enforce federal immigration law "to less than the full extent permitted by federal law.

Meanwhile several local politicos have already reacted to the judge's decision; Gov. Jan Brewer said that she will appeal yet admitted that she was "heartened by some findings" in Bolton's ruling. On the other hand, state Attorney General Terry Goddard criticized the bill and urged repairing "the damage to Arizona's image and economy."

Update (3:30pm): So what did Judge Bolton place a preliminary injunction on? In a nutshell here's the answer according to The Guardian:

Update (2:45pm): A few quick points based on Judge Bolton's decision (which you can read in its entirety here):
Original Post: In a piece of breaking news, Judge Susan Bolton blocked parts of a strong anti-immigration law set to go into in effect in Arizona this Thursday at midnight. The law will reportedly still take in effect tonight without certain portions declared illegal by the justice according to the AP:

The law will still take effect Thursday, but without many of the provisions that angered opponents — including sections that required officers to check a person's immigration status while enforcing other laws. The judge also put on hold a part of the law that required immigrants to carry their papers at all times, and made it illegal for undocumented workers to solicit employment in public places.

The ruling apparently agreed with the basic points presented by the Department of Justice's lawsuit but also did not back their call for a permanent injunction of the entire law. Furthermore, the judge's decision is not expected to calm the high political tension over immigration that has centered in Arizona.

We'll have more later today on the details and fallout from Judge Bolton's ruling.

Online Sources - Too many to list
Image - The Guardian (A Border Patrol agent checks the ID of a driver trying to cross one of the U.S. borders.)
Posted by Erwin C. at 1:45 PM 1 comment: Links to this post

* Nicaragua: Pressure from several universities and student organizations apparently led to the decision by Nike to pay over $1.5 million to a relief fund for laid off Honduran laborers.

* Cuba: Coming to a bookshelf near you – the memoirs of former Cuban ruler Fidel Castro.

* Ecuador: The government will reportedly introduce a series of reforms designed to increase state control over the country’s oil industry.

Image – Time
Online Sources- Reuters Canada, CNN, AFP, The Nation
Posted by Erwin C. at 8:00 AM No comments: Links to this post

Decision day came, and Maradona is out as Argentina's soccer coach.
The enigmatic coach and national icon was not asked to continue to lead the Argentine side after they crashed out of the World Cup with a 4-0 drubbing at the hands of Germany.
Initially the Argentina Football Association (AFA) had signaled a willingness to keep Maradona on to lead the team into 2014 Brazil, but it appears the famously strong-headed coach decided it was his way or nothing, and refused to allow any changes to his assistant coaching staff.
According to ESPN Soccernet:

"The president said that there was a significant difference between what AFA wanted to achieve and Maradona's aspirations for the future," (AFA spokesperson Ernesto) Cherquis Bialo said. "There was a wide gap, and it was impossible to narrow it."

Despite some shows of brilliance during the Cup's early games, Argentina showed significant backside weakness against the German attack, and the end result for a nation so hungry for glory was bound to leave some heads rolling in the post-Cup aftermath.
But it may have been Maradona's own stubbornness that led to his undoing. He was unresponsive to initial calls from AFA president Julio Grondona, and delayed their post-Cup meeting to go to Venezuela to meet with Hugo Chavez (and lend his two cents to the Venezuela-Colombia brush up). No doubt that didn't win him any fans.
The Soccernet article quotes team trainer Fernando Signorini as saying "I have no doubt they didn't want him. Maradona is like a stone in the shoe of power."
Perhaps a stint leading the Venezuelan national side awaits.
Image Source: Sydney Morning Herald
Online Sources: ESPN Soccernet, Sydney Morning Herald, Latin American Herald Tribune, Xinhua
Posted by Ben G. at 1:11 AM No comments: Links to this post

Narcocorridos, or drug ballads, are a "controversial folk-music genre" popular in parts of Mexico as well as Colombia. An offshoot of this genre that has gained increasing attention is called narco-rap and as one of artist told CNN their music resonates with fans in high-violence areas:

Cano and Blunt's first hit, "Reynosa Maldosa" (roughly translated as Reynosa the Bad Town) charted the growing levels of drug-related violence in this city of 500,000.

"Reynosa the bad town. A s***-load of bad guys, full of mafiosos. The streets are dangerous," it goes. And it's instantly catchy.

"We just sing about what we see in the streets. People identify with these songs because they listen to us and see for themselves what's going on. That's the reality," Cano said.

One of the groups in the emerging narco-rap scene is a trio known as El Cartel de Santa whose songs have been influenced by hip-hop from north of the border according to one of their members in a recent interview. Indeed, their latest album includes an English-language song, "Mobster Paradise", which you can listen to and gain an insight into the narco-rap world: 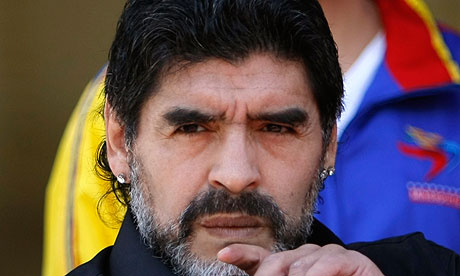 * Argentina: Tuesday is the decision day for Diego Maradona, as Argentina’s soccer federation will decide if he’ll stay on as head coach of the men’s national team.

Today's Video: There is a light that never goes out

Monday marks the twentieth anniversary of the Americans with Disabilities Act, a landmark law that had helped promote the rights of disabled individuals throughout the U.S. Despite the many accomplishments that this law helped facilitate since 1990, there is much more that can still be done. The same can be also be said for people with disabilities throughout the Americas where the difficulties have been many and their potential has been stunted.

The video clip below comes from "Além da Luz" ("Beyond the Light"), a documentary focusing on the lives of four blind and visually impaired Brazilians. Their story is one of empowerment, independence, and the desire to move forward with their lives despite their disability":

* Honduras: A judge dismissed two charges against ousted president Manuel Zelaya though other accusations are still pending against him.

* Peru: A state of emergency was declared in Peru due to a harsh cold front that has swept through several Latin American countries.

* Caribbean: Agreements in areas such as immigration were signed during Dominican President Leonel Fernandez’ visit to Cuba last week.

Image – The Telegraph (Manuel Zelaya was ousted from the Honduran presidency over a year ago and he is currently in exile).
Online Sources- MSNBC, BBC News, CTV, People’s Daily Online
Posted by Erwin C. at 8:00 AM No comments: Links to this post