*Haitian gangs received an ultimatum from the government: surrender or be killed.

*Higher demand for Latin American, African, and Asian priests at the raises probability of the next pope being from outside .

*Latin American and Euro scientists are working on a new way of predicting volcanic eruptions.

*Brazilian bank Itaú moves into and after buying assets from Bank of America.

*Cuban officials are angered over a court ruling that denied an appeal by 5 Cubans convicted of espionage.

(Images via these two websites).

U.S. travel restrictions from Cuba to be eased

On the heels of Fidel Castro’s transfer of power, the government will loosen travel restrictions from that would make it easier to obtain visas. However, officials claim that the changes will come about due to months of “internal administration discussions,” not recent changes in . (Link via Hispanic Tips). 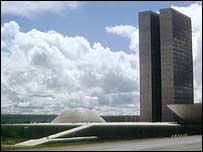 72 Brazilian legislators may be expelled from congress as a result of a major bribe scandal. Only 2 of the congressmen are from the ruling Workers’ Party though 63 of them are from political factions sympathetic to President Luiz Inacio Lula da Silva.

Meanwhile, an opinion poll yesterday showed Lula has doubled his lead over his nearest rival and stands a clearer chance of winning in the first round of elections on October 1st. (Image via BBC).

An earthquake measured at 5.9 on the Richter scale hit central and western earlier today. There have been no major reports of damage or death though the tremor did startle residents of and even forced the quick evacuation from tall buildings.

Mexico, earthquake
Posted by Erwin C. at 11:52 AM No comments:

Here are some recent posts from around the blogosphere for your reading enjoyment:

*Tim’s Blog looks into the difficulties of measuring poverty in .

*Survey by the shows Latino support has slipped for both the Democratic and Republican parties.

*Via the very informative Global Voices: highlights from Panamanian blogs.

*How can gain attention to its growing economy? By re-branding its image.

*Will an expansion of the help the country’s economy and attract foriegn investment or sink it into massive debt and preserve social inequality? The Council on Hemispheric Affairs investigates.

*’s first musical, based on that country’s version of “American Idol”, is on pace to becoming the country’s highest grossing local film.

*A look back at a set of cards from 1989 that described “Friendly Dictators” well-known for the human rights abuses including ’s Jorge Videla and ’s Alfredo Stroessner.

*’s president set the Election Day for president at August 28. In the meantime, it’s never too early to speculate on a presidential election that will take place in 3 years.

*One less challenger Hugo Chavez has to worry about: Teodoro Petkoff dropped out of the race for president over the weekend.

*Lastly, there are several music blogs that highlight the best in Latin American and world music. From a personal standpoint, I highly recommend all of these music blogs for their variety and knowledge in music:

-Búscate un novio may be off for the summer, but it is a great blog on rock from around the world.

-Motel de Moka tends to group their entries according to mood or genre rather than artist. This lends itself to compiling contributions from many different musicians.

-zonaindie specializes in different indie musicians from . Most of them you may not have heard of but they are still of great quality.

With that I leave you until the next post sometime on Friday. Take care everyone! * recalled its ambassador to as the Venezuelan government increases its rhetoric against ’s attacks of .

*Cuba's government is busy telling others that the government is stable and that Fidel is fine even though he has yet to be seen in weeks.

*Occidental Petroleum’s quarterly profit fell partly due to actions in .

*Young artists from are rapidly getting attention from the art world. (Such as the image on the right, a painting by Sergio Porro).

Latin America
Posted by Erwin C. at 10:52 AM No comments:

*Colombian president Alvaro Uribe was inaugurated for a second term and promised to continue his hard-line stance against leftist guerillas and to devote more energy to social issues.

*Here’s a thought: is Hugo Chavez the next Fidel Castro?

*Gang violence in has put Brazilian police on high alert.

*’s government is interested in claiming the through diplomatic means, yet the British government refuses any talks of ceding the islands.

*After weeks of failed negotiations miners at ’s Escondida mine walked off the job and are striking.

* imposes sanctions against as payback for arms deal with .

Latin America
Posted by Erwin C. at 8:05 PM No comments:

Good day everybody. For the next few days there will fewer posts by me since I will be very busy sorting out some personal issues. (At the very least I'll post evening headlines). Sorry for the incovenience.

In the meantime please feel free to check our page on other blogs and websites on Latin America as well as the Latin American Network Information Center's "Newspapers in Latin America" website.
Posted by Erwin C. at 1:57 PM No comments:

*Cuban dictator Fidel Castro temporarily relinquishes power to his brother, Raul, as the Cuban media reports that Fidel underwent intestinal surgery. Cuban exiles take to the streets in to celebrate while pundits examine how the will react as well as what could be expected under Raul Castro’s regime.

*The Associated Press reports that ’s government retracted a plan to remove religion classes from schools.

*Newly elected Peruvian president Alan Garcia said that all government salaries will be cut even though his salary would still be the highest for a Latin American head of stae.

*The U.S. Navy awarded Boeing with a contract to build and sell missiles to 5 countries including .

*Fifteen army troops were killed in an ambush as leftist guerillas escalate their attacks in the week heading up to Colombian president Alvaro Uribe's 2nd inauguration.

*Leaders from around reacted in distinct ways to Fidel Castro’s sickness and transfer of power.

*Fidel Castro claims that his health is “stable” according to a statement allegedly written by him and read on Cuban television.

*Senior members of ’s anti-drug police have been touring on an advisory mission.

*’s highest court ruled in favor of a mentally disabled rape victim who wanted to undergo an abortion.

*Testimony today from the Government Accountability Office showed undercover agents were able to cross the borders with and using false documents.

* ordered its diplomatic envoy to to return home.

*An ex-policeman was sentenced to 25 years in jail in the first verdict handed down for human rights abuses during ’s military dictatorship.

*U.N. Secretary-General Kofi Annan arrived in the after spending one day visiting government officials in .

*’s constitutional assembly opened on Sunday and has a year to formulate a new constitution for the country.

*’s vice president says that Fidel Castro may be healthy enough to return to power in a few weeks.

Latin America, week in review
Posted by Erwin C. at 10:13 PM No comments: