* Central America: Officials in Honduras and Guatemala are closely monitoring the progress of Tropical Storm Harvey, which reached the coast of Belize earlier today.

* Latin America: The Venezuelan and Cuban governments blasted a U.S. State Department placing them on a blacklist of state-sponsored terrorism.

* Chile: The government officially recognized 9800 more victims of the dictatorship of the late strongman Augusto Pinochet.

* Nicaragua: The country’s Roman Catholic archdiocese is butting heads with President Daniel Ortega’s use of spiritual rhetoric during his reelection campaign.

* Argentina: As part of a new and “ambitious” antidrug program the state is expected to increase spending on defense.

* Cuba: A spokesperson for the Ladies in White dissident group claimed that government supporters recently harassed and assaulted them in Havana.

We will hopefully be back over the weekend to discuss several stories we missed from the past week. (Possible topics may include the right to life debate in Argentina and the health of Chilean students on a hunger strike).

Yesterday the Department of Homeland Security issued a directive calling for a case-by-case review of the deportation proceedings of undocumented immigrants that have had no prior criminal record. Several news reports claimed that the measure could affect as many as 300,000 potential deportees but what sort of impact does the move have on immigration policy? Katherine Vargas of the National Immigration Forum explains in this video via Univision: 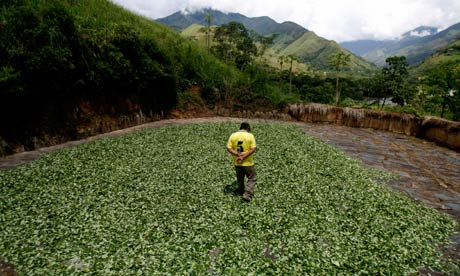 * Peru: A statement from the U.S. State Department said that the agency doesn’t feel that “the temporary suspension of (Peruvian coca) eradication this week represents a permanent shift in the government's counternarcotics policy.”

* Brazil: Spanish fashion chain Zara was accused by Brazilian authorities of the mistreatment and exploitation of workers in a Sao Paulo facility.

* U.S.: An ex-Salvadoran army colonel accused of being involved in the 1989 murders of six Jesuit priests was found living in impunity in Massachusetts.

* Venezuela: After months of legal wrangling the family members of the late President Carlos Andres Perez reportedly reached a deal that would permit him to be buried in Venezuela.

Image – Mariana Bazo/Reuters via The Guardian (“A coca farmer in Tingo María, Peru.” According to The Guardian, Peru’s prime minister claimed, “the government was committed to reducing the illegal crop and would convene a special panel next month to chart a strategy that would stress alternative development, ‘social inclusion and fighting poverty’.”)
Online Sources- AFP, The Guardian, UPI, Reuters

Posted by Erwin C. at 8:30 AM No comments: Links to this post

* Latin America: Numerous top Israeli diplomats have allegedly traveled to several Latin American countries in order to discourage support for the creation of a Palestinian state.

* Central America: Diplomatic tensions between neighbors Costa Rica and Nicaragua over Calero Island could be reignited due to rumors of a recent incursion into the disputed territory.

* Brazil: According to a “preliminary analysis of satellite photos” deforestation in the Brazilian Amazon increased by 15% between July 2010 and July of this year.

Image – Reuters (“Israel’s Foreign Minister Avigdor Lieberman speaks to the media before the weekly cabinet meeting in Jerusalem July 17, 2011.” Lieberman was one of numerous top Israeli diplomats that have reportedly traveled recently to Latin America in order to drum up opposition to Palestinian statehood).
Online Sources- insidecostarica.com, The Latin Americanist, AFP, CNN

Posted by Erwin C. at 7:30 AM No comments: Links to this post 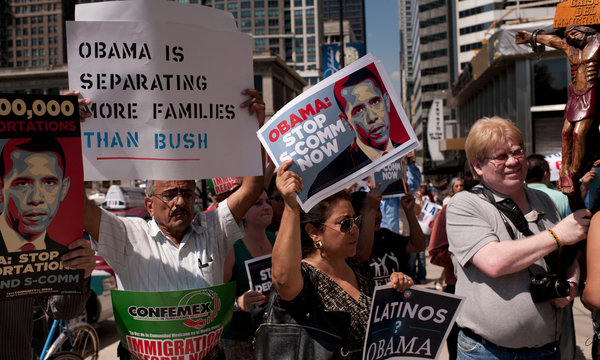 * U.S.: A few hundred demonstrators including Latino activists protested in several cities throughout the country against the Obama administration’s immigration policy.

* Brazil: President Dilma Rousseff may not be as keen as her predecessor was on arms purchases but that hasn’t stopped international firms like Boeing and Saab from attempting to land a multibillion-dollar fighter jet contract.

* Puerto Rico: Could Puerto Rican residents soon be allowed the right to vote in federal elections?

Image – New York Times (“In Chicago on Tuesday, a protest against policies leading to deportations.” Demonstrators criticized the current immigration policy including the increased number of deportations as well as problems with the Secure Communities program).
Online Sources- Reuters, AHN, UPI, Bloomberg

It has been roughly twenty years since civil war tore El Salvador apart. Nowadays another threat is hurting the Central American country: violent street gangs that have reportedly been the target of recruitment by some of Mexico's powerful drug groups. The following Not Safe for Work video via Al Jazeera English delves into the topic:

Video Source - Al Jazeera English
Posted by Erwin C. at 10:00 AM No comments: Links to this post 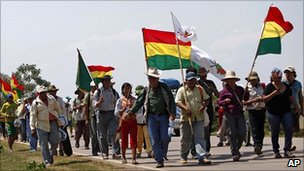 * Bolivia: Over 500 mostly indigenous demonstrators protesting the construction of a highway through the rainforest are marching over 300 miles to La Paz.

* Venezuela: The Venezuelan economy may have its problems but it seems like that hasn’t affected the considerable growth in the country’s stock market this year.

* Cuba: Newly declassified documents showed that several U.S. planes were downed by friendly fire during the failed Bay of Pigs invasion of Cuba in 1961.

* U.S.: According to a impreMedia and Latino Decisions poll nearly half of Latino respondents believed that raising taxes on the wealthy is the “only way” to solve the budget crisis. 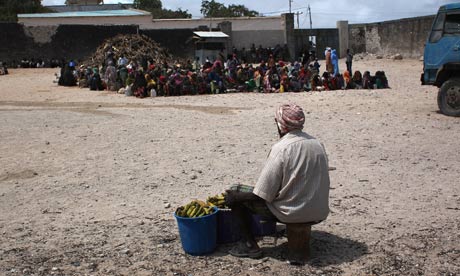 * Germany: On the fiftieth anniversary of the construction of the Berlin Wall a minute of silence was observed to pay respect to those who died while trying to cross the barrier.

* Iraq: At least 74 people died as the result of a series of bombings in thirteen Iraqi cities.

* China: A Buddhist monk called for the return of the Dalai Lama to Tibet by setting himself on fire.

Posted by Erwin C. at 5:00 PM No comments: Links to this post

Imagine the public reaction in the U.S. if Jon Stewart or Stephen Colbert were to be gunned down in cold blood. Now picture that in the subsequent years impunity surrounds the murder and investigations into the crime have yielded few results. Such is the case of Jaime Garzon, Colombia’s top political humorist who was assassinated just over twelve years ago.

Garzon was best known for his sharp satire against the Colombian political establishment in TV programs such as “Zoociedad” and "Quac, El Noticiero". (In this clip, for instance, Garzon pokes fun at then-Governor and eventual president Alvaro Uribe as “the dictator Colombia needs!”) His most famous character was Heriberto de la Calle (roughly translated as “Heriberto of the streets”), a shoeshine man who grilled celebrities and political leaders. (In this clip, Heriberto asks ex-U.S. Ambassador to Colombia Myles Frechette if it’s true that the U.S. “doesn’t pursue guerillas since the rebels send cocaine to the U.S. and they receive arms in return?”)

Aside from his humor, Garzon was also a lawyer and peace activist who involved himself in the liberating of hostages from the FARC as well as the failed peace negotiations with the rebels. Paramilitary leaders allegedly viewed him not as an intermediary but instead as a guerilla collaborator and he reportedly received death threats from them. It’s believed that paramilitary chief Carlos Castaño ordered Garzon to be killed, a tragedy that would occur in Bogota on August 13, 1999.

In 2000, Castaño was convicted in absentia of the murder of Garzon and sentenced to 38 years in prison. The purported mastermind behind the assassination never spent a day behind bars for his crime and he himself would be killed under mysterious circumstances in 2004.

After years of weak investigations in Colombia, Garzon’s family last week sought the intervention of the Inter-American Court of Human Rights. In the meantime, one cannot help but wonder how Garzon would’ve skewered the Colombian political landscape of the past few years and if the country is still without a “national identity” as he jokingly refers to in this 1993 interview:

Posted by Erwin C. at 3:00 PM No comments: Links to this post 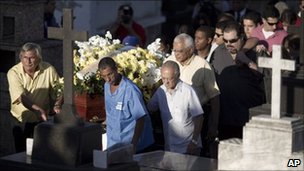 * Venezuela: President Hugo Chavez returned from Cuba on Saturday after undergoing second round of radiation treatment and chemotherapy.

* U.S.: According to the California attorney general’s office the number of official hate crimes against Latinos in that state jumped by nearly 50% last year in comparison to 2009.

Posted by Erwin C. at 7:00 AM No comments: Links to this post