*Suspect in the murders of hundreds of women in Juarez, Mexico arrested.

*Ancient Peruvian headdress found in after being stolen in 1988. (Image via National Geographic).

With the 16th International AIDS Conference in drawing to a close, statistics have shown a notable discrepancy on AIDS treatment and infection in different regions of the world. For instance, AIDS infection among gays has grown substantially including “consistent condom use of men who have sex with men in was 30%,” and malnutrition continues to hurt people with AIDS in lesser developed countries. Innovative tools for AIDS prevention may take far too long to reach underdevloped states due to lack of funds and political debating, while human rights advocates claimed that mandatory testing in health care facilities located in Latin America has created a stigma for those that take the tests. (Image via the World Bank).

Chilean miners striking at the worlds largest mine (image via Reuters) has forced its shut down as they blocked access roads to the Escondida mine. In the meantime, workers at ’s Volkswagen plant in Puebla voted to strike due to an insufficient pay increase.

Chile, Mexico, labor relations
Posted by Erwin C. at 2:03 PM No comments: Links to this post

Homeland Security head Michael Chertoff claimed that the presence of Nation Guard troops along the U.S.-Mexico border has helped decrease the number of illegal crossings nearly 50%. Meanwhile, several Border patrol agents said that some areas along the border were “short-handed” since they were assigned away from their usual posts in order to help National Guard troops.

immigration, United States
Posted by Erwin C. at 12:48 PM No comments: Links to this post

The photograph seen above (via National Geographic) is of Tungurahua, a volcano in Ecuador that has wiped out several villages and may have killed dozens of people. According to a leading volcanologist "we cannot rule out more explosions."

*A volcanic eruption in Ecuador has destroyed three villages and killed one person with over sixty reported missing.

*Support for the ruling party in has fallen by 14% since March leading to added pressure for early elections to be held later this year.

*A thorough analysis of Hugo Chavez’ recent world tour, via a report from the Council on Foreign Relations.

(Image of one of the surviving Mexican fisherman via The Sydney Morning Herald).

Rapper Timbaland will produce a biographical film on slain drug lord Pablo Escobar (image via ZDF), claiming that it will be a bigger hit than the 1983 version of “Scarface”. In the meantime, the Colombian government plans to convert Escobar’s lavish ranch, Hacienda Napoles, into a tourist destination including a theme park. 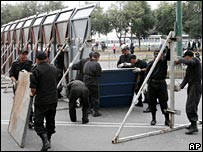 ’s top electoral tribunal confirmed July’s legislative elections with the ruling PAN having a plurality, but no a majority in both houses. Meanwhile, police set up fortified security around congress including riot police and water cannons. (Image via BBC).

international politics, Mexico
Posted by Erwin C. at 3:10 PM No comments: Links to this post

Brazilian squad Internacional (image, via Sports Illustrated) won South America’s premier soccer club tournament last night over defending champions . The side won the title via an aggregate score of 4-3 and thus earned the first international title in the club’s near century of existence.

soccer, Brazil
Posted by Erwin C. at 1:14 PM No comments: Links to this post

The lack of any clear favorite amongst the candidates for president in has led some analysts to forecast a possible “political crisis” in the near future. No candidate has more than 25% popularity as “there is not a single candidate that awakens enthusiasm among voters” ahead of Election Day on October 15th, according to one pollster. (Image, the map of , via the U.N.)

international politics, Ecuador, election
Posted by Erwin C. at 12:39 PM No comments: Links to this post

*Mexican drug lord arrested hiding in a boat off the coast of Mexico.

*Several Colombian paramilitary members were arrested after being accused of violating demobilization agreement.

* to move their embassy in Israel from to Tel Aviv.

*There’s a new set of the “disappeared”- victims of ’s right-wing paramilitary groups.

*Joint intelligence center established by , , and .

Latin America
Posted by Erwin C. at 8:24 AM No comments: Links to this post

*Fidel Castro’s death could be disastrous for the Democratic and Republican parties, according to a commentator at the Guardian UK.

*President Vicente Fox says that will have its first budget surplus in 13 years.

*Apparently, columnist Andres Oppenheimer can see into the future.

*’s president was a no-show at a presidential debate.

*Increased DEA presence in highlights growing influence of the drug trade in that country.

Latin America
Posted by Erwin C. at 6:23 PM No comments: Links to this post

international politics, Mexico
Posted by Erwin C. at 3:42 PM No comments: Links to this post

Brazilian television Globo will start filming a telenovela this month that is set in the Amazon rain forest and will emphasize the need for its preservation. The telenovela, entitled “Amazonia” will show the rise of the Brazilian state of during the early 20th century as rubber capital of the world and its subsequent downfall and abandonment by the end of the century. (Image via this site).

Brazil, television
Posted by Erwin C. at 2:27 PM No comments: Links to this post

’s plan to nationalize its oil and natural gas industry has been thrown in disarray due to a lack of funds. Opposition politicians responded by strongly criticizing the government led by Evo Morales though a spokeswoman for 's hydrocarbons ministry claimed that “nationalization is continuing.” (Image via this site).

international economy, energy, Bolivia
Posted by Erwin C. at 11:55 AM No comments: Links to this post

Playing the waiting game in Mexico 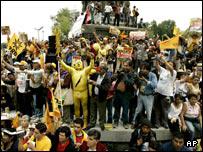 The Washington Post’s blog on ’s presidential elections has a very detailed post on the issues surrounding the electoral snafu in . Ceci Connelly discusses such issues as the possibility of a clash between police and sympathizers of Andres Manuel Lopez Obrador (image via BBC) during next month’s Independence Day celebrations as well as how Mexicans are adjusting to the protests.

Mexico, election, blogs, politics
Posted by Erwin C. at 11:39 AM No comments: Links to this post

*Blogger Wonkette takes a tongue-in-cheek look at one of the photos published on Monday between Hugo Chavez and Fidel Castro. (Link may be Not Safe for Work).

*Copper prices rise due to Chilean mine strike.

Latin America
Posted by Erwin C. at 1:47 AM No comments: Links to this post

In an opinion piece published yesterday, the director of Latin America studies at the Council on Foreign Relations says that policy towards needs to go beyond antiquated Cold War thinking and recognize recent changes in the region. According to Julie Sweig (image, via CFR), “the new generation reaching power today…reflects not Washington's wishes or nightmares, but the unique historic, ethnic and class conditions of their countries…For the United States to fashion new thinking that reflects these dynamics, it will have to exorcise the ghosts of the Cold War”.

*A look into one man’s vigilantism shows the fragmentation in the Minuteman Project.

*Financial analysts remain confident that Felipe Calderon will be the next president as the peso reached its highest point in five months.

*Thousands protested in calling for an investigation into the murder of a protestor killed during demonstrations last week.

*A survey done last week showed most voters believed that there was fraud in July’s presidential election. 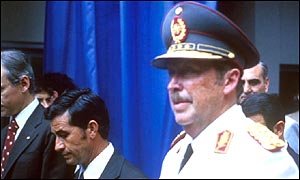 Former dictator of Paraguay Alfredo Stroessner (image, via BBC) was hospitalized in over the weekend. The 93-year-old Stroessner ruled from 1954 to 1989, longer than any other Latin American leader except for Fidel Castro.

Paraguay, Alfredo Stroessner
Posted by Erwin C. at 11:21 AM No comments: Links to this post 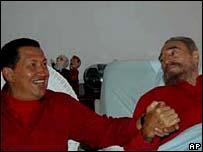 Cuban media published photos of Fidel Castro recuperating in bed on his 80th birthday along with his brother Raul and Venezuelan president Hugo Chavez. In addition Granma published a letter written by Fidel over the weekend thanking Cubans for their support but also warning that his recovery will be slow. (Image via BBC of video released Monday evening by Cuban state television ).

Cuba, Fidel Castro, Hugo Chavez
Posted by Erwin C. at 11:07 AM No comments: Links to this post