* El Salvador: A U.S. judge awarded $1.7 million to the family of a deceased Salvadoran immigrant whose deadly cancer was left untreated by prison authorities.

* Costa Rica: President Laura Chinchilla warned that she could take her country’s border dispute with Nicaragua to the International Court of Justice if a resolution is not reached soon.

* South America: Host country Argentina was drawn in a relatively easy group for next year’s Copa America while Group C could be a tight race between Uruguay, Chile, and Mexico. 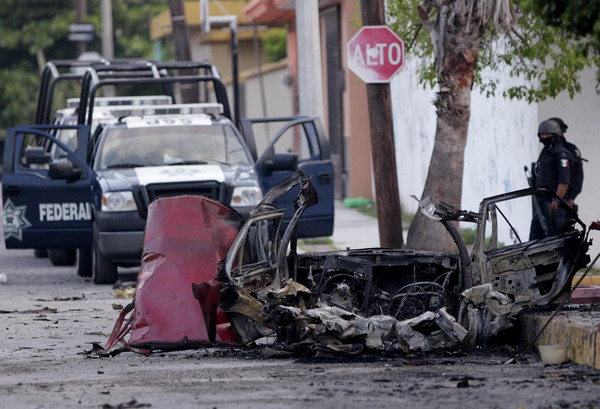 * Latin America: Freedom of the press throughout Latin America has come under fire due to increased authoritarianism and violence according to the Inter American Press Association.

* El Salvador: At least sixteen people died due to a fire in an El Salvador juvenile prison while eighteen inmates were killed during a Brazilian prison riot.

Image – China Daily (“Mexican policemen stand guard next to remains of a parked vehicle outside a studio of top broadcaster Televisa in Ciudad Victoria, the Mexican state of Tamaulipas August 27, 2010.”)
Online Sources- Knight Center for Journalism in the Americas, SI.com, Living in Peru, Bloomberg, Al Jazeera English
Posted by Erwin C. at 7:45 AM No comments: Links to this post

We'll resume our regular posts tomorrow on several news stories including the latest mining drama out of Chile and whether a Colombian proposal is discriminatory against gays.

In the meantime, did you know that today is the 41st-anniversary of the premiere episode of "Sesame Street"? In recognition of the pioneering kids show is the following video that we've featured twice before on this blog (and just so happens to be a personal favorite of mine) - Grover as the flamenco-dancing waiter:

* Mexico: According to a Department of Justice report there are “significant weaknesses” in a U.S. program designed to stem the illegal arms flow to Mexico.

* Haiti: Health officials suspect that a Haitian cholera outbreak, which was first noticed last month, has spread into the capital city of Port-au-Prince.

* Venezuela: The country’s legislature approved an initiative to build and operate a nuclear power plant with Russian assistance.

Overlooked amid all the violence in Mexico’s northern border area is the rash of murders targeting women. According to local women’s rights activists as many as 500 women have been murdered since 2003 and most of these deaths have gone unpunished. To bring attention to these crimes (and other border issues) a small group of Mexicans are participating in a unique form of protest.

Thirteen women gathered in front of the White House on Monday and commenced a hunger strike. They requested that the U.S. government pay more attention to social problems along the border region. Claiming to represent the citizens of El Paso, Texas and Ciudad Juarez in Mexico, the women claimed that border communities are not only suffering due to violence but also “crushing” poverty and a lack of resources.

One of the protesters told the Mexican press that she blamed the North American Free Trade Agreement of 1994 for doing more harm than good. Another activist tried to summarize what they stood for:

“Violence (in the border area) has become the latest layer in our reality where poverty, unemployment, a lack of opportunities and poor education surrounds us”, said 25-year-old Rubi…

According to organizers the hunger strike will be carried out at the gates of the White House only during the day for security reasons. They are also trying to deliver a letter to President Obama expressing their concerns though for the time being they have reportedly been assured of appointments with representatives of at least five different federal agencies. * Mexico: A crackdown on money laundering may hurt the interests of drug gangs but it has also been inconvenient to the growing number of foreign tourists visiting Mexico.

* Latin America: According to the U.N. inequality throughout Latin America and the Caribbean continues to grow despite the region being “the most unequal in the world”.

* Paraguay: Could a British-led expedition into Paraguay lead to the “genocide” of certain isolated indigenous tribes?

Image – SFGate.com
Online Sources- Bloomberg, MercoPress, The Guardian, The Latin Americanist, LAHT
Posted by Erwin C. at 9:00 AM No comments: Links to this post

Last week I pondered the impact (or lack thereof) that Latino voters might have in 2010.
There's always a million ways to read an election, but it is very interesting to see that the majority of polls showed Harry Reid trailing Sharron Angle by several points going into election day, but in the end he pulled out a strong win.
Political Scientist and pollster Matthew Baretto believes the Latino vote - and the failure of pollsters to poll in Spanish - explains the miss.
Nate Silver followed up quickly with the following analysis:

As a back-of-the-envelope test of Mr. Barreto’s theory, I compiled results from the eight states with the largest share of Latinos in their population: these are Arizona, California, Colorado, Florida, Nevada, New Mexico, New York and Texas. There were 15 gubernatorial and Senate races last night between these states....In 10 of the 15 races, the polling average underestimated the Democrat’s margin by at least 2.5 points.

Now the questions turn to what politicians will actually do to meet the needs of this increasingly growing constituency.
Image Source: The Fourth Branch
Online Sources: NPR, NY Times/Fivethirtyeight, The Hill, Politico
Posted by Ben G. at 5:56 AM No comments: Links to this post

* South America: On a similar note, Argentina’s Foreign Minister said that a Bolivian coronel is to blame for “a long-standing series of incidents” in the border area between both countries.

* Cuba: Dissident groups such as the Ladies in White are upset that the government has yet to release 13 of the 52 political prisoners pledged to be freed by yesterday.

* Peru: Lori Berenson could leave prison today after having been granted parole by a Peruvian judge on Friday.