* U.S.: A Pew Hispanic Center released yesterday found that births and not newly arrived immigrants are boosting growth in the burgeoning Mexican-American population.

* Brazil: Brazil will head a security operation next month that will boost the number of unmanned aircraft above the country and several of its neighbors.

Mexican tourism officials have expressed shock at the recent decision by Princess Cruises to pull out of making stops in Puerto Vallarta. A report by the federal government found that the "North Coast" region that includes Puerto Vallarta has been hit hard by criminal activity. Yet senior Mexican tourism official Rodolfo Lopez Negrete observed that:

"Mexico is a very large country," he notes. "If there are some episodes of violence up in the hills of the state of Jalisco that doesn't mean that Puerto Vallarta is an unsafe place for tourists."

Lopez Negrete draws a comparison with Los Angeles, which he notes is considered a safe tourism destination despite recurring violence in some areas of the city that aren't near the places that tourists go.

"If they kill 100 people in East L.A. that doesn't mean that I shouldn't go to Los Angeles," he says.

The following video from Al Jazeera English delves into more detail over the tourism concerns in Mexico. What do you think about the topic? 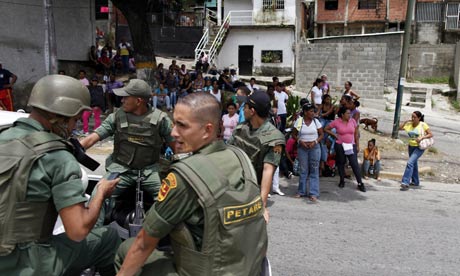 * Venezuela: The 27-day standoff between troops and inmates at the El Rodeo II prison ended yesterday though serious problems still persist in the Venezuelan prison system.

* Latin America: According to the Economic Commission for Latin America and the Caribbean economic growth in the region this year will be 4.7% though growth may dip slightly in 2012.

* Argentina: The heirs to the Clarin media conglomerate may not have been illegally adopted from political prisoners during the “Dirty War” period.

* Peru: Canadian firm Bear Creek filed a lawsuit against the Peruvian government that cancelled a mining project due to violent protests.

Image – David Fernandez/EPA via The Guardian (“Relatives of prisoners of Venezuela's El Rodeo 2 jail wait for news about the uprising, which has ended after 27 days.”)
Online Sources- El Universal, Reuters, BBC News, Mercopress
Posted by Erwin C. at 8:30 AM No comments: Links to this post 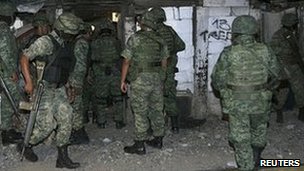 * Mexico: The country’s Supreme Court ruled that members of the military accused of human rights abuses can be tried in civilian courts.

* Venezuela: President Hugo Chavez said that he might undergo radiation therapy and chemotherapy as part of his cancer treatment.

* Chile: In the latest breakthrough for gay rights in Latin America, Chilean President Sebastian Pinera said that he would consider the legalizing of same-sex civil unions.

* Colombia: One of the world’s worst serial killers, Luis Alfredo Garavito, could be extradited to Ecuador and stand trial for murdering children.

British broadcaster Louis Theroux is best known for his documentaries where he involves himself in the story. His style of "gonzo journalism" has seen him cover a range of subjects including covering the family at the center of the controversial Westboro Baptist Church and, most recently, immersing himself in the Miami prison system.

One of his earliest pieces aired in 1992 as part of the Michael Moore-hosted TV show "TV Nation." In the clip below, Theroux looked at the business of selling Avon cosmetics to Brazilians living in the Brazilian rain forest. The tone of the video is not heavy-handed but it does reveal the deceptive techniques used by the firm to sell its concept of beauty to mostly impoverished households in the Amazon. (One Brazilian Avon saleswoman even believes that a best-selling cream can makes its customers taller).

Theroux's fortunes have improved since that video first aired nineteen years ago as he continues airing his specials on the BBC. Meanwhile, Avon has expanded its operations not only in Brazil but also Latin America; according to Reuters the region was Avon's "largest unit" accounting for 42% of global sales in 2010.

* U.S.: While Congress continues to play politics with the Panama and Colombia free trade deals, “scores of protesters” gathered across from the White House to rally against the agreement with Colombia.

* Haiti: Did the Haitian government really reject cholera vaccinations, as was clamed by the head of a Dutch pharmaceutical firm?

* Panama: The Central American country improved on international tax standards and isn’t the tax haven it used to be according to the Organization for Economic Cooperation and Development.

* Chile: Approximately 45,000 workers at state-owned mining giant Codelco went on strike to voice their opposition to a government-backed "modernization plan."

Image – semana.com
Online Sources- Reuters, Defend Haiti, The Telegraph, LAHT
Posted by Erwin C. at 8:00 AM No comments: Links to this post


* Argentina: Singer and songwriter Facundo Cabral may not have been the target of an ambush that killed him in Guatemala on Saturday but that hasn’t stopped the immense mourning throughout the Americas.

* Latin America: Mexico won its second U-17 men’s soccer title in six years with a 2-0 victory over Uruguay while the U.S. eliminated Brazil from the Women’s World Cup in a thrilling quarterfinal match.

Video Source – euronews via YouTube (Argentine folk singer Facundo Cabral was tragically gunned down over the weekend while visiting Guatemala).
Online Sources- LAHT, CBC, USA TODAY, MSNBC, insidecostarica.com
Posted by Erwin C. at 9:00 AM No comments: Links to this post