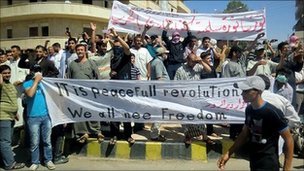 * Syria: Thousands of people took to the streets in an act of defiance against a harsh government crackdown while the U.S. may bring up war crimes charges against Syrian President Bashar Assad.

* Switzerland: By a narrow margin the U.N. Human Rights Council backed a resolution supporting equal rights for gays and lesbians.

* Saudi Arabia: Dozens of Saudi women drove their cars today in protest against the government’s ban on female driving.

* World: The International Monetary Fund lowered its financial forecasts for the U.S. and Britain but also claimed that global growth will “remain on track.”

* Haiti: Over fifty groups including the American Civil Liberties Union called on the U.N. to pressure the U.S. to halt the deportations of convicted criminals to Haiti.

* Mexico: Authorities arrested the suspected leader of the Juarez drug gang who goes by the nickname "El Brad Pitt."

* Argentina: President Cristina Fernandez de Kirchner blasted the British government as “arrogant” for refusing to negotiate over the sovereignty of the Falklands.

* Guatemala: Five couples filed a lawsuit against a Pennsylvania adoption agency that supposedly tried to scam them when they tried to adopt Guatemalan children.

Image – AlterNet (“Haitians stand in front of the main US Immigration office building as they watch others protest in Miami in 2006.”)
Online Sources- MSNBC, BBC News, Reuters, MiamiHerald.com
Posted by Erwin C. at 10:45 AM No comments: Links to this post

During his official visit to Puerto Rico on Tuesday, U.S. President Barack Obama gave his support to a referendum to decide the commonwealth's political status. Even though it was the first trip by a sitting U.S. president in fifty years was the four-hour visit really worth it? "The Daily Show" tried to answer that question in a segment that first aired last night:

Online Source - BBC News
Video Source - The Daily Show
Posted by Erwin C. at 9:30 AM No comments: Links to this post 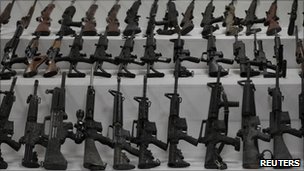 * U.S.: Federal officials were blasted during a congressional hearing yesterday regarding “Operation Fast and Furious”, a sting operation to track weapons purchases into Mexico that backfired.

* Uruguay: This year’s Copa Libertadores champion will be decided next week after the first game of the finals between Penarol from Uruguay and Brazil’s Santos ended scoreless.

* Venezuela: While President Hugo Chavez continues to recuperate from pelvic surgery in Cuba, Venezuelan legislators debate whether it’s legal for him to rule from abroad.

* Colombia: Former president Alvaro Uribe has some explaining to do later today in front of a congressional panel investigating an illegal wiretapping program by intelligence agents.

Image – Reuters via BBC News (“Agents of the Bureau of Alcohol, Tobacco, Firearms and Explosives said they saw hundreds of guns sold.”)
Online Sources- CBS News, Colombia Reports, Bloomberg, SI.com
Posted by Erwin C. at 8:00 AM No comments: Links to this post

This past Tuesday was World Blood Donor Day. In honor of it, the following video is a friendly reminder of the need for the Latino community to help others by donating blood: 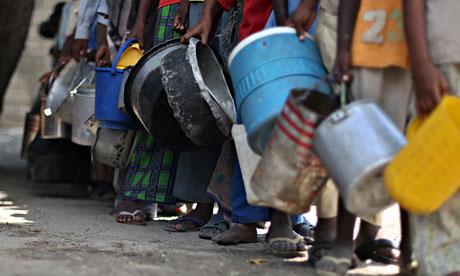 * World: A study backed by Oxfam concluded that the global population “especially in the world’s poorest countries, are cutting back on the quantity or quality of the food they eat because of rising food prices.”

* U.S.: In a report to Congress, President Barack Obama claimed that the current mission in Libya doesn’t require legislative approval under the War Powers Resolution.

* Greece: Prime Minister George Papandreou brought up the possibility of stepping down in response to mass protests and a national economy in dire straits.

* Sudan: According to the U.N. and several aid workers, “dozens of people” were killed in an internal border area of Sudan.

Image – AFP via The Guardian
Online Sources- AFP, MSNBC, Reuters, Bloomberg
Posted by Erwin C. at 9:00 PM No comments: Links to this post

A report published today on health care in the U.S. appears to confirm an interesting phenomenon known as the “Hispanic paradox”.

The study by the Institute for Health Metrics and Evaluation (IHME) found that life expectancy in the U.S. varies significantly from county to county. In the case of Los Angeles County in California, that area has one of the highest life expectancies in the country despite a poverty rate above the national average. Researchers believe that the reason for this could be the “Hispanic paradox”, a phenomena found in previous studies over the past several decades including a 2010 Centers for Disease Control report. The idea is that Latinos live longer than those in other ethnic categories despite facing adverse socioeconomic factors (e.g. lower education, high indices of diabetes and obesity).

According to the Los Angeles Times there are several possibilities explaining how the paradox can be seen in the IHME study:

Nearly half of Los Angeles County's 10 million residents are Latino, and more than a third are foreign born, according to census data. By contrast, less than a sixth of the population nationally is Latino, and less than an eighth is foreign born.

One explanation of that phenomenon is that the people who become immigrants tend to be healthy. "These are not random people. They are the healthiest people who could get here," said Carmen Nevarez, former president of the American Public Health Assn.

But David Hayes-Bautista, who heads the Center for the Study of Latino Health and Culture at UCLA, said other factors, including social support networks, diet and even physical labor, may play a role as well, because not all immigrants have such good health outcomes as Latinos.

People in several developing countries have more longevity than some U.S. counties based on the report. Women in five Mississippi counties have life expectancies below 74.5 years, which is lower than Honduras, El Salvador, and Peru. 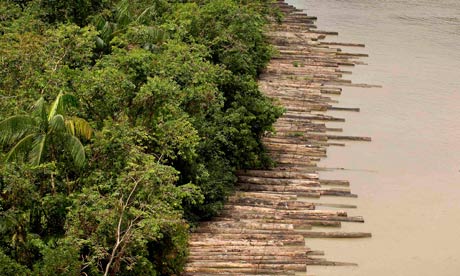 At least five environmental activists have been killed in Brazil over the past month with the latest killing occurring this week.

Obede Loyla Souza, described by the AP as a “landless peasant activist”, was shot dead in his residence located in the Amazon state of Para. Souza and other landless peasants helped organize a settlement in 2008 called Esperanca, (Hope in Portuguese), in an area of unclaimed farmland. They farmed on small plots of land and faced constant danger from illegal loggers in the area.

Local land rights groups suspect that Souza’s death may be linked to his work. The local Pastoral Land Commission (CPT) claimed that Souza recently received death threats after he confronted several loggers illegally chopping down trees. The CPT further denounced that on the day of his death a suspicious “van with tinted windows” entered Hope. Yet one local police official claimed that Souza’s murder was not linked to the land conflict but instead due to an “internal motive.”

The recent spike in deaths of environmental activists (including two eyewitnesses to one of the murders) has caught the attention of the federal government. According to Brazzil Magazine president Dilma Rousseff ordered this month the deployment of soldiers into several Amazon states including Para and Rondonia where the activists have been murdered. Yet it may be a short-term solution for the long-term problem of land rights in Brazil as mentioned by Amnesty International (AI):

“As Brazil’s economy continues to boom and rural land is increasingly being sought for agriculture and other development, the authorities must ensure that human rights abuses against local communities come to an end,” said (AI researcher) Patrick Wilcken.

“The authorities must complete the region’s land-reform process and bring long-term security to the threatened communities.”

There are occasions in our lives when we run away from our mistakes and try to escape the consequences of our actions. But what happens when we decide to confront those situations after trying to avoid them for many years?

This is the situation faced by Andres, the protagonist in the Chilean film "La Vida de los Peces" ("The Life of Fish"). Santiago Cabrera acts as Andres, a writer who returns to his homeland of Chile after spending a decade working in Europe. At a party he bites the bullet to face old friends he abandoned due to tragedy and a certain special someone he can avoid no longer.

"Peces" is a highly-charged and emotional drama directed by Matias Bize that has gained critical recognition in several countries. This month the movie was the only non-European film to win one of the top prizes at the Portuguese film festival. Such an honor goes along with winning Spain's prestigious Goya film prize earlier this year as the top film in the Spanish-speaking world.

The following is the trailer to "Peces" with English subtitles. Enjoy! * Chile: The strong eruptions from the Puyehue volcano has not only forced the cancellation of hundreds of flights in the Southern Cone countries but it could delay the start of the Copa America soccer tournament.

On Tuesday, U.S. President Barack Obama will travel to Puerto Rico as part of an official visit to the commonwealth. Obama is scheduled to arrive in San Juan at around noon and he is expected to give a speech, travel to the governor's mansion and attend a fundraiser in the five hours he will be on the island.

The White House has published few additional details on the president's visit including who will be among the estimated 1000 attendees to welcome Obama at Muniz air force base. It's also unknown what topics he may discuss with Gov. Luis Fortuno such as Puerto Rico's future political status or the island's stagnating economy.

As Roque Planes of the Americas Society wrote, the timing of Obama's visit may have more to do with voting Boricuas residing on the mainland than those living on the island:

Obama may have other reasons for timing the trip this month. The Latino vote proved key for Obama during his 2008 campaign, but he has moved slowly to address immigration reform—one of the constituency’s highest priorities. Shortly after formally announcing his reelection bid in April, Obama began aggressively reaching out to the Hispanic leadership. He held well publicized meetings within weeks with high-profile stakeholders including media mogul and New York City Mayor Michael Bloomberg, actress Eva Longoria, and journalist José Díaz-Balart. He renewed his call for the DREAM Act during a commencement speech at Miami Dade Community College on April 29 and he called for comprehensive immigration reform at El Paso on May 10.

Obama last visited Puerto Rico as a presidential candidate in 2008 though his trip tomorrow will mark the first by a sitting U.S. president in fifty years. President John F. Kennedy traveled to the island in 1961 and in the video snippet below he received a warm welcome from Gov. Luis Munoz Marin: 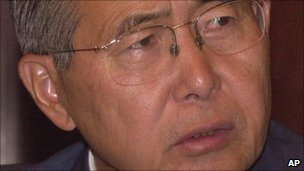 * Peru: President-elect Ollanta Humala reportedly said that he would be willing to grant a pardon to imprisoned ex-leader Alberto Fujimori due to humanitarian reasons.

* Chile: Michelle Bachelet, former Chilean president and head of the U.N.’s agency on women, stressed that prevention is the key to combat sexual violence against women.

* Latin America: During a brief visit to Latin America Chinese Vice President Xi Jinping said that his country is “ready to work with countries in the region to raise mutual exports of value-added products, and increase the scale of trade.”

* Cuba: Both environmentalists and oil firms have united to call for an easing of U.S. embargo guidelines on Cuba that they believe would hinder the response to possible oil spills.

Image – AP via BBC News (“Former president, Alberto Fujimori, was sentenced to 25 years in jail in 2009” due to human rights violations).
Online Sources- U.N. News Center, Bloomberg, Reuters, Bizjournals.com
Posted by Erwin C. at 7:45 AM No comments: Links to this post