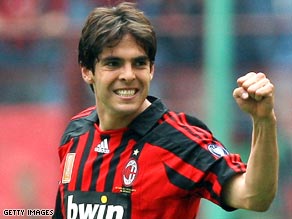 Update (10.00pm):
Real Madrid announced that they signed Kaka to a six-year deal including a record $90 million transfer fee. That is expected to be confirmed at a press conference on Tuesday formally introducing the Brazilian to the historic soccer side. (Link via Guardian UK).

Original Post:
Brazilian international Kaka is about to say “ciao” to Italy in a megabucks deal to be soon announced.

Though he told the Italian press that he would not leave AC Milan, the 2007 FIFA World Player of the Year has cleared a physical as part of a rumored transfer to Spain’s Real Madrid. A statement by the Brazilian Football Federation confirmed that a Real Madrid doctor examined the star midfielder in Recife where he’s training for Wednesday’s World Cup qualifier versus Paraguay.

The planned transfer fee for Kaka is would be a new record for a soccer player: an unprecedented $100 million. Yet it’s all part of a plan to rebuild Real Madrid into a super-expensive, superstar-filled squad:

Returning Real president Florentino Perez was previously in charge of the Spanish club from 2000 to 2006 - during the famous Galacticos era.

Perez's comeback is on the back of a pledge to relaunch another Galacticos era, with Kaka one of his chief targets.

Milan chief executive Adriano Galliani said last week that any transfer of Kaka would be done for "solely economic" reasons. Galliani added that the club was losing about $99 million yearly and “we can't afford to miss out on $100 million."

Back in January, Kaka rejected a $100 million transfer to join fellow countryman Robinho to play for Manchester City.

Considering how his name is pronounced in Spanish, if he goes to Real Madrid, the sportscasters are going to have a problem keeping a straight face.

I think the sportscasters are minimally professional enough not to snicker at his name, especially if they've narrated World Cup &/or Champions League matches featuring Kaka.

Then again, one Spanish PA announcer had some phone word play with a player named Webo & a euphimism (sp) for a rival team's testicular fortitude. So you never know!
http://www.guardian.co.uk/football/blog/2009/jun/08/sid-lowe-review-la-liga-2009-season

Sorry, I meant to say "funny word play" at the start of the 2nd paragraph.