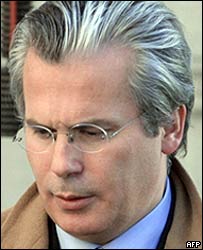 According to the Spanish press, the group planned to kill Garzon by using poisoned brandy delivered to the judge via a false admirer. The smooth liquor was to be accompanied by a note praising his role in several high profile human rights cases such as the 1998 attempt to extradite ex-Chilean strongman Augusto Pinochet.

The plot was uncovered by police among several shredded documents in the possession of ETA military chief Jurdan Martitegi who was arrested earlier this year.

Garzon aimed his crosshairs in April at several members of the Bush administration for alledgedly permitting torture at the Guantanamo detention center. His desire for justice for the Spanish victims under the dictatorship of the late Francisco Franco may’ve gone too far:

The Supreme Court has agreed to probe a complaint lodged by the tiny far-right trade union Manos Limpias, which accuses Garzon of having investigated the alleged human rights violations of Spain's 1939-75 dictator Francisco Franco without having the authority to do so.